A correspondent of the News Agency of Nigeria(NAN) reports that the hoodlums were seen in their numbers carting away bags of rice, noodles, salt and gallons of vegetable oil.

They had earlier in the day blocked the Muritala Mohammed Highway, restricting vehicular movement.

As at the time of this report, men of the Nigerian Police Force, who just arrived the scene, were seen trying to restore order,

However, dispersing the crowd that had built was a herculean task as more and more people were seen trooping to the warehouse despite sounds of gunshot.

NAN also reports that some of the people seen carting away items from the warehouse were heard saying “the food is ours but they are keeping it for themselves”.

Gov. Ben Ayade has imposed a 24 hours curfew in the state starting from 6 p.m. on Friday.

Residents are advised to observe the curfew as security agents have been mandated to arrest anyone who flouts the order. In another development, the EndSARS protest took another twist in Lagos on Thursday, October 22, when some youths of Maza-Maza, Mile 2 area of the state uncovered a warehouse in the area stocked with COVID-19 palliatives. 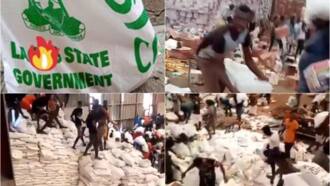 The palliatives were perhaps the foodstuffs meant to alleviate the effect of the lockdown and the economic meltdown on the poor populace in Lagos state from March when the lockdown took effect.

Also recall that Legit.ng reported that less than twenty-fours after some youths stormed the warehouse in Lagos, hundreds of youths on Friday, October 23, burst the Cocoa House in Ede area of Osun state and looted various food items kept in it.

The youths and residents thronged the area around 11:40 am and carted away packs of noodles, rice, sugar, garri, and other food items kept for COVID-19 palliatives.

Legit.ng gathered that some of the youths came with motorcycles, buses, and other means of transportation to convey food looted from the warehouse.