An actress posing as Sacha Baron Cohen’s daughter in the new Borat movie was able to gain admittance to the White House last month – making it steps from the Oval Office and touring the press areas and grounds north of the White House.

The comedian tweeted out promo footage of the encounter hours after the release of his new film, which includes footage of a staged encounter with Trump lawyer Rudy Giuliani that the comedian defended as a ‘honey trap.’

DailyMail.com was present at the White House when OAN correspondent Chanel Rion conducted an interview of the actress while being trailed back and forth by a camera and sound crew on September 16.

The film character Borat tweeted out footage of the day-trip Friday, mocking what the account cast as a security breach. ‘Trump very careful who he let into his events and house. No Covid test necessary – High 5!’

He attached footage of Bulgarian actress Mara Bakalova, who in the movie plays Borat’s daughter Tutar Sagdiyev, being interviewed by Rion.

The Borat character mocks the conservative network as ‘most rigorous news source in America,’ and includes footage of Trump calling on ‘OAN’ and Rion claiming to have uncovered ‘multiple crimes’ in Ukraine committed by the Bidens.

The White House visit is one of three encounters which span months. Bakalova – who at the time was brunette – was both at a Trump reception for supporters in Phoenix and shook hands with Don Jr. at the CPAC conservative conference, both in February.  She visited the White House – this time with blond hair – in September, two months after the Giuliuani encounter. Bakalov is 24, but her character in the movie is his 15-year-old daughter.

The footage of her encounters with Trump and the first family were released on Twitter and are not in the movie itself, suggesting that there may be more material coming from Baron Cohen’s production team.

The Borat character posted footage of actress Maria Bakalova, who plays his daughter in Borat 2, being interviewed by OANN’s Chanel Rion at the White House. A Marine stationed behind them indicates that the president was in the West Wing 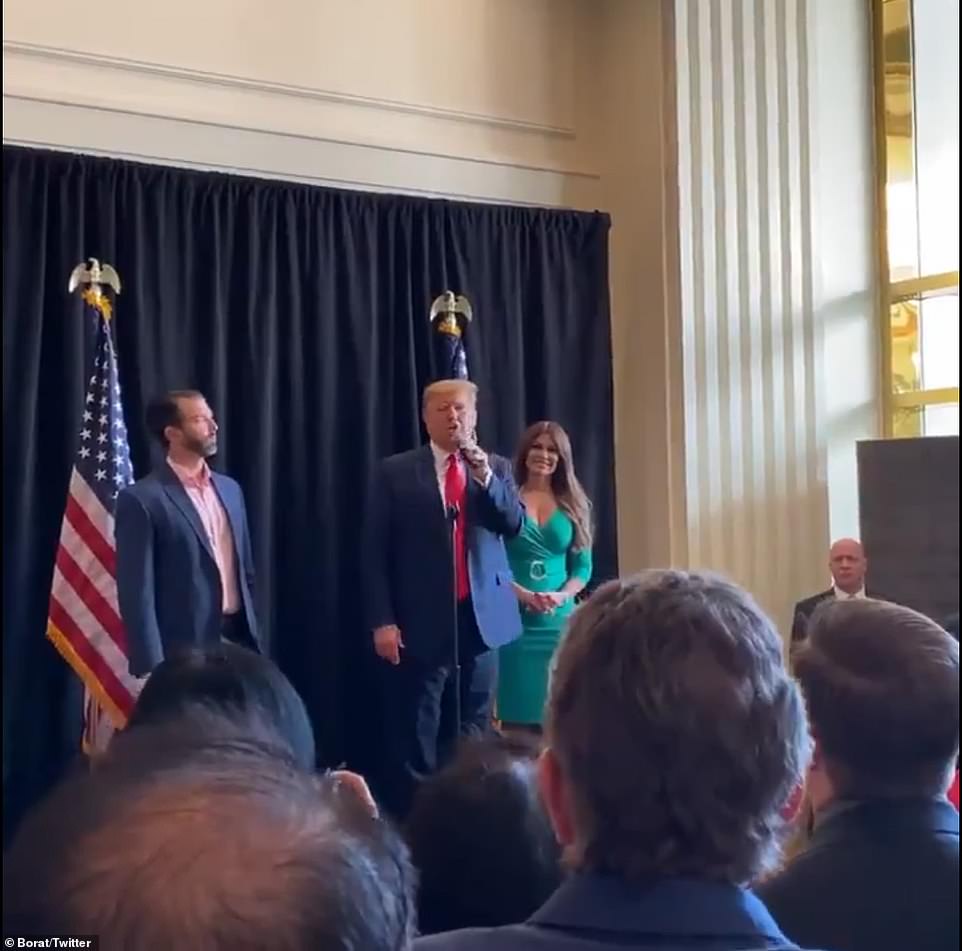 At event: ‘Borat’s daughter’ was also at this Trump reception on February 19 before a rally in Phoenix. The camera pans from Trump to show the actress 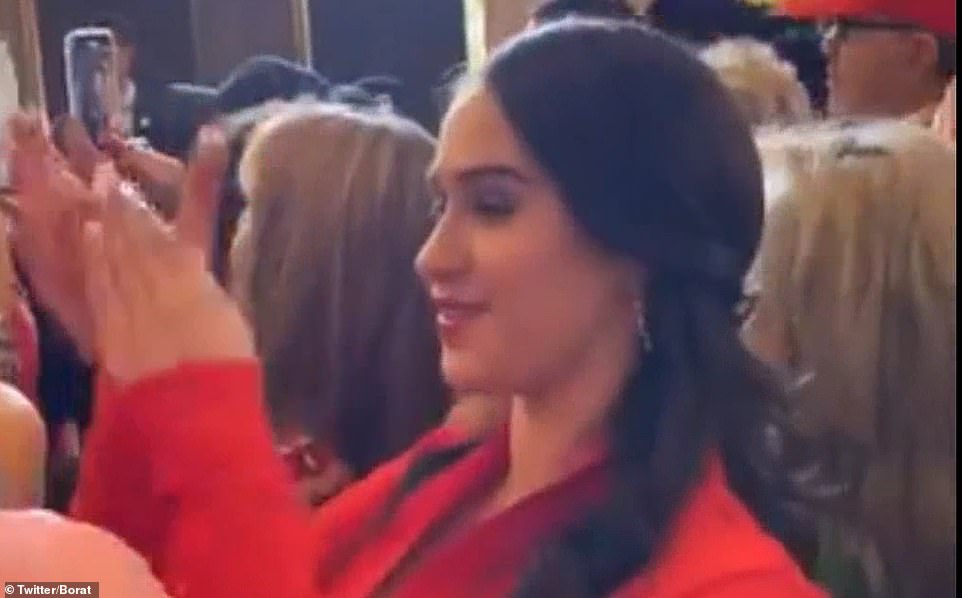 Applauding the president: This is Maria Bakalova as the camera pans from Donald Trump, his son Don Jr. and Kimberly Guilfoyle at a reception for supporters on February 19. She changes from brunette to blonde in the course of the movie 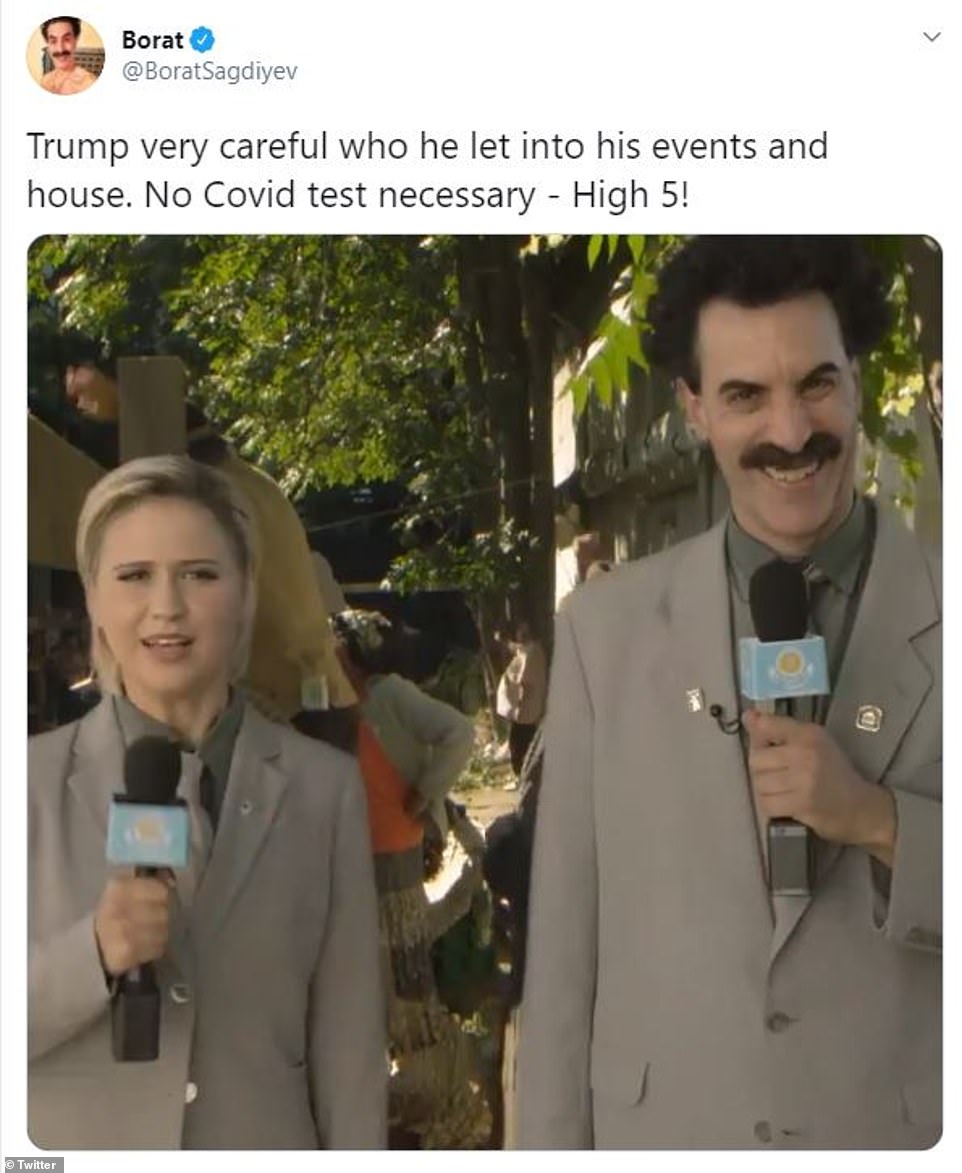 The crew didn’t come with the correspondent, and is believed to be associated with the interview subject and actress.

The film clip raises serious questions about security and safety at the White House.

September 20 was just days before the superspreader unveiling of SCOTUS nominee Amy Coney Barrett, and a time when people coming on to White House property were supposed to be tested for coroanvirus.

But in the clip, narrated in character by Baron Cohen, he said: ‘I know this because they take my daughter into the White House,’ he said – as the short video switches to footage shot on the north lawn with Bakalova. She also tours the White House briefing room, which is right outside the West Wing offices used by the president and his staff.

‘No need for security test or COVID test. They boring,’ he said.

It is unclear how an actress would be able to access the executive mansion in the identity of her character – and particularly given that Baklova is Bulgarian, not American. DailyMail.com has asked the White House for comment.

The Borat clip identifies the White House clip as September 20, although DailyMail.com obtained footage of the encounter on Sept. 16.

She may have been a guest of Rion, a controversial figure who crashed White House COVID briefings and refused to wear a mask, and who has opened a feud with the White House Correspondents Association over their attempt to curb numbers of journalists on the property during the pandemic.

Rion has partied at Mar-a-Lago and boasts close ties to Giuliani – ironically the target of the most high-profile stunt by Borat.

However the film crew which recorded the interview did not come with Rion, and is believed to be associated with the interview subject and actress.

At the White House, Bakalova asks Rion: ‘Why is all of the fake journalists for the left, and none on the right?’ DailyMail.com has asked Rion and OANN for comment.

The scenes at the White House got cut and didn’t make it into the movie, titled ‘Borat Subsequent Moviefilm.’

The clip then shows Bakalova in character with dark hair attending an event with President Trump, Donald Trump Jr. and his girlfriend Kimberly Guilfoyle.

She is shown clapping wildly while the president speaks. The event appears to be a reception for supporters before a rally in Phoenix’s Veterans Memorial Coliseum on February 19.

On stage, Trump is flanked by his son and Guilfoyle, who addressed the rally he held that evening.

In a different cut, she shakes hands with the president’s eldest son and proclaims herself ‘a little bit nervous’ and ‘excited to meet you.’

The footage with Don Jr. appears to have come during a Turning Point USA event during the Conservative Political Action Conference in late February.

‘I’m a little bit nervous but I’m very excited to meet you,’ she tells Don Jr.

‘I appreciate it. Good to meet you,’  he replies.

At the same conference, Sacha Baron Cohen, playing Borat but dressed up as President Donald Trump, ran into the hall where Vice President Mike Pence was speaking carrying Bakalova. ‘Michael Pennis! I brought a girl for you!’ Cohen yelled.

This scene made the movie, while the footage from the promo released Friday with Rion did not

It was the second time the movie ripped through U.S. politics, after the release of footage showing Borat’s ‘daughter’ in a hotel room with Trump lawyer Rudy Giuliani.

In one scene, Giuliani falls back on a bed after she removes his microphone after getting pranked into an interview. He briefly puts his hands in his pants, but the former New York mayor said he was simply tucking in his shirt after it got messed up when the microphone was being removed.

Sacha Baron Cohen stepped back into his Borat character on social media on Thursday to comically defend the scene.

The comedian released the tweet about the highly anticipated sequel ‘Borat Subsequent Moviefilm’ Thursday evening around 8pm, just one hour before the second presidential debate and one day before its scheduled release date. 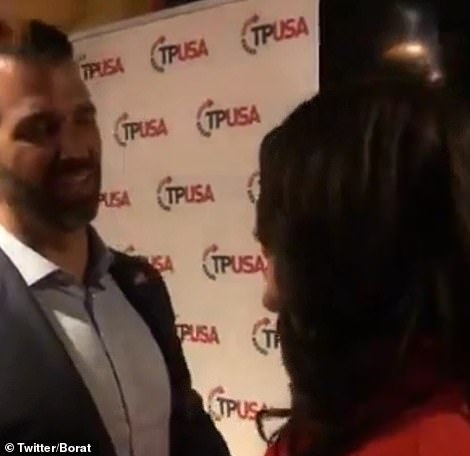 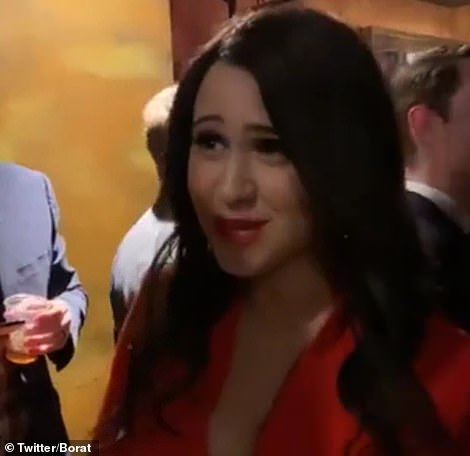 First family encounter: Her greeting with the president’s son happened at a Turning Point USA event that was part of the Conservative Political Action Conference, where Cohen dressed as Trump and crashed a Mike Pence speech 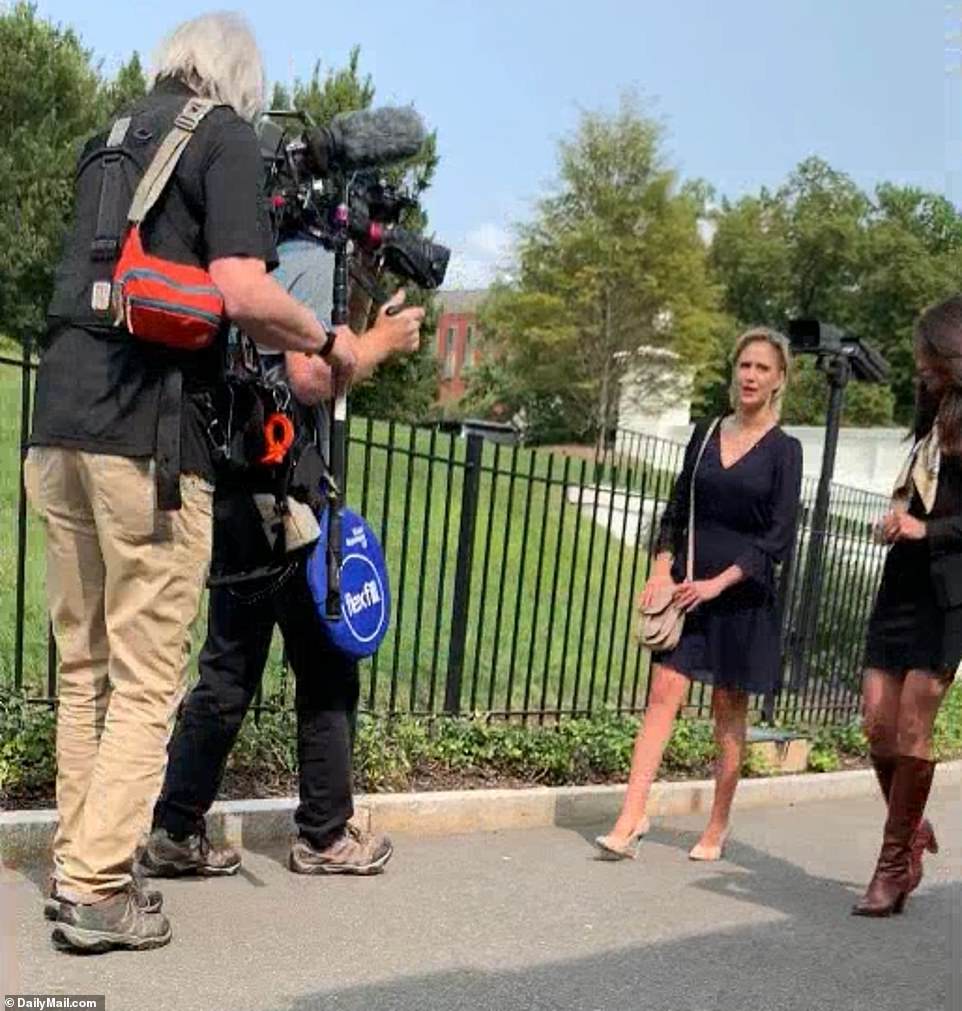 A DailyMail.com reporter spotted the unusual encounter at the White House on September 16, with ‘Borat’s daughter’ talking to Chanel Rion, the controversial OAN correspondent. The Borat twitter account labeled it September 20 ‘Year of Hawk 435’ 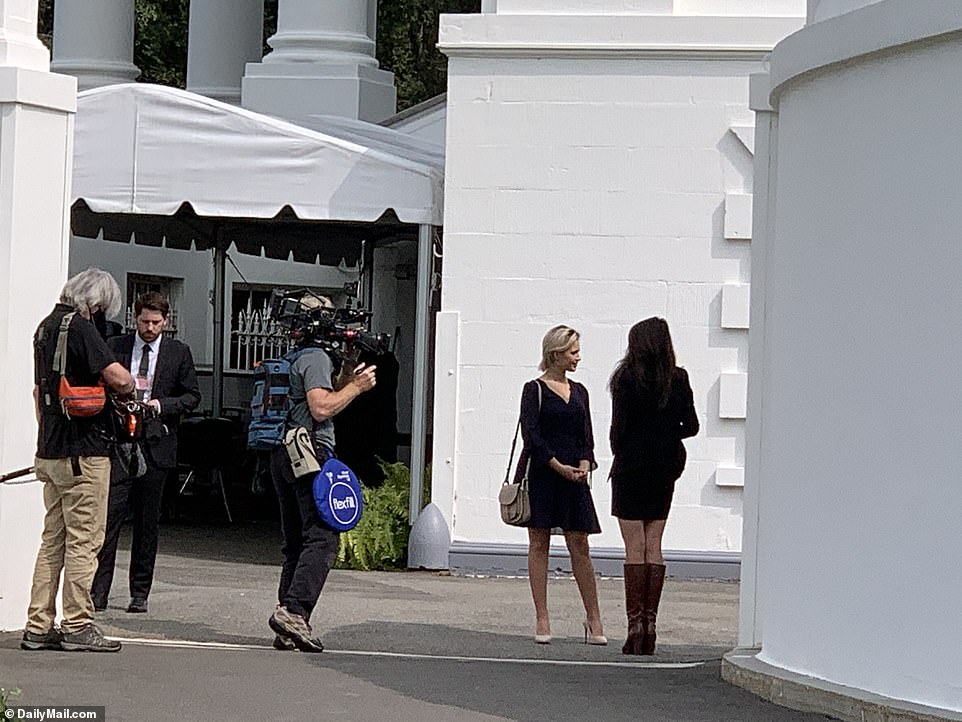 Walk and talk: In the course of her time at the White House, accompanied by a camera and sound crew, Maria Bakalova, posing as Borat’s daughter, also walked outside the north doors of the Palm Room, which leads to the Rose Garden 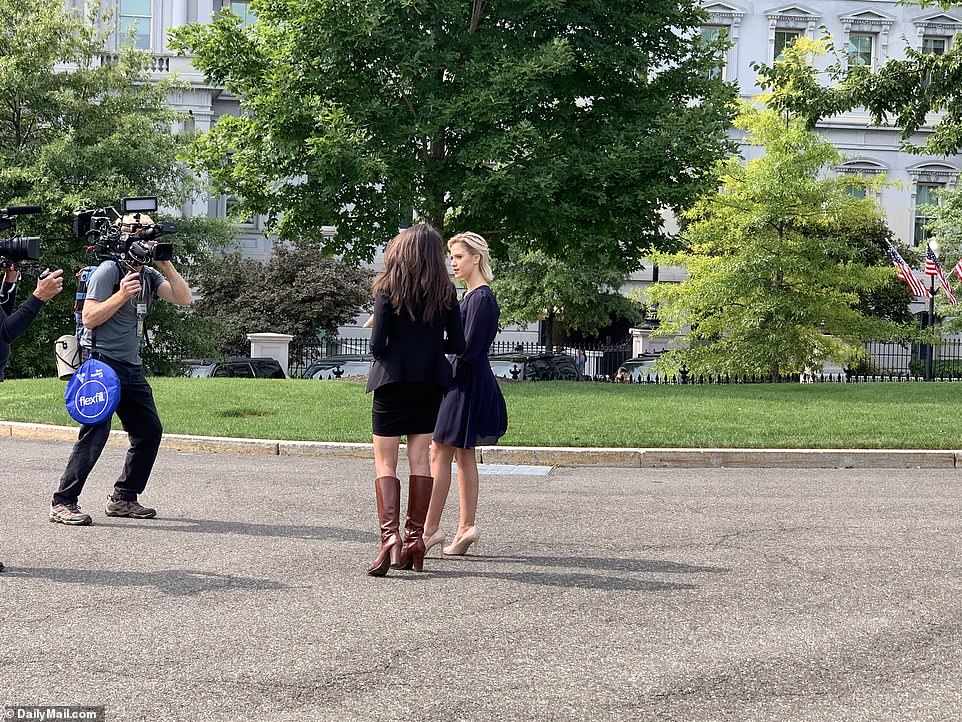 The actress was trailed by two cameras during the interview at the WHite House on September 16, which didn’t make it into the final film

Maria Bakalova is seen taking off the microphone of Rudy Giuliani in the new ‘Borat Subsequent Moviefilm,’ which will be released on Amazon Prime Friday 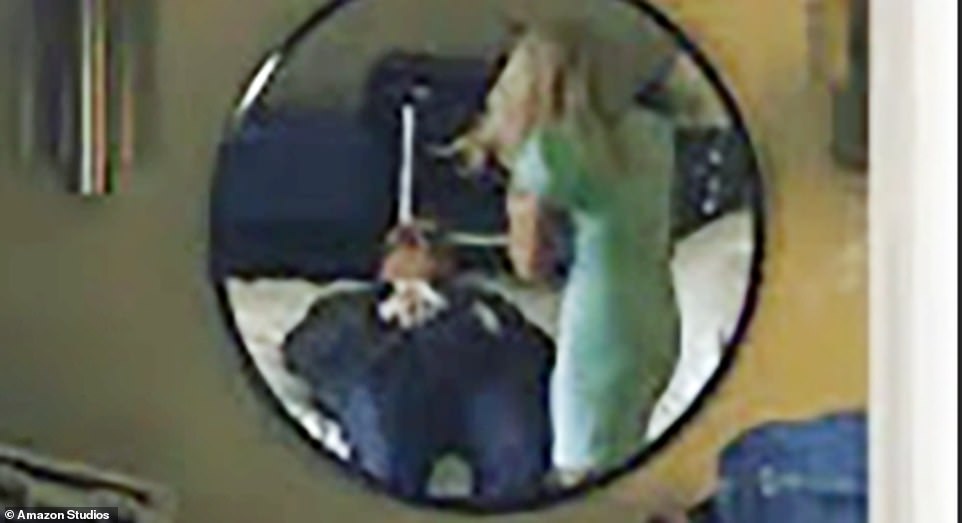 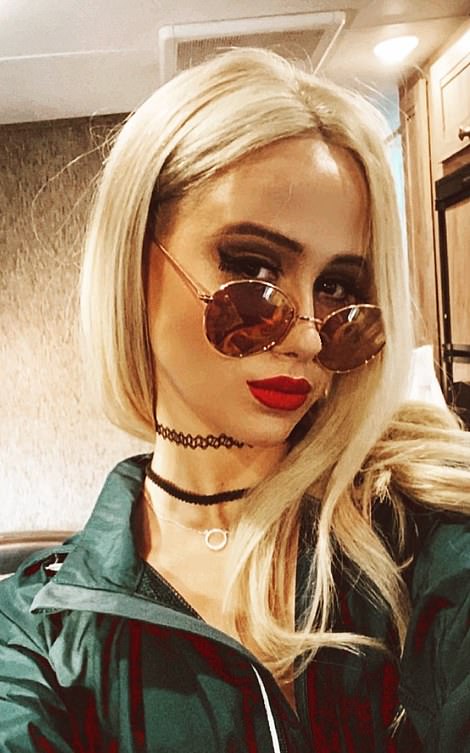 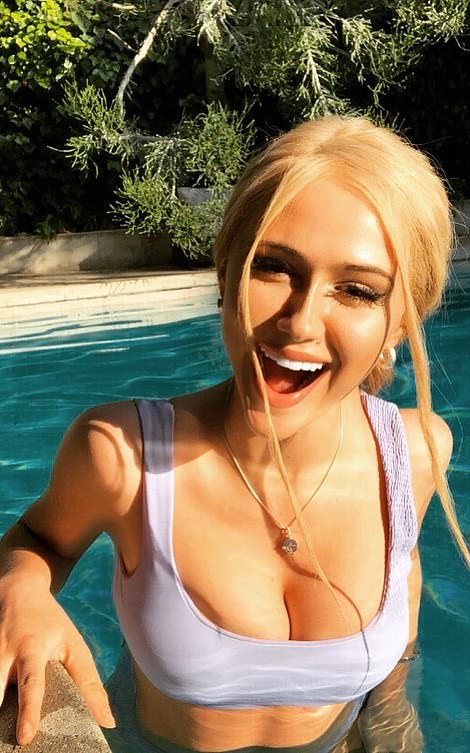 Maria Bakalova, who graduated from film school last year, has skyrocketed to international fame after it was revealed last night she honeytrapped Donald Trump’s senior lieutenant and former mayor of New York Giuliani in the new Borat movie