Popular Nigerian singer David Adeleke aka Davido may have taken some time off the music industry, but with his latest single Fem, the music star has once again proven why he deserves to be ranked among the best in Africa.

Among those who have taken time to share in Davido’s glory and congratulate him is top media executive, Chief Dele Momodu.

The veteran journalist recently took to his official page on Twitter to offer his congratulations to the music star following the success Fem.

The music video for the song garnered over 5 million views on video streaming platform, YouTube, just within a few hours of its release. 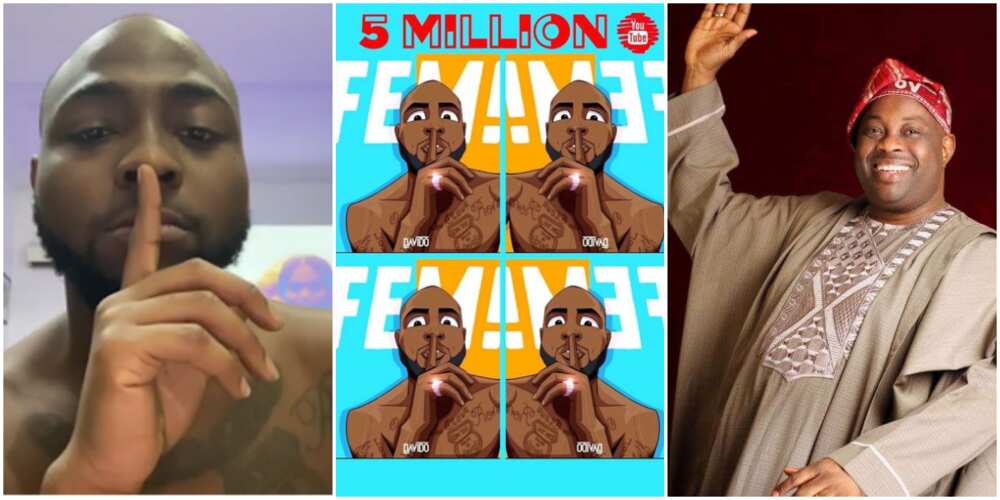 Reacting to the tweet, the singer who has been known to have an altercation with the media executive in the past, was quick to appreciate him for the congratulatory message.

Interestingly, Davido described Momodu as his ‘father’ in his response to the congratulatory tweet.

Check out the exchange between the two below:

Read what they had to say below:

In a related story about the top singer, Legit.ng earlier reported that he was among Nigerians who took to social media in awe after billionaire businessman, Femi Otedola, gifted his three daughters with a brand new Ferrari ride each.

Davido in a post shared on his Twitter page congratulated DJ Cuppy who had shared photos of the brand new cars from her father.

The 30 BG crooner who also has daughters from different baby mamas prayed to the almighty to make him carry out the same gesture for his daughters in future.

“Congrats cuppy. I will do the same for my daughters one day AMEN .. chai money good,” the singer wrote on his Twitter page.

Davido or Wizkid: whom would you rather hang out with? | Legit TV