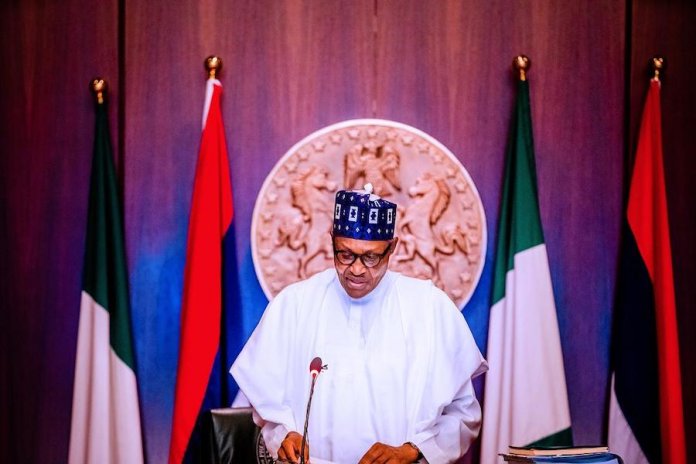 In a veiled response to the allegation by former President Olusegun Obasanjo; Nobel laureate, Prof. Wole Soyinka, and other notable Nigerians that President Muhammadu Buhari, has mismanaged the country’s diversity, the president yesterday promised to work towards greater inclusiveness and participation of all Nigerians in the affairs of the country.

Speaking when he unveiled Nigeria’s 60th independence anniversary celebration logo in the Council Chambers of the Presidential Villa, Abuja, Buhari argued that Nigeria is the most prosperous black nation.

The president, who unveiled the logo before the commencement of the virtual Federal Executive Council (FEC) meeting, said the unveiling ceremony marked the formal launch of a series of activities commemorating the diamond jubilee of Nigeria’s independence.

He disclosed that Nigerians from all walks of life participated in making the choice of the logo.

According to him, the responsibility before him at yesterday’s event was to proclaim a theme in commemoration of the anniversary that would strengthen the country’s unity, and assist the country in evolving “critical pillars which our 11 month’s modest commemoration activities will rest on.”

Buhari noted that the 60th year independence of the country ought to be celebrated amid pomp and ceremonies, adding, however, that the outbreak of the COVID-19 pandemic, which had virtually tuned the global community into a recluse, would force Nigeria to have a low key celebration.

However, he said the limitations placed on the country by COVID-19 notwithstanding, the federal government opted to get Nigerians involved in the choice of selecting the best of the four choices of logos it created through the internet.

He said of the four logos presented, the one the government eventually chose was Nigerians’ choice in an apt reflection of the theme of the anniversary.

He said the selection option accorded Nigerians was meant to denote Nigeria’s sense of togetherness, despite its huge population of over 200 million people, describing Nigeria as a nation blessed with “natural talents, grits and passion glitter like the precious diamond.”

He also described his current government’s move as enough appreciation for both the country’s assets and its people, saying Nigerians live everywhere and shine like diamonds.

He said: “The task history has saddled me with today is to proclaim a theme that will keep us united, help us forge ahead and unveil a logo that will form the critical pillars, which the eleven months’ modest commemoration activities will rest on.

“Celebrating 60 years of independence really calls for pomp and pageantry, but the global COVID-19 pandemic, which has forced all nations in the world to think and act differently, has also forced on us the imperative of a low-keyed celebration.

“Operating within the limitations placed by the COVID-19 pandemic, we created an internet challenge for Nigerians to make a choice from a set of four pre-selected logos that will appropriately define the theme.

“Of these four options, Nigerians from all walks of life participated in making a choice and I’m happy to let you know that the logo I will be unveiling is a product of choice from the Nigerian people.
“I’m informed that the selected option depicts our togetherness; a country of over 200 million people, whose natural talents, grits and passion glitter like the precious diamond we are.

“This to me, is a sufficient appreciation to our most precious assets; our people. Everywhere you go, Nigerians are sparkling like diamonds in the pack, whether in academia, business, innovation, music, movie, entertainment and culture.”

Buhari said the neatly encrusted diamond on the Nigerian map symbolises its age of treasure, the worth of the Nigerian people, who sparkle to the admiration of the world.

“In the same vein, the fair green and the dark green colour should respectively remind us of our warmth, welcoming spirit and love, as well as the abundant wealth inherent in our human capital and the richness of our land,” he said, adding: “All these properties made us, unarguably, the most prosperous black nation in the world and Africa’s largest economy. It is, therefore, with a deep feeling of national pride that I hereby announce to you that ‘Together shall we be’ shall be the theme of our nation’s 60th anniversary celebration.”

The president stated: “Our founding fathers, in spite of differences in faith, tribe and tongue, came together to fight for Nigeria’s independence. This shall be a befitting tribute to the struggle of our heroes past.

“It is to the glory of God and in celebration of the attainment of the diamond age of 60 by our great nation that I hereby unveil the preferred anniversary logo for this momentous occasion in our national history.

“At this juncture, let me thank members of the inter-ministerial committee on Nigeria’s 60th anniversary celebration for the work they have done so far and remind them that this is just the beginning.

“As we celebrate this anniversary, this government will work towards greater inclusiveness and look forward to the participation of all Nigerians.”

Also speaking at the event, Secretary to the Government of the Federation, Mr. Boss Mustapha, who is also the Chairman of the Inter-Ministerial Committee of Nigeria at 60, said unveiling the logo yesterday, marked the official commencement of the diamond jubilee.

“One major agreement also was the need to deviate from the norm of celebrating our landmark events with a conclusion of the day of such an event. Thus, it was agreed that to make the diamond anniversary very inclusive and create opportunities for internalisation and buying by all sectors of Nigerian people, a year-long celebration will be pursued, starting from the date of launching a web portal, to September 30th, 2021.

“I am happy to inform you today that the unveiling of the logo is the second milestone of the celebration, but it actually marks the official take-off of Nigeria’s 60th anniversary celebration.

Kindly permit me to provide a little background as to the theme, processes for selection of logo, eventual outcome and outstanding elements, as well as the rationale for a year-long celebration.

“The inter-ministerial committee had a robust discussion and argument on the theme and finally settled on the one that recognises our sojourn in nationhood, identified challenges faced all through and what is required to move Nigeria to its enviable stage among the comity of nations.