– Ortom made the allegation in a statement on Saturday, August 29, through his spokesperson Terver Akase

Governor Samuel Ortom of Benue state has alleged that the federal government is colluding with the National Assembly to allow herdsmen to grab land under the guise of the National Water Resources Bill.

Ortom in a statement on Saturday, August 29, through his spokesperson, Terver Akase claimed the provisions of the bill granted herdsmen unhindered access to river basins, adjacent marine and coastal environments across the country, The Tribune reported. 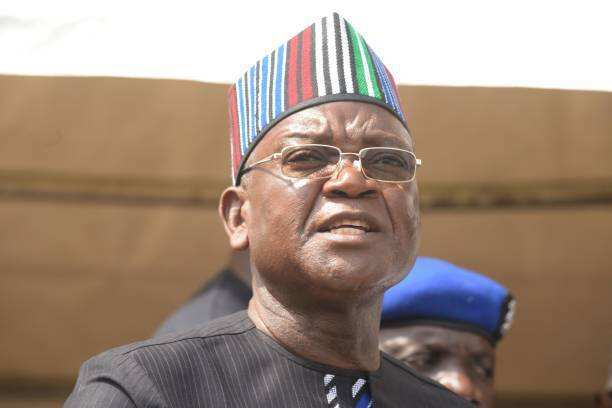 The governor called on the Senate and House of Representatives to reject the bill in the interest of the country.

He said the reintroduction of the National Water Resources Bill was suspicious having been rejected in 2018 by the 8th National Assembly.

Ortom insisted that the bill is another version of the Rural Grazing Area (RUGA) settlements which objective is to create grazing areas in the 36 states of the federation for herders and their livestock.

Meanwhile, Governor Samuel Ortom has reacted to the threat of the Miyetti Allah Kauta Hore to take legal action against him and Benue state over the group’s controversial attempt to establish a vigilante group in the state.

The group had said it would establish a vigilante group across the country as part of measures to curtail insecurity.

But Governor Ortom warned the association against establishing the vigilante group in Benue state, describing the move as another ploy to take its activities to another level.

In another report, the governor of Benue state, Samuel Ortom has maintained that no amount of threat, intimidation, or arm twisting will make him reverse the anti-open grazing law.

According to This Day, the governor on Monday, August 17, also raised the alarm that Miyeitti Allah groups are planning to impose violence on Benue state.

He called on security agencies to check the activities of the group and bring their members to justice for their crimes.