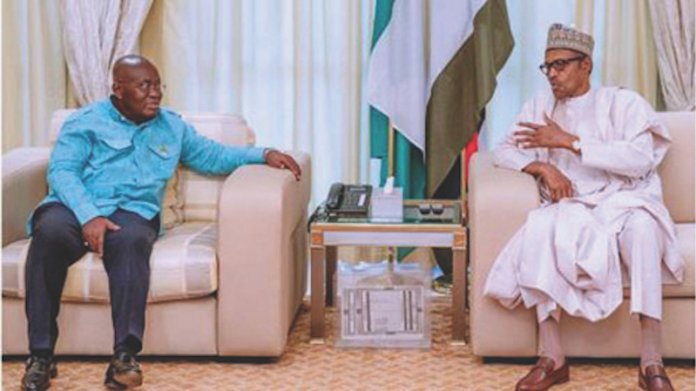 The attacks on Nigerian traders in Ghana, which followed similar ones in South Africa and the demolition of the nation’s embassy in June, in Accra, are indications that gone are the days when African countries ‘feared’ Nigeria. Shola Oyeyipo writes

On June 21 this year, the staff quarters of the Nigerian embassy in Accra, Ghana’s capital, was demolished by men who, armed, came with a bulldozer. They based their action on the fact that the embassy was sitting on parcel of land that belonged to one of them.
Channels Television had reported that the man earlier came with papers claiming that the land belonged to him. Though the Nigerian Embassy petitioned the Ghanaian government, it seemed nothing came out of the petition.

“The man showed up with evidence to support his claim and began to knock down the fence surrounding the building. The action of the man was not opposed. The Nigerian High Commission petitioned the Ghanaian government about it but there was no response. Days later, he returned to the premises of the staff quarters and this time with a bulldozer.”

Geoffrey Onyeama, the Nigerian Minister of External Affairs, condemned the demolition, saying it was the handiwork of criminals.
“We strongly condemn two outrageous criminal attacks in Accra, Ghana, on a residential building in our diplomatic premises by unknown persons in which a bulldozer was used to demolish the building,” Onyeama said.
He added that the Nigerian government was going to engage its Ghanaian counterpart and demand urgent action to find the perpetrators and provide adequate protection for Nigerians and their property in Ghana.

It could not be ascertained if the Nigerian government had reached out to the Ghanaian authorities and if the reaching out has had any effect. But if it has any effect, it must be on a negative side, because from all indications, Ghanaians, with the active connivance of their government, are really persecuting Nigerians in that country and targeting their businesses.

In fact, different laws and policies are being put in place to stifle Nigerians and their businesses in Ghana. These laws included placing very outrageous levies, specifically for Nigerians, and if unpaid, their businesses would be shut down.
In December last year, Nigerian traders, most of who were into retail businesses, were attacked in Accra, and a couple of major cities. In fact, the police that tried to dispel the rioters were pelted by the irate mob. Their grouse was that Nigerians had taken over their businesses and hence, they (Nigerians) must return to their country.

The House of Representatives, reacting to the attack, asked the Nigerians in Diaspora Commission and the Federal Ministry of Foreign Affairs to investigate the attacks. This move came after the Chairman of the House Committee on Diaspora Affairs, Tolulope Akande-Sadipe, sponsored a motion titled: ‘Recent Attacks on Nigerian Traders in Circle Market, Ghana’.
This was December last year. But by June this year, a businessman had the effrontery to attack a diplomatic building claiming the land was his. The question analysts were asking then, and still asking, was that how come the so-called businessman was able to get police cover to carry out the demolition?

Denis Ogbu, a businessman, who recently returned from South Africa, said there was no way the man, who demolished the building could have carried out such act without either passive or active support of the home government.

Speaking from experience, he said the practice was usually for the home government to feign ignorance or make some half spirited attempts to create the impression that it was against any aggression against foreigners or their businesses but at the end of the day, no arrest would be made or would anyone be tried for the attacks.

He claimed that it was the same thing they experienced in South Africa with local politicians actively supporting and encouraging attacks on foreigners and their businesses. He might not be farther from the truth. But the problem is far much deeper than that.
What the attacks on Nigerians and their businesses in South Africa and now Ghana have shown is that Nigeria is fast losing its diplomatic clout in Africa. From all indications, most African countries do not fear or respect Nigeria again.

A time was when Nigeria was home to millions of Ghanaians in the early 80s, when the country was facing severe economic crisis. They took up menial jobs but many of them actually took more dignifying jobs like teaching and were employed by many state governments especially, in the southern parts of the country.

Though via the ‘Ghana-Must-Go’ crisis of 1982, many of them were sent back to their country, this only affected those, who entered the country illegally.
Time it was when Nigeria’s voice commanded respect on the continent. During the apartheid era, Nigeria led the charge and was at the forefront of those taking on the Western powers goading on the racist government in Pretoria. Nigeria also led the struggle for the independence of countries like Namibia, Mozambique, Angola and South Africa itself.

In 2004, there was a coup plot in Sao Tome and Precipice. President Olusegun visited the country off archipelago of central Africa. He practically ordered the coup plotters to restore constitutional order, which they did.

Recently, there were massive protests in Bamako, the capital of Mali, against former President Boubacar Keita and President Muhammadu Buhari visited the country to mediate, but days later, President Keita was overthrown. Indication: if anyone took Buhari’s visit serious, perhaps, Buhari and his entourage.

That says something about why the Nigerian embassy residential house in Accra was demolished. And nothing happened. And for all it is worth, everyone should be worried about Nigeria’s vanishing diplomatic clout.