Britons have been told to dust off their coats for the first time since winter as temperatures are set to plummet below 10C in parts of the UK – 5C below the seasonal average.

A 500-mile wide ‘polar plunge’ has swept in for the August bank holiday making it feel colder, but also bringing drier weather and a reduced chance of rain.

Huge downpours and 80mph winds from Storm Francis battered the UK earlier this week, with cold northerly winds gripping the country over the next few days.

But party-goers were out in force on Friday as they celebrated the start of the long bank holiday weekend despite the wet and windy conditions. 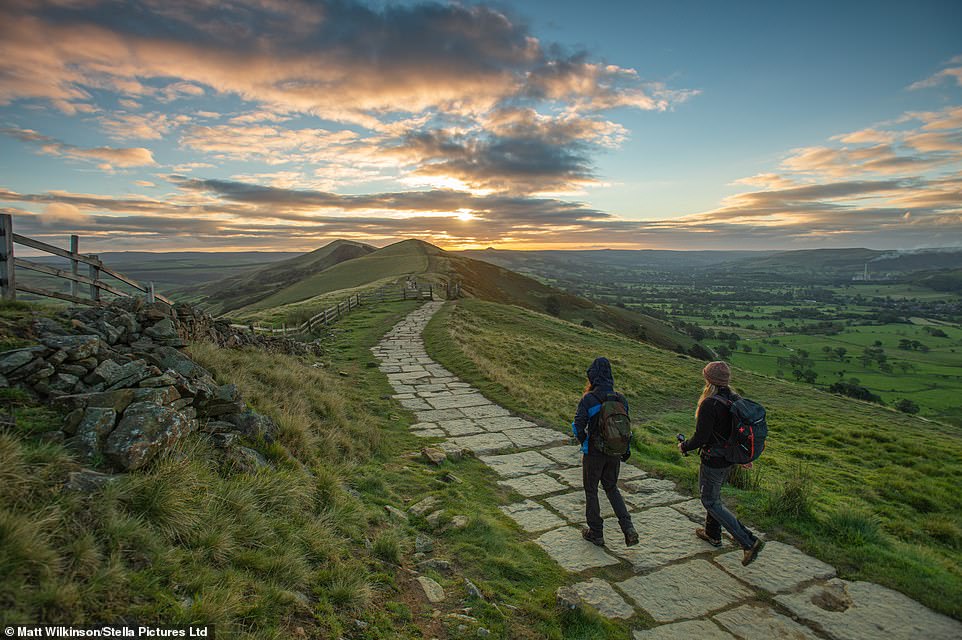 Temperatures are set to plunge as low as 10C in parts of the UK – as much as 5C below the average. Pictured are a pair walking through the early morning sunshine in Lose Hill, Peak District 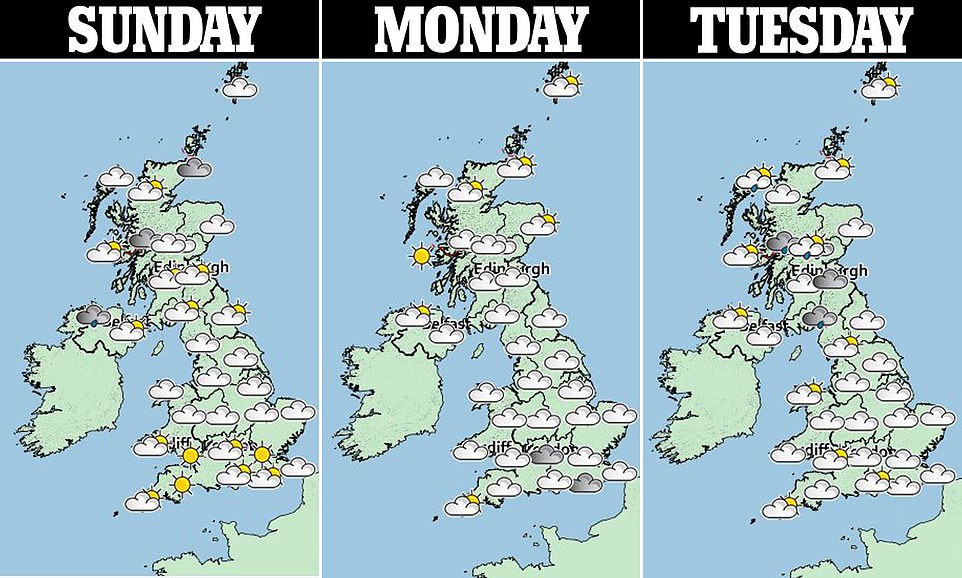 The Met Office said it will be a drier and sunnier today compared to yesterday, but it will also be noticeably colder in many areas – keeping less hardy beachgoers away from the coast.

‘The high pressure is in charge today,’ said meteorologist Gregory Dewhurst. ‘We had a lot of cloud across the east of the UK last night. That’s moved away now.

‘It’s going to be dry for pretty much everybody. There is a risk of one or two showers pretty much along the whole coast. But it will get a lot chillier in the evening.’

By midday temperatures are expected to climb to 20C (68F) across parts of the UK, but to remain as low as 13C (55F) in Balmoral, Scotland.

Tonight countryside temperatures will fall as low as 2C (35F) in the north, about 5C (41F) below average, while in northern cities they will linger at a chilly 6C (43F), about 2C (36F) below average.

Last night temperatures dropped as low as 0C (32F) in Catesbridge, Northern Ireland, with a scattering of light frost appearing on the ground.

‘There is a possibility of frost in the glens of Scotland,’ said Mr Dewhurst, ‘but it won’t be in towns and cities. There is still some warmth left over in them’.

‘Stray’ showers are also expected along the East Anglia and Kent coastlines tonight, with further showers expected for some coastal towns today. 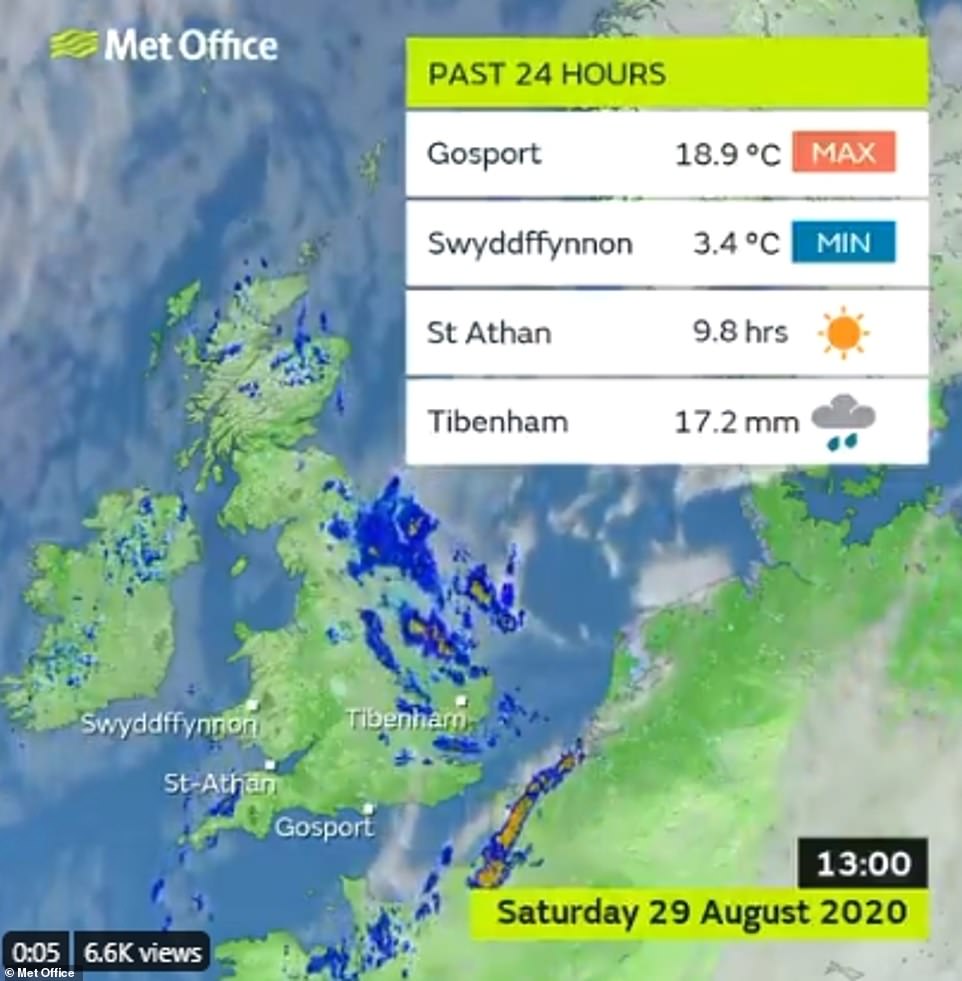 The lowest temperature recorded yesterday was 3.4C (48F) in Swyddffynnon, Wales, as the polar front swept in 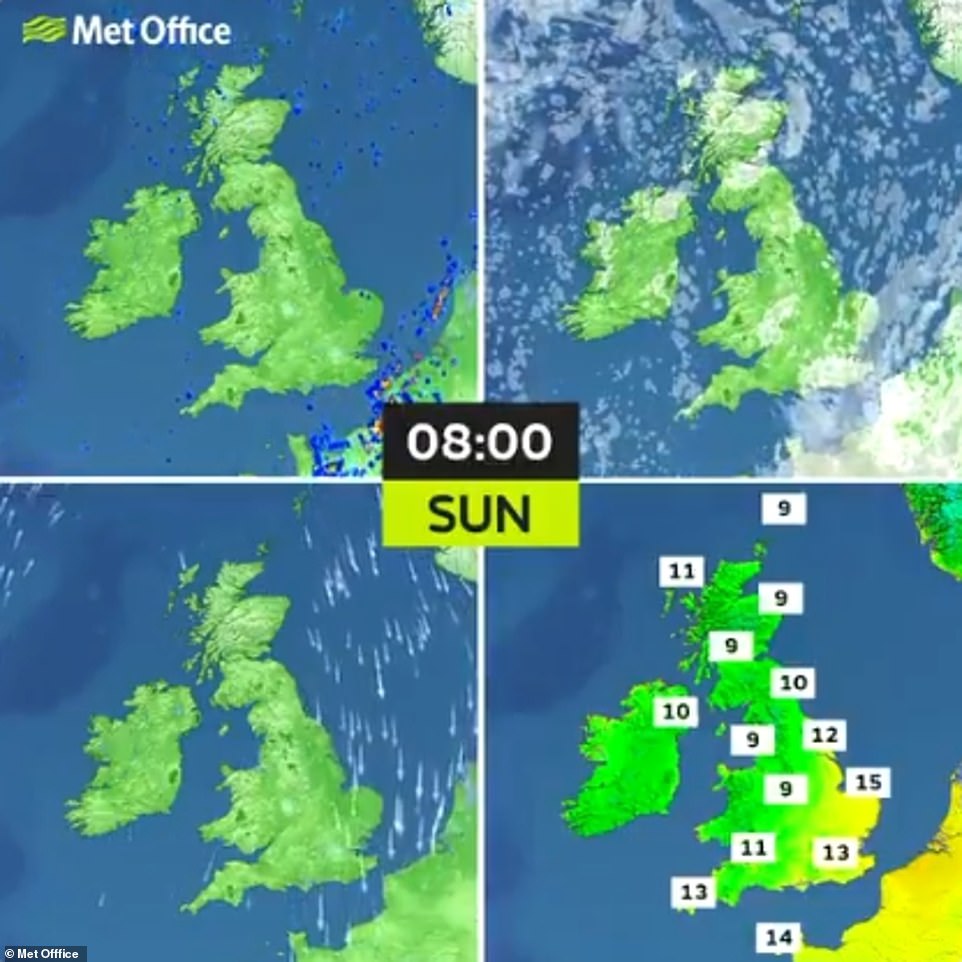 ‘A fine though rather cool day for many on Sunday’, said the Met Office in the caption for this photo 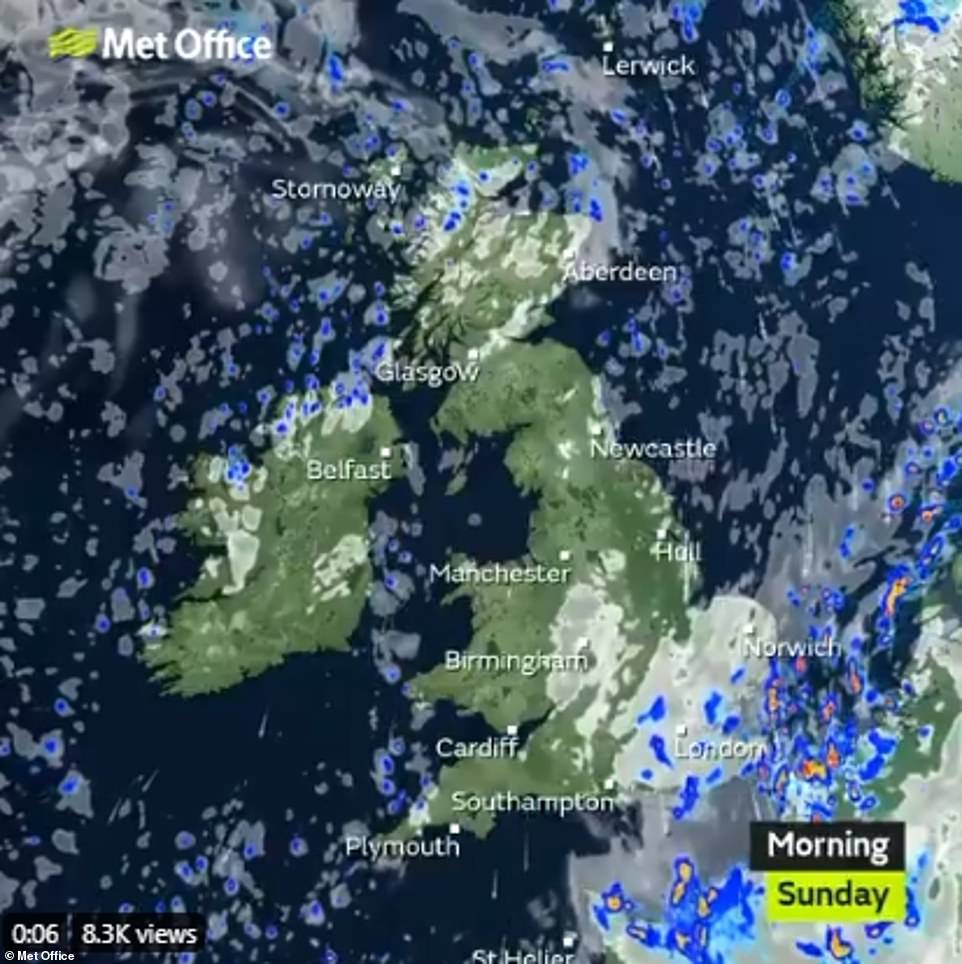 The Met Office said it is expected to be a dry day due to the polar front and sunnier, but it will also be colder

Some of the weekend’s coldest daytime temperatures are likely to be in the north Pennines, where some areas might only reach a chilly 10C (50F) today.

Meanwhile, Scarborough, North Yorks, is likely to hit a maximum of 13C (55F) this afternoon, which will feel like 8-9C (46-48F) due to strong northerly winds reaching 28mph.

The Meteorological Office said high pressure is due to build through the weekend bringing ‘plenty of sunshine’ and lessening winds.

Frank Saunders, chief meteorologist at the Met Office, said: ‘We’ve seen a real mix of weather this August – with a heatwave earlier this month and in the last week we’ve had two named storms bringing very wet and windy weather across the country.

‘With high pressure on the way this weekend we’re going to end the month with much more settled weather, with plenty of late summer sunshine for many. It’ll be a dry weekend for most areas too.’

The mixed forecast for the weekend follows heavy rain and thunder as 5.6 million motorists were expected to take to the roads for the bank holiday getaway.

There was flash flooding in Devon, Cornwall and Hampshire on Friday morning as more than half a month’s rain fell in 12 hours. 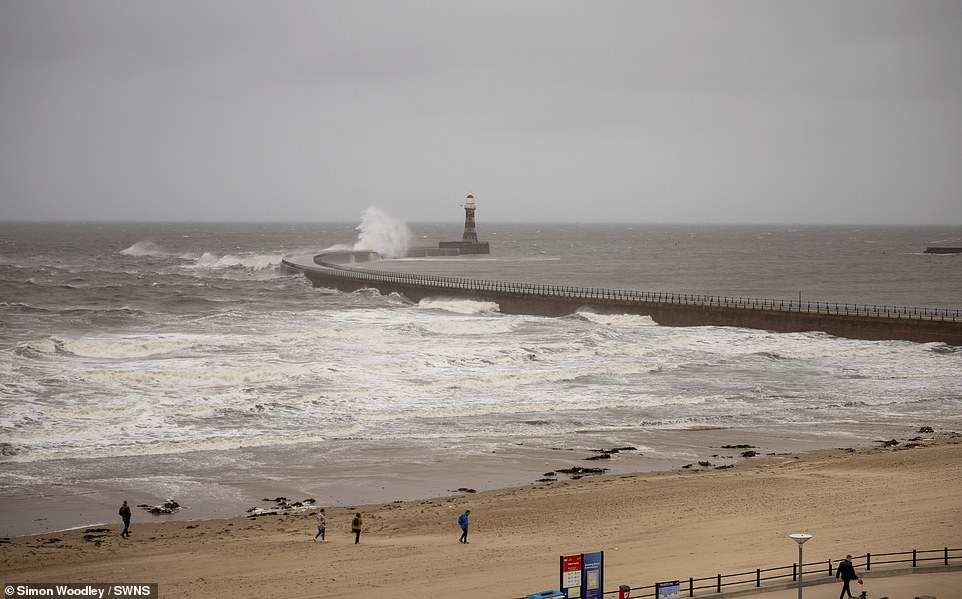 Waves slam against the pier at Roker Lighthouse in Sunderland, yesterday afternoon, as clouds roll in from the North Sea 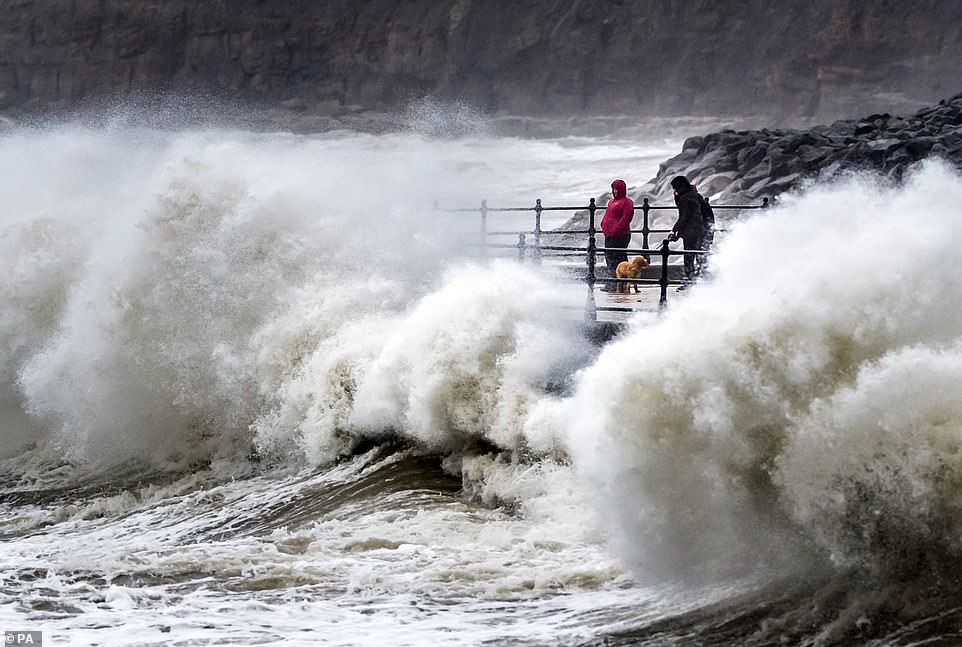 Waves were seen crashing against the seafront at Scarborough, North Yorkshire, earlier yesterday, as Britain faces a Bank Holiday washout 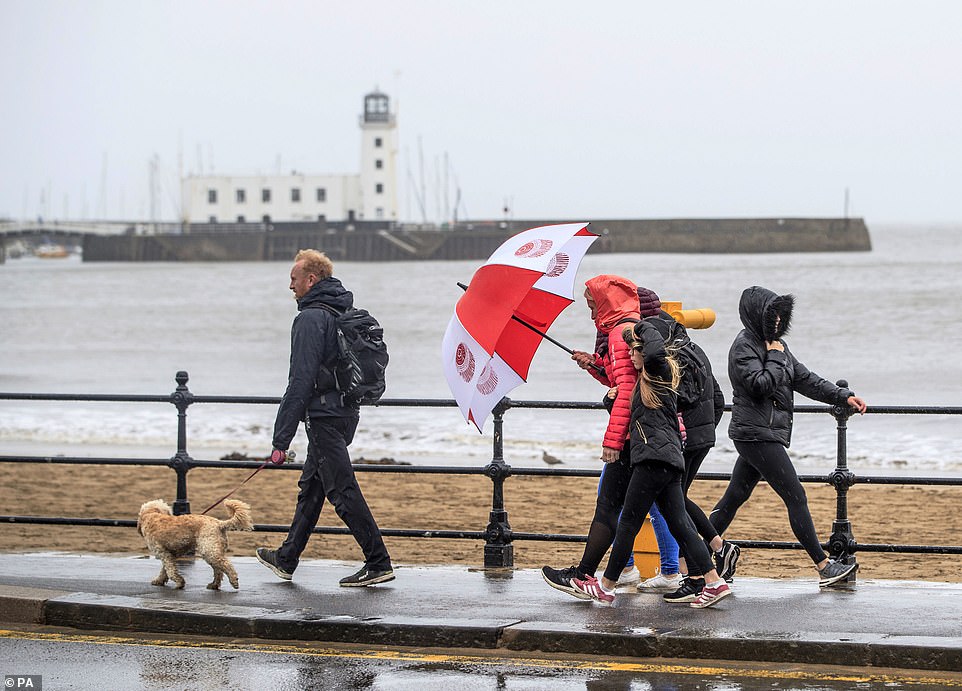 Despite the grey and blustery weather, people were still seen walking along the windy seafront at Scarborough, North Yorkshire, yesterday

The wettest place on Thursday was Lanreath, Cornwall, where 51mm (two inches) fell over 24 hours to 7pm, the Met Office said. Cornwall’s average rainfall for the whole of August is 81mm (3.2ins).

Through yesterday, half an inch of rain fell in Herefordshire and Worcestershire, while Loftus, North Yorkshire, had 27.6mm (1.1ins) in 12 hours to 1pm, against a monthly average of 59.4mm (2.3ins) for August.

The heavy rain follows flooding and damage caused by named storms Ellen and Francis over the last 10 days.

The Met Office is warning that later in the coming week, parts of Britain could be hit by the remnants of Hurricane Laura, which has brought devastation to the US states of Louisiana and Arkansas, leaving six people dead.

The hurricane is one of the strongest ever to hit America with winds reaching 150 mph.

The Met Office said Laura is due to become part of an Atlantic low pressure system which will ‘track eastwards towards Europe’.

It could bring ‘a spell of wet and windy weather’ to Northern Ireland and parts of Scotland on Wednesday and Thursday – but forecasters say it is too early to predict whether it will have any impact on England and Wales.