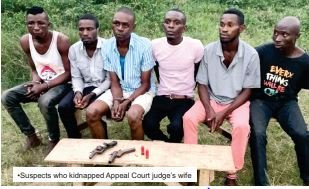 Suspected criminals arrested for allegedly abducting the wife of an Appeal Court judge and killing her aide in Cross River state on July 4, have blamed the ban on Okada operation and the Coronavirus lockdown for joining the kidnapping gang.

Ekwele Agube, the wife of a judge at the Court of Appeal, was kidnapped by six armed men who accosted her along Ministry Road, off NPA Junction in Calabar, Cross Rivers State. They killed her aide identified as Glory Egbela before whisking her away to an unknown destination in their operation vehicle. She was released 14 days later, after her family paid N6.8 million as a ransom for her release.

Immediately after her abduction, operatives of the Force Intelligence Response Team (IRT) led by Deputy Commissioner of Police, Abba Kyari, were detailed to investigate and track down the kidnappers.

The IRT made a breakthrough when it trailed one of the phone numbers used in negotiating the ransom to one of the gang leaders identified as Nsense Bassy a.k.a. Lion, When he was arrested, Bassey confessed to the crime and led the police operatives in arresting five other members, including the gang’s informant, cooks, and boat boy.

In an interview with The Nation, Bassey confessed that he led other members of the gang to kidnap two other persons, including a Cameroonian diplomat and an Igbo businessman. He said the victims, who spent one week each at their den, were released after a ransom of N2 million was paid for each of them.

The 30-year-old father of four and indigene of Akam Local Government Area, Cross Rivers State, said he took to kidnapping because he had no means of feeding his children during the lockdown which followed the outbreak of the Covid-19 pandemic.

“I am a primary school dropout. My father has no job, my mother left me and I was left on the streets of Calabar to fend for myself. I couldn’t learn a trade; I was just roaming the streets. But five years ago, I met my wife and we became friends. I impregnated her and she ended up having four children for me.

I was doing menial jobs to sustain my family, but when the Covid-19 pandemic started and there was a lockdown, I had no job and my family was hungry. One of my friends known as Christian was the one who introduced me to kidnapping. I joined because there was no way I could get money to feed my children.

Our first operation was at White Market area of Calabar, where we kidnapped an Igbo man selling auto spare parts. We were six that went for the operation and we had six pistols with us. We kidnapped the man on the road. We took him to the waterside and I left him at that point and went home. My other gang members were the ones who took the man into our camp, and it was Christian who introduced me to the gang that negotiated for the ransom.

Two million naira was eventually paid as ransom and I got N300,000 as my own share. I also bought cloths and food items for my children, and I gave a part of it to my brother who has no job. I also gave N50,000 to my wife to start a small business.

One month later, we kidnapped a Cameroonian who we found on the street trying to buy something. When we kidnapped him, Christian took the man’s car away and sold it. Later, we took the man into the creeks across the river but I didn’t go with them because I don’t know how to swim.

Christian was also the person who negotiated for the ransom and the man spent one week in our camp. Two million naira was eventually paid as ransom and I got N270,000 as my share. I bought my pistol from one Chris who sells locally made guns at Ikang area of the state and I used it for the third operation, which was brought by one Luis who is a friend to Christian.

They told me that the woman we were going to kidnap was very rich, and if we succeeded in kidnapping her, her husband or relatives would pay a huge sum as ransom. Luis was the one who monitored the woman’s movement. When we eventually kidnapped the woman, we had an exchange of gunfire with some policemen on patrol. I did not know that somebody died in the process.

It was when we were arrested that I heard that someone died.  It was Christian that did the negotiation for ransom, and he took N4.8 million first from the victim’s family and absconded with the money.

The boys who were looking after the woman in the creeks refused to release her. They insisted that they must get their share of the ransom before they would release the woman. I went after Christian and he refused to see me. Then he dropped the woman’s phone at a place and directed me to where I found it.

I then called the victim’s family, requested for another N2 million and they gave it to me. I called the boys at the camp then they released the woman for me.  I got N350,000 as my share and gave the informant N100,000. A few weeks later, I got a call from pastor, who asked me to come to the church. When I got there, I was surrounded by the police and I was arrested.”Bassey said

On his part, the gang’s alleged informant and motorcycle operator, Luis Otubassy (25), who is also married with a child, said he took to kidnapping after the government enforced the ban on commercial motorcycle in Cross Rivers State.

“I am a motorcycle operator and I joined the kidnapping gang when the government banned motorcycle operation in Calabar. Nsense, who we call Lion, linked me to the gang and I was using motorcycle to carry the gang members around town to look for whom to kidnap.

On the kidnapping of the Appeal Court judge’s wife, I didn’t know that her husband was a judge. I thought she was a contractor.

I was the one who pressurised other members of the gang to kidnap the woman and her aide was killed in the process.

Another suspect, Edet Ene (28), a native of Apkabiyo area of Cross Rivers State, said he was the gang’s boat operator and was responsible for ferrying the victims to the gang’s hideout. He pleaded with the police to forgive him and promised never to do it again.

“I am the person paddling the boat into the creeks, and we used to spend 30 minutes on water before we would get to the camp. I am also the person that used to buy food for the victims. I am an orphan and I have no one to help me. That was why I joined the gang.

On the first day, they called me and I ferried their victim into the creeks and stayed with them.  I was paid N180,000 when ransom was paid for the release of the victim and I used the money to rent a house for myself.

My mother died while I was five years old and I do not know my father. I have been struggling alone all this while. I fell for them because I was hopeless. I also got N100,000 from the second operation and I bought a N70,000 mattress from the money.

I need the police to forgive me. I will never go into crime again.” Edet said