By Faith Ridler For Mailonline

A ‘reckless’ jet ski lout has been blasted by police for racing within inches of a pod of dolphins which he tormented for 45 minutes off the Devon coast.

The man came within a few inches of the aquatic mammals in Berry Head before zooming off, with photographs shared by police showing the animals close to his vessel.

Paignton Police posted the image to Facebook as the force reminded Britons that ‘actions such as this one are unacceptable.’

‘In the recent weeks we have been fortunate enough to have the company of dolphins at Berry Head,’ a statement said. 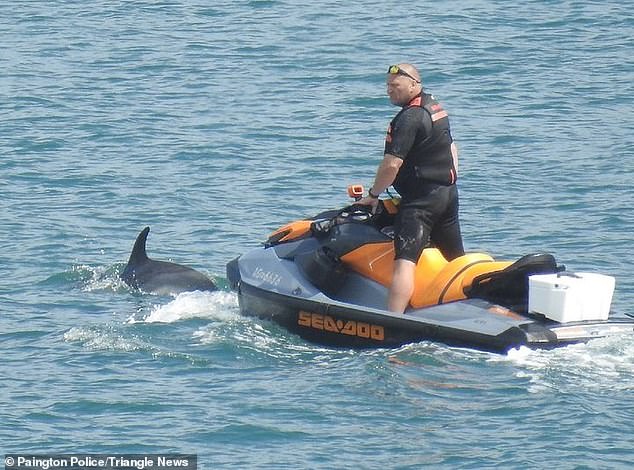 The man came just a few inches from the aquatic mammals in Berry Head, Devon before zooming off, with photographs shared by police showing the animal close to his vessel

‘We would like to remind everyone that actions such as the one in this picture are unacceptable.

‘Intentionally or recklessly disturbing any wild animal, including dolphins, is an offence under the Wildlife and Countryside Act 1981.

‘We will not tolerate this behaviour, the unknown male pictured harassed these dolphins for over 45 minutes before heading off.

‘This type of behaviour is not acceptable and we ask that you please respect our wildlife.’ 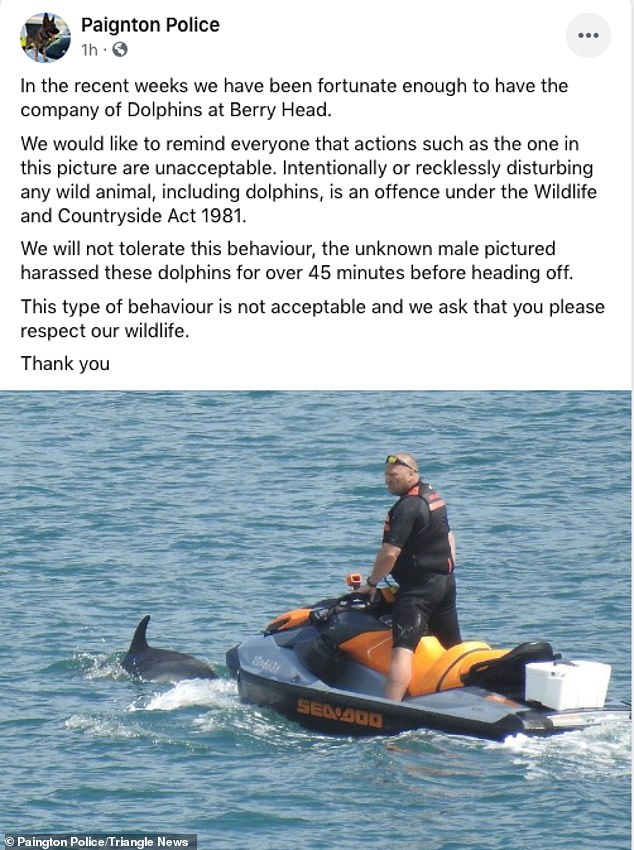 The animal, believed to be a Common Dolphin, is often seen in Berry Head with dozens of eager nature watchers reporting spotting the creatures in the past few months.

The Berry Head reserve hosted a two-hour event in July for National Whale & Dolphin Watch Week to record the number of aquatic mammals seen in the waters.

How does the Wildlife and Countryside Act protect dolphins?

Under the Wildlife and Countryside Act 1981, it is illegal to ‘intentionally or recklessly disturb any dolphin or whale’ in British waters.

It is also against the law to ‘sell, offer or expose for sale any cetacean.’

Dolphins are also protected by the Conservation of Habitats and Species Regulations 2017.

This prohibits people from killing, injuring, capturing or destroying the place of resting of dolphins within 12 nautical miles of the UK.

According to the Wildlife Trust, the creature is seen all around the UK but most commonly near the South and West coasts and offshore.

The Trust urges people to ‘maintain a distance of at least 100m’ from the animals if they meet them at sea, ‘especially if calves are present.’

‘If the dolphins approach you, maintain a constant speed and allow them to interact on their own terms and leave at will,’ it added.

Under the Wildlife and Countryside Act 1981 it is illegal to ‘intentionally or recklessly disturb any dolphin or whale’ in British waters.

It is also against the law to ‘sell, offer or expose for sale any cetacean.’

Common Dolphins – or short-beaked dolphins – live in the Pacific and Atlantic Oceans, alongside the Mediterranean, Red and Black seas.

They prefer temperate waters and can be spotted close to coastlines and far out in open ocean.

In 2018, the Natural History Museum reported there had been a significant jump in the number of the aquatic mammals seen around the Scottish Hebrides.

Experts at the time believed the creatures were responding to warmer waters in the area.

Becky Dudley, Marine Biodiversity Officer at Hebridean Whale and Dolphin Trust, said: ‘We have a consistent dataset gathered over 15 years that allows us to look at trends.

‘Common dolphins were rare in 2003, but since then we have had a twenty-fold increase in sightings. Now, common dolphins are the most common species of dolphin that we see.’