– The singer gifted the actress a speaker and a photo frame

A few weeks after leaving her rented apartment for her new mansion, Nollywood actress Iyabo Ojo was paid a surprise visit by singer Korede Bello.

The actress took to her official Instagram page to share the news with her fans and followers.

The Yoruba film star and her family were having a photoshoot in her new home when a surprise package came in from the singer.

In the video shared on her page, a lady entered the actress’ sitting with a box containing a speaker and a wrapped item. She knelt down to greet the mom of two and then told her where the gift came from. 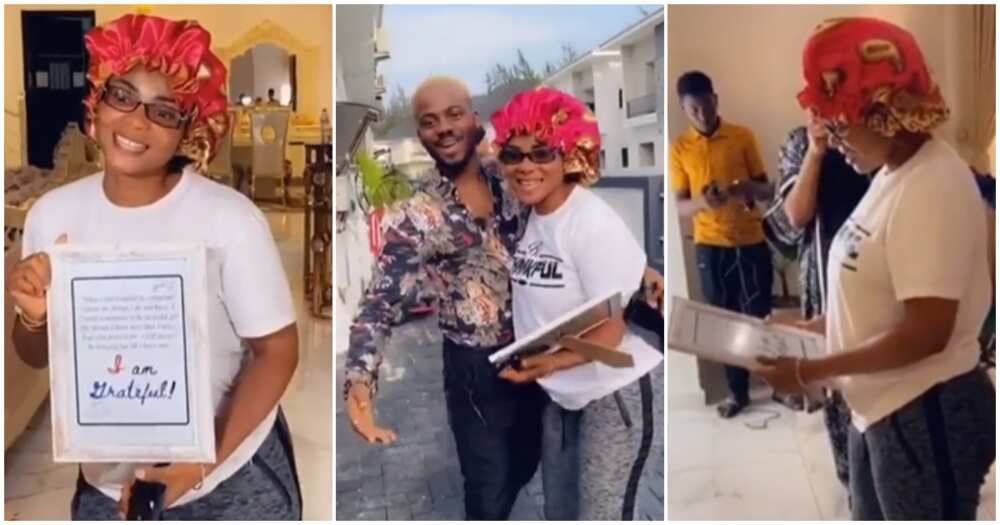 The wrapped item contained a photo frame with some words dedicated to the actress. Expressing her gratitude, she prayed for the singer. According to her, he would grow from height to height and grace to grace.

The singer was later seen in the video. Excited, Iyabo hugged him while thanking him for his kind gestures.

In the caption that accompanied the video on her page, Iyabo said that she was excited to see the God Win crooner. She described his gift to her as her best surprise ever.

“…all my gifts that came along with you, I’m grateful, humbled & happy, God will surprise you this year, you are blessed & highly favoured. Love you a million much,” she said.

Meanwhile, as soon as the actress shared the video, comments started to roll in from her followers. Many said that the singer was performing his duty as her in-law.

In other news, Legit.ng earlier reported that Iyabo Ojo showed off the pantry of her new home online.

The actress shared a video of the pantry which looked like a mini-mart as it contained almost everything one could find in a supermarket.

From foodstuff to toiletries, provisions and many other things, the actress neatly set up her pantry to accommodate all she wants.

Nigeria Celebrities: How Much Do They Spend On Luxury Life? | Legit TV