Africa’s most expensive player Victor Osimhen made a statement for himself since he made his mega-money (around £74million) deal move to Napoli this summer.

The 21-year-old grabbed his first hat-trick for the Partenopei in just eight minutes of their preseason encounter with L’Aquila.

His goals came in the first, third and eighth minutes of their test game and manager Gennaro Gattuso wants the fans to be patient with the youngster.

The Super Eagles forward stepped out for the first time in a Napoli shirt in two 45-minute matches, and left the fans chanting his name after his superb performance in the gane.

Apart from finding the back of the net three times, Osimhen also assisted another goal, but Gattuso has urged the fans not th mount too much pressure on the youngster. 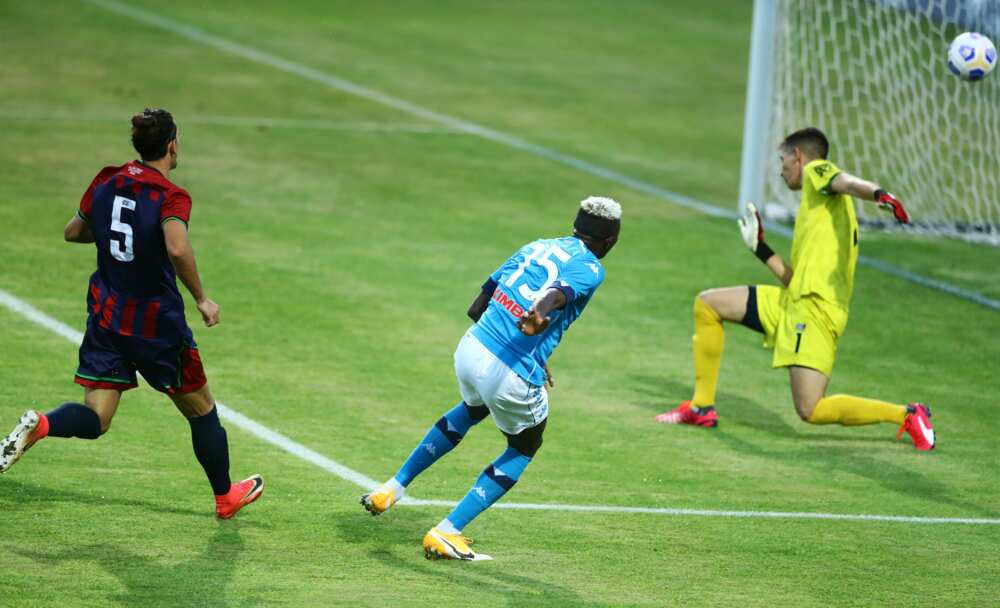 Victor Osimhen scoring one of his goals for Napoli during their test game – Getty Images
Source: Getty Images

“It’s too easy to get excited now, we’ve got to give him time and let him work, not put pressure on,’ he told Sky Sport Italia via Football Italia.

“He is an important player and we paid a lot for him, but there were no doubts he would give us something different that we haven’t had in my time here. There’s a long way to go.

“It’s not like we suddenly signed Pele or Maradona, we simply brought in a player with certain characteristics that can help us.”

While appraising his team’s performances so far this preseason, the 42-year-old feels delighted with what they have been able to do ahead of the 2020-21 campaign.

“I am satisfied with the work we’re doing, the team is motivated and knows what it wants.

“We are all aware that we have to improve in so many respects. We’ve got to do better when off the ball, be able to cover every inch of the field and find the right balance.

“More importantly, stamina, because I still can’t believe we basically scored three goals against ourselves against Barcelona in the Champions League. We’ve got to stay totally focused for 90 minutes.

“We must be aware that what we did last season wasn’t enough to qualify for the Champions League, so we must all do more and believe strongly in what we are doing.’

Legit.ng earlier reported that Victor Osimhen grabbed his first hat-trick in the colours of Napoli in their 11-0 victory over L’Aquila in a friendly encounter.

The 21-year-old striker became Africa’s most expensive player after joining the Italian League giants from Lille in a deal valued around €70 million.

And the Super Eagles star hit the ground running with three superb goals in just eight minutes, added with two other assists in the test game.