– Many Nigerians said that Ifeanyi looks all grown-up

Singer Davido’s fiancee Chioma seemed to have returned from taking a break online as she was recently spotted sharing some photos on her official Instagram page.

Although the chef had some ambassadorial duties to fulfill, which makes her share photos, she recently posted a personal photo of herself with her son Ifeanyi.

The mother of one was spotted in a plane looking as gorgeous as usual. She was donned in a long mixed-coloured dress. She wore a long weave and a sunshade on. 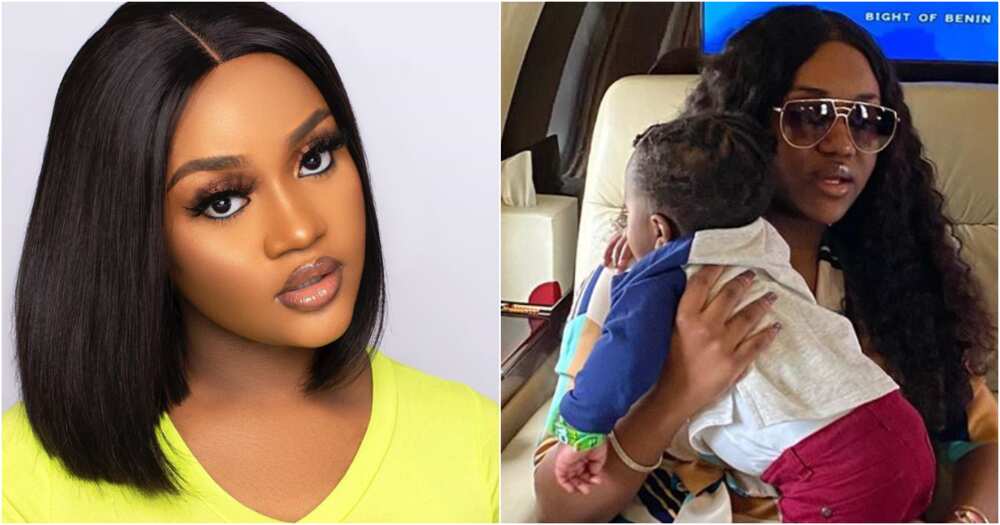 The most beautiful part of the photo was her son Ifeanyi. The singer’s fiancee carried her baby in her arms. He was putting on a white and blue top and a wine-coloured trouser.

One could spot his big stomach bulging from his top as he looked out of the plane’s window. According to his mum, Ifeanyi is well-fed, noting that as the reason why his stomach bulged out from his top.

See the beautiful photo of the mum and son below:

As expected, Nigerians reacted to the photo of the singer’s fiancee. Many had beautiful things to say about it especially about her son. Some people had to express their love for the photo with emojis

omoslin: “He so big now. may Jehovah bless and protect you guys, Amen.”

_6thofdecember: “He has grown so much.”

olakadara: “Bless God, he is so grown. He shall fulfill destiny and be a channel of blessings to his generation in Jesus name.”

In other news, Legit.ng earlier reported that Tiwa’s Jamil and Davido’s Imade stormed the beach together after an argument.

In the series of videos, Imade and Jamil were spotted putting on lifesaver jacket like their parents. They seemed happy to be on the boat conveying them to the beach as they chanted happily.

A voice like Sophia Momodu was heard asking the children if they are happy about being on the beach and they chanted a big yes.

Davido has not called me back, Jude Okoye lied about so many things – Cynthia Morgan | Legit TV