– Bishop Simeon Okah, the vice president of PFN, said the church would not sit back and watch anyone violate its rights

The controversy generated by the signing into law of the Companies and Allied Matters Act (CAMA), is gathering momentum on a daily basis, especially among the Christians.

The Nation reports that the Pentecostal Fellowship of Nigeria (PFN) south-south, has called on President Muhammadu Buhari to revoke the contentious section for peace to reign in the nation.

Legit.ng gathered that the vice president, Bishop Simeon Okah, made the call during a briefing with newsmen in Warri, where he said that the rancour that greeted the signing of the law should cause a “rethink” on the part of the federal government.

Okah, who is the founder of Flock of Christ Mission, stated that those who “smuggled” in the controversial section 839 (1) & (2) are enemies of Nigeria, adding that the church would not sit back and watch anyone violate its rights. 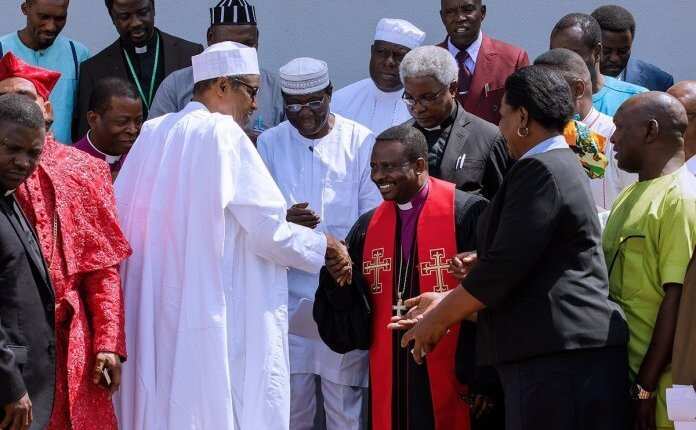 The leadership of the Christian Association of Nigeria (CAN) visited President Buhari in Aso Villa. Credit: Facebook/Femi Adesina.
Source: UGC

He also explained that as a travelled preacher, the regulations in place in Western nations like the United States of America (USA) and Britain are basically to protect government’s investment in the churches, since as non-governmental organisations, they receive grants from the government, hence pastors have to account for the funds.

“But in Nigeria, the government has no investment whatsoever in churches and so has no moral right to regulate what it has no inputs in,” the Bishop stated.

He noted that the church has kept the law by paying taxes and subjecting to all regulations, its businesses such as schools and hospitals which are profit-oriented.

Bishop Okah further emphasised that it is not in the place of government to attempt to remove trustees and foist leadership on a religious organisation, as that would amount to a denial of religious freedom which is against the spirit of the Nigerian constitution.

In his interview with Legit TV, the clergyman said that nobody can appoint anybody over the church he invested his blood, sweat, and money on.

He said that a prophecy had earlier gone out in the year that said that the government would want to test the church as he added that the new CAMA is a joke and dead on arrival.