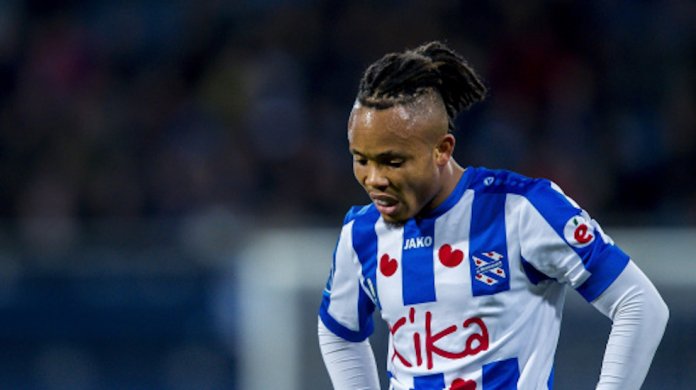 With 10 goals and six assists in 29 matches and emerging as one of the top dribblers in the Dutch top-flight in just his first season, it came as no surprise that several top European clubs are on the trail of SC Heerenveen winger, Chidera Ejuke. Inspite of the Nigerian promising to continue improving on his game with Heerenveen he could not resist Russian giants CSKA Moscow when they came calling

Chidera Ejuke flew out to Russia on Wednesday to complete a 12 million Euros transfer to CSKA Moscow and will also do the routine medical and agree personal terms with the Russian club after Heerenveen and CSKA agreed on a transfer fee of 12 million Euros.

Ejuke will be joining the 13-time Soviet Top League / Russian Premier League champions on a four-year deal that will keep him at the Muscovites until the end of the 2023-2024 season, subject to a traditional medical.
The exciting winger boarded his flight to Moscow at approximately 1630 hours on Thursday afternoon and will be arriving in the Russian capital at 2255 hours.

His transfer to CSKA Moscow brings an end to speculation surrounding his future, with teams in France, Netherlands, Turkey and United Arab Emirates battling for his services following a banner season that saw him score 10 goals and set up six others in 29 games across all competitions.

Ejuke’s medical with CSKA Moscow was scheduled for yesterday ahead of his unveiling as a new player of the club.

They are expected to use the profit from this latest transfer to strengthen their team after several top stars were sold in the off-season.

In just his first season in the Netherlands, Ejuke emerged Heerenveen’s best player, following several incredible displays which saw him smash the back of the net 10 times while making another four assists in the 25 games he played.
But more than the goals, though, were the youngster’s dribbles.

Of the players who played 10 league matches or more, Ejuke attempted and completed the most dribbles in the Eredivisie last term, cementing his rating as the best dribbler in the Netherlands.

Turkish giants Galatasaray and Dutch champions Ajax had earlier been linked with an interest in the Nigerian winger, but he wants to focus on becoming a more productive player.

“I scored 10 goals last season, and I intend to score more next season,” Ejuke told an online publication.

“My desire is to improve further for the good of my team. Maybe getting into goal-scoring position more will mean dribbling less.

“I want to dribble less and score more. It’s what I intend to do next season. As a player, constant improvement can’t be overruled.”

Ejuke joined Heerenveen from Valerenga last summer for €2 million and has a contract tying him to the Dutch side until 2023.

In spite of his recent rise, Ejuke still rued not able to impress when he went on trials at Liverpool four years ago.

The former Nigeria U-20 starlet spoke of his frustration after failing to seize an opportunity to play for the Anfield outfit.

The forward revealed he was scouted at the age of 18 and went on to have a trial with the Reds but failed to impress at Anfield and had to return to Nigeria disappointed.

The 22-year-old, who shone for Heerenveen during the 2019-20 campaign, revealed the incident has always inspired him to perform better.

When I was just 18-years-old and still living in Nigeria, there was a scouting programme on the other side of the country,” Ejuke told Voetbal.

“I was picked out together with three peers by a scout from England. We were allowed to have a trial at Liverpool. It was the first time that I left my country and then also for an internship in my dream competition.

“We were warmly welcomed at Liverpool. We did an internship there for a few weeks, it went pretty well, but I probably wasn’t good enough.

“Liverpool was not interested and so we had to return to Nigeria. That was just as tough. This was the opportunity I had been dreaming about all these years and if it doesn’t work out, it’s bitter. It felt like I had let down my agent and my family.

“If I had taken that chance, it would have been a different story, but it was a good experience. That missed opportunity became a source of motivation for me and it helped me grow as a player. I had tasted Europe and now I wanted more.”

The forward left Nigeria in 2017 after playing for Gombe United in the NPFFL to start his European career in Norway with Valerenga.

Ejuke made a key impact during his two-year stay with the Intility Arena outfit which saw a number of European clubs jostle for his signature.

The winger, however, signed for Dutch club Heerenveen in the summer of 2019 after snubbing interests from Besiktas, Lazio and Roma.

The forward has represented Nigeria at the U-17 and U-20 levels.