– In his speech accepting the nomination, Trump hit on several policy areas that were a big feature of his 2016 campaign

In his speech formally accepting the Republican presidential nomination, Trump criticised his main rival in the election, Joe Biden.

“Joe Biden is not a saviour of America’s soul,” he told a large crowd of the Republican Party’s supporters who witnessed the historic event. 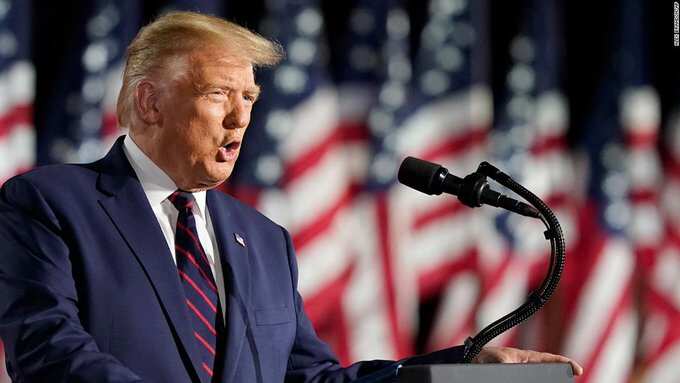 He accused Biden of betraying working-class Americans by “outsourcing the dreams of American workers” throughout his nearly five decades in public life, while also taking a personal swipe at criticism Biden has faced for being overly touchy.

President Trump referred to Biden’s votes as a senator for NAFTA and to allow China into the World Trade Organization as “a shameful roll call of the most catastrophic betrayals and blunders in our lifetime,” mocking the emphasis Biden has placed on empathy as hollow in the face of those votes.

ABC News reports that at the conclusion of Trump’s acceptance speech, a fireworks display launched at the Washington Monument.

Trump’s speech comes 10 days after Biden was officially nominated on Tuesday night, August 18, as the Democratic nominee for president.

The former vice president tweeted his acceptance after he was adopted as the party’s candidate in a virtual convention.

The historic moment played out with Biden and his wife, former Second Lady Jill Biden, celebrating remotely with family members as the entire convention was virtual due to COVID-19 regulations.

Legit.ng had earlier reported that the Biden named California senator Kamala Harris as his vice-presidential running mate ahead of the U.S presidential elections.

Experts say Biden’s historic choice will likely bolster his chances of beating Donald Trump in an election many predict will be a close race.

Harris, a barrier-breaking former prosecutor, is the daughter of immigrants from Jamaica and India, and is the first black woman and the first Asian American to run on a major party ticket.