– Silva will be joining the likes of Hakim Ziyech, Timo Werner, Ben Chiwell and Malang Sarr at Stamford Bridge

The Brazilian center-back spent eight seasons with the Parisians winning seven Ligue 1 titles in the process.

The 35-year-old was unveiled by the west London club after signing a one year deal having the option of a further year. 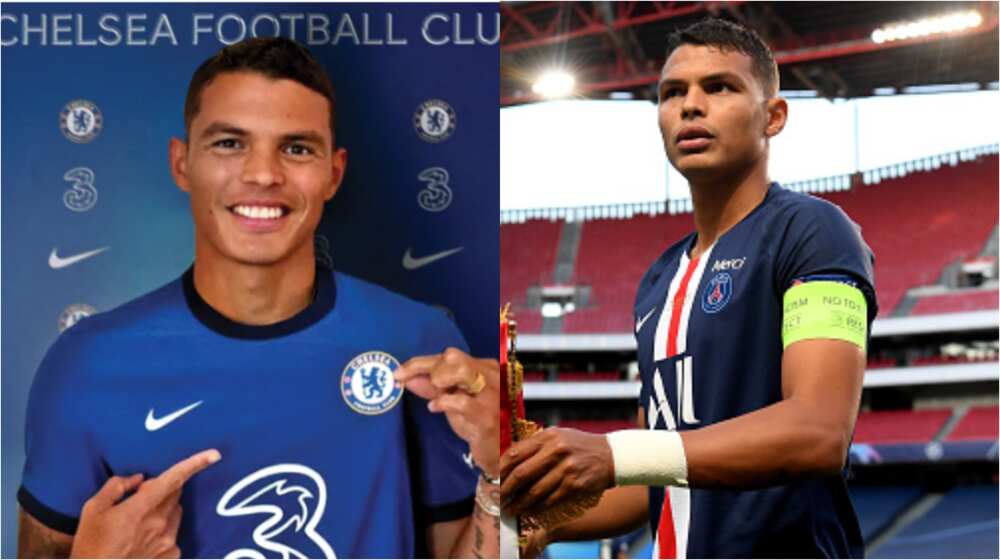 Silva to Chelsea’s website: “I am so happy to be joining Chelsea. I am delighted to be a part of Frank Lampard’s exciting squad for next season and I’m here to challenge for honours. See you soon Chelsea fans, I look forward to playing at Stamford Bridge very soon.”

The Brazilian international featured for PSG in the Champions League final where they lost to eventual champions Bayern Munich by 1-0.

And he was bought to solve Lampard’s defensive problems that saw the Blues concede 54 goals last campaign.

Meanwhile, Legit.ng also reported that Thiago Silva could be wearing the prestigious captain’s arm-band for Chelsea if he completes his move to Stamford Bridge according to reports.

The Brazilian international played his last game for Paris Saint-Germain when they lost by 1-0 in the Champions League final to Bayern Munich in Lisbon.

Legit.ng also reported that Thiago Silva is edging closer to a move to Chelsea after making his last appearance for Paris Saint-Germain in the Champions League final.

The 35-year-old’s current deal with PSG ended this summer and he is now a free agent after spending eight years with the Parisians.

And the Brazilian central defender will become Frank Lampard’s third signing after Hakim Ziyech and Timo Werner if things go according to plans.