Nigerian star Victor Osimhen grabbed his first hat-trick in the colours of Napoli in their 11-0 victory over L’Aquila in a friendly encounter.

The 21-year-old striker became Africa’s most expensive player after joining the Italian League giants from Lille in a deal valued around €70 million.

And the Supr Eagles star hit the ground running with three superb goals in just eight minutes, added with two other assists in the test game.

Lorenzo Insigne also found the back of the net in the encounter while Dries Mertens and Chucky Lozano gave account of themselves with two goals each in the game.

The victory handed Gennaro Gattuso’s side a bright start in their preseason tour as they take part in a mini tournament against local teams Castel di Sangro and L’Aquila. 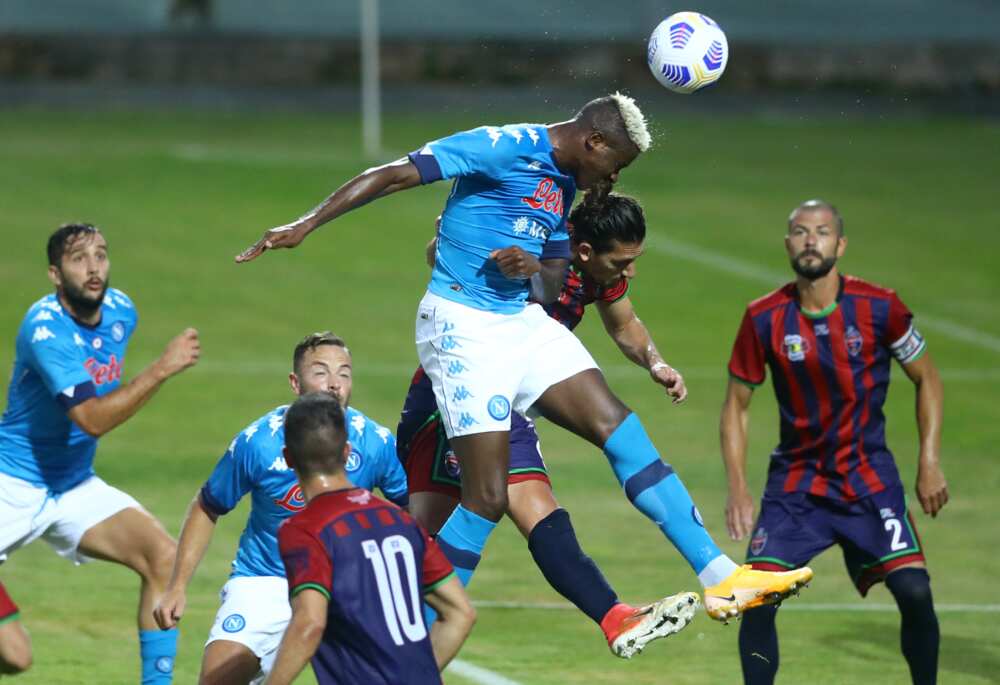 Football Italia reports that the Partenopei already recorded a 10-win over Castel di Sangro with Matteo Politano scoring a hat-trick, and Arkadiusz Milik and Amin Younes grabbed two each.

The Italian born manager twitched his starting line up for L’Aquila clash – a line up probably closer to the team we’ll see starting the Serie A season.

Osimhen grabbed his opener in the opening 59 seconds of the game, and doubled his side’s lead after just three minutes. He completed his hat-trick in the eighth minute.

The Nigerian star proved Gattuson right as the manager said the striker wasn’t just a target man, as the ex-Lille forward contributed two assists and sparked several other moves with his passes.

Legit.ng earlier reported that Victor Osimhen gave Napoli fans a glimpse of what to expect when the season finally kicks off in a few weeks.

The 21-year-old made a switch to the Italian League side this month in a deal valued around €50 million from Ligue 1 outfit Lille.

Osimhen attracted a number of interests from top European club managers including Jose Mourinho, but decided to sign for Gennaro Gattuso’s team eventually.