The Peoples Democratic Party Youth Assurance Movement has said that the All Progressives Congress (APC) is fine-tuning strategies to rig the poll, while Governor Godwin Obaseki, the PDP candidate is coasting to victory on the back of huge grassroots’ support.

National coordinator of the group, Prince Asunogie Tajudeen, made the comments during a press briefing in Benin city, the Edo state capital on Friday, August 28.

Tajudeen urged the Independent National Electoral Commission (INEC), the Nigeria Police Force and other security agencies to remain above board, stressing that “millions of Nigerians, home and abroad, are closely monitoring the events leading to the poll.” 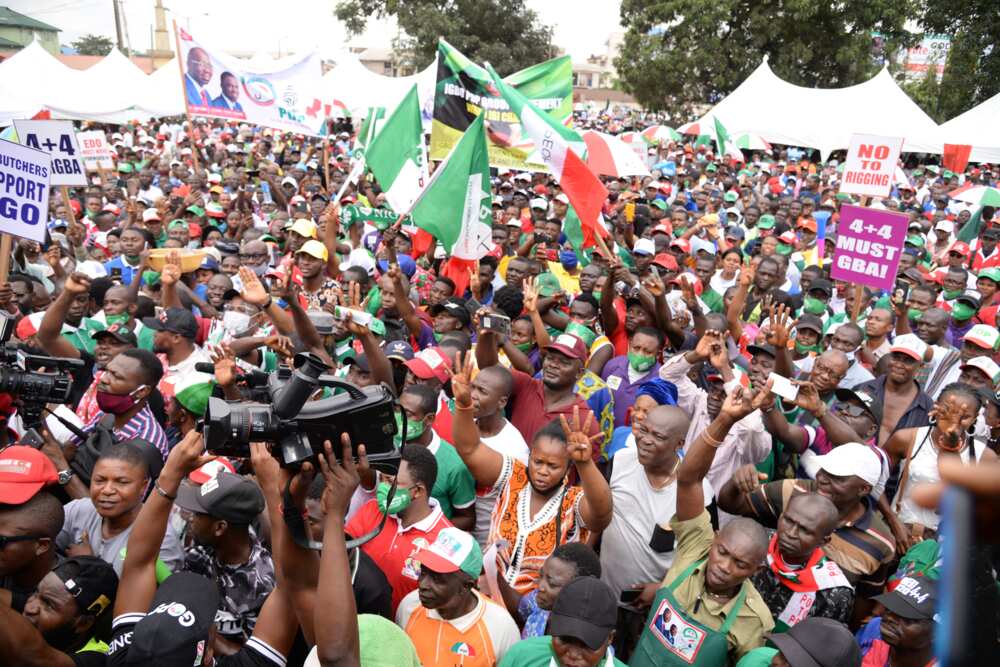 The large number of people who attend PDP’s ward-to-ward visits has been the highlight of Obaseki’s campaign. Photo credit: @EdoStateGovt
Source: Facebook

His words: “We are constrained to inform Nigerians and friends of our dear state, Edo, that there is a grand plot by the APC to subvert the will of Edo electorate in the September 19 gubernatorial election.

“Our sources within the APC fold, have informed us of this plot and as democrats, it is our obligation to share this information with Nigerians, home and abroad and all the relevant stakeholders in the Edo 2020 election.

“We have also been reliably informed that leaders of the APC made frantic efforts to bribe officials of INEC in Edo state to help them rig the poll, but this was rebuffed by the INEC officials.

“We appeal to the leadership of INEC to play by the rules and allow the will of Edo voters prevail on September 19.”

Speaking the PDP campaign in the state, he said: “From the daily feedback we have been receiving from the PDP’s ward-to-ward campaigns, we can report that Governor Godwin Obaseki is coasting to glory as thousands of Edo people have continued to endorse him for a second term.

“While Obaseki has penetrated the hinterlands to meet with the people at the ward level, commissioned projects executed by his government and assured them of the greater things to come after being re-elected, the APC has only put up appearances in some selected local government headquarters and communities.”

Legit.ng had earlier reported that ahead of the September 19 governorship election in Edo state, the PDP’s ward-to-ward campaign in the 192 electoral wards across the 18 local government areas of the state has continued to yield its desired result.

Strategically, in most of the wards visited, Governor Obaseki commissioned some state-sponsored projects in fulfilment of his 2016 campaign promises, while some new projects were flagged off.

Meanwhile, the Lead Pastor at HillCity, Reverend Olu Martins has maintained that he remains an unrepentant supporter of Governor Obaseki.

Martins who is also the executive director, Canvassers for Democracy and Rule of Law, was reacting to rumours that he has jumped ship to support the candidate of the APC, Pastor Osagie Ize-Iyamu, ahead of the September 19 governorship election in the state.

Speaking at a press conference in Benin city on Wednesday, August 26, Martins said he needed to denounce the rumour making the rounds before it wears the toga of truth.