– The former Nigerian minister described his victory as historical

Akinwumi Adesina has reacted to his reelection as the president of Africa Development Bank (AfDB), with the former minister describing his victory as another historical clarion call to serve.

Legit.ng reacted that Adesina was re-elected for a second 5-year term as the president of AfDB barely a month after he was exonerated of allegations of corruption by a special panel.

As a sole candidate for the multilateral lender, Akinwumi was re-elected by the bank’s Board of Governors at the ongoing AfDB virtual 55th annual meeting in Abidjan, Côte d’Ivoire on Thursday, August 27. 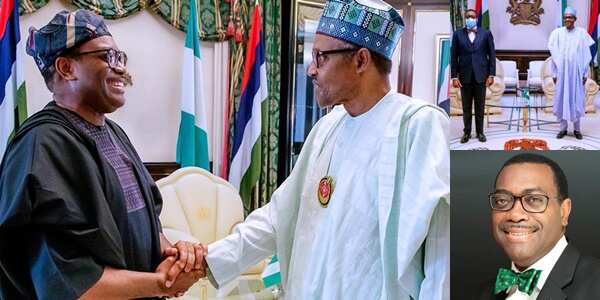 Adesina, who was first elected as the 8th AfDB president back in 2015, is the first Nigerian to serve as head of the bank group.

Reacting to his victory, the former Nigerian Agriculture minister said he made history because he was reelected by “100 per cent votes.”

“Of course, right now, the sound that is the loudest in my ears is the announcement of my re-election as President of the African Development Bank for a second term,”

Speaking further, Adesina described his history as another mandate to fulfil the vision of the bank.

On his Twitter handle on Friday, August 28, Adesina wrote amid an outpouring of love and congratulations: “Thank you so much Honorable Foreign Minister GeoffreyOnyeama for all your unflinching support and wonderful outreach on my behalf. I am very proud of H.E President Muhammadu Buhari — and I am very proud of Nigeria,” the former minister said.

Meanwhile, Legit.ng reported that Nigeria-born Kaycee Madu, who was recently appointed to be the minister of justice and solicitor general for the government of Alberta, in Canada has received a presidential accolade.

Madu was congratulated by President Muhammadu Buhari on Thursday, August 27, for his new appointment.