Eleven politicians from the southeast have been listed by a political pressure group, the Igbo for President Solidarity Congress (IPSC), as possible candidates for the Igbo presidency in 2023.

The group in a press conference in Abuja on Thursday, August 27, said the agitation for Biafra will be quelled if Nigeria produced a president of Igbo extraction in 2023.

According to Vanguard, the president of IPSC, Olukayode Oshinariyo said the 11 possible presidential candidates were selected after diligent scrutiny. 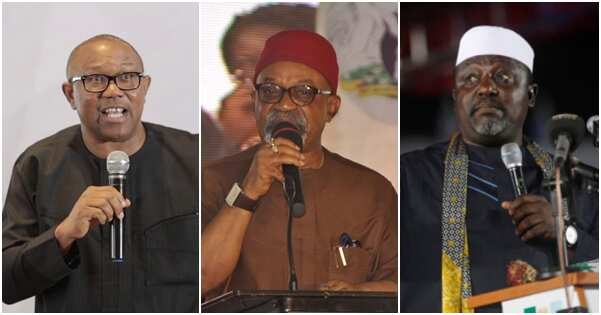 He said the group made a diligent inquiry about their education, experience, medical fitness, and age of nominated personalities before compiling the list.

The president of the group said the IPSC will engage in further consultation to discuss and examine the characters and integrity of the eleven nominated personalities from the south-east zone.

He said the group will adopt a candidate after the final selection process.

IPSC urged people of the southeast geo-political zone to embrace the path of peace and unity to realise the Igbo presidency.

In another news report, the minister of labour and productivity, Dr Chris Nwabueze Ngige, has said that the 2023 Igbo presidency project was realisable.

WARNING: 5 things you should not do during the elections

The minister said this in an interview with Daily Sun published on Thursday, August 20.

Ngige, however, said he would not want to dwell so much on it since the incumbent, President Muhammadu Buhari, is yet to complete the first half of his second tenure.

Meanwhile, as the clamour for a Nigerian president of Igbo extraction in 2023 continues to gather momentum, Ndigbo Lagos has said the zoning of the next leader should be rotated to the southeast geo-political zone and not to any other Igbo speaking zone.

The umbrella body of the Igbo nationality groups disclosed this in a statement signed by its president-general, Gen Obi Umahi (Rtd), on Friday, August 21, The Nation reports.

According to Ndigbo Lagos, when it is the turn of other Igbo speaking zones they can seek the office of Nigerian president from where they fall into either south-south or northcentral.