‘You can’t beat a holiday in Cornwall!’ Matt Hancock attributes summer tan to week’s surfing staycation as he insists ‘everybody deserves a break’ after furore over Boris Johnson’s getaway to Scotland 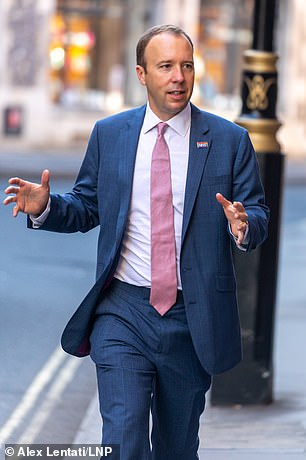 Matt Hancock today attributed his glowing sun tan to a week’s surfing staycation in Cornwall as he defended ministers for going on holiday during the coronavirus crisis.

The Health Secretary was asked ‘where did you get that tan?’ during an LBC Radio interview this morning as he was grilled about his summer glow.

He revealed he had recently spent a week surfing in the South West of England.

Boris Johnson faced criticism earlier this month for going on a holiday to Scotland and for failing to pause his break to intervene in the unfolding A-level and GCSE results fiasco.

But Mr Hancock backed the PM and other ministers who have downed tools as he said that ‘everybody deserves a break’.

Asked about the origins of his tan, Mr Hancock replied: ‘Cornwall.’

‘It was absolutely fantastic, glorious – holiday at home, you can’t beat Cornwall in the summer.’

Mr Hancock, who contracted Covid-19 in March, has been a central figure in the Government’s response to the pandemic.

Defending his decision to take a break, he said: ‘I’ve had one week of holiday this year. I think everybody deserves a break.’

Holidays for Mr Johnson and his top team have proved a contentious topic of late after a row over the timing of the PM’s break.

Mr Johnson’s public appearances this week, in both Devon and Leicestershire, suggested he did not experience the same levels of sunshine during his visit to Scotland as the Health Secretary enjoyed in Cornwall.

The Conservative Party leader and his fiancee, Carrie Symonds, cut short their holiday after pictures of their cottage were published.

The Prime Minister, his partner and their baby son Wilfred – along with dog Dilyn – were reported to be staying in a remote three-bedroom house with ‘spectacular views’ towards the islands of Raasay, Rona and Skye.

But it was claimed they were forced to abandon their break because it was no longer considered safe for them to stay following the emergence of the pictures.

Meanwhile, embattled Education Secretary Gavin Williamson came in for criticism after accusations surfaced in the Sunday Times that he reportedly cancelled a key meeting to go on holiday in Scarborough the week before the A-level exams debacle.

He subsequently explained his actions in a tweet as he said: ‘I cancelled our family holiday abroad this year to focus on the challenges COVID-19 created for the education sector.

‘Over the summer, I went to see family in Scarborough for the first time since lockdown, and while there I was in constant communication with the Department.

Gillian Keegan, an education minister, was also criticised after sharing photographs of herself in France as the results drama unfolded.

And last month Transport Secretary Grant Shapps arrived in Spain on the same day that he and other key Cabinet ministers decided to impose quarantine measures on those returning from the European country following a spike in Covid-19 cases.

The former Tory chairman cut his break short and had to work from home as part of his 14 days of self-isolation upon his return.