DJ Cuppy is among the Manchester United fans who wants Lionel Messi to make a switch to Old Trafford this summer.

The Barcelona captain has officially submitted a transfer request to La Blaugrana after falling out with the club’s top hierarchy.

Messi along with his teammates were humiliated in the Champions League by Bayern Munich, conceding eight goals against and scoring just two.

A number of clubs including Inter Milan, Man City and Man United have been linked to sign the 33-year-old attacker. DJ Cuppy who recently dumped Arsenal for the Red Devils also made the request on her social media handle, pleading for the Argentine superstar to switch to Old Trafford.

Meanwhile, Legit.ng had earlier reported that Pep Guardiola has begun talks with his former player and Barcelona superstar Lionel Messi, according to Goal.

The 33-year-old is poised to leave the Camp Nou after handing a transfer request and asking the club to let him go for free due to the terms in his contract.

But La Blaugrana have insisted that he has a £630million release clause which would expire in the summer of 2021. 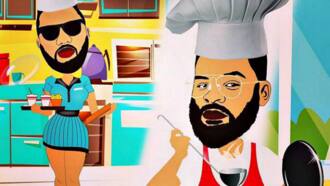 Legit.ng also reported that Nigerian famous DJ Cuppy has been welcomed to Manchester United Football club after she vowed to join the team as a fan if Odion Ighalo scored against Norwich City in the FA Cup.

DJ Cuppy, who goes by the name Florence Ifeoluwa Otedola, is the daughter of Nigerian billionaire and businessman Femi Otedola.

Until her switch to Man United, Cuppy supported Arsenal football club and emotionally announced her exit from the club after six years as a supporter of the team.