– An 11-month-old baby, Chyla Rae, has gone viral after video of her dancing to her mom’s lullaby before bedtime became popular

– Instead of her to sleep as mom, Chane Milner-Joseph, churned out bedtimes songs, she decided to stand in her cot and dance

A little baby has left many amazed as she trended on social media after she was caught on camera dancing to her mom’s bedtime lullaby.

The toddler’s mother, 27-year-old Chane Milner-Joseph, said that it is her routine to always sing to Chyla Rae before she sleeps, Daily Mail reports.

When she discovered the 11-month-old baby was standing and dancing to her gentle lullaby, the woman was overjoyed. 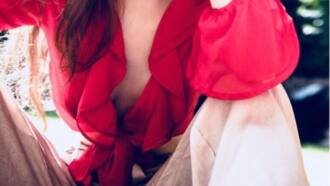 Who is India Eisley? Top facts about her career and family

She filmed the video and posted it on Twitter, a short clip that has since grossed close to 2 million views as at the time of writing this report.

“I lay Chyla in her cot, ready for bed and put on lullabies which I do every night but one day she decided to get up and start dancing,” she said.

Of her dancing nature, the woman added: “’She dances all the time. When she’s eating, when I brush my teeth, if she hears a packet rustling, to her toys or any melodic sound.

“I wasn’t surprised she dances a lot; she is such a happy little baby with such a big personality and character”

In speaking about the popularity of her baby’s video online, she said that she did not know it would get that much attention, adding she uploaded it just for friends. Watch the baby dance below:

Top facts about Sophie Brussaux: Who is Drake’s baby mama?

Below were some of the reactions it got:

Meanwhile, Legit.ng earlier reported that in a video posted by Twitter user @ChristoThurston, a baby could be seen busting all sorts of moves while an unknown lady cheered her on in the background.

Twitter users were quick to join in on all the fun, commenting on the baby girl’s amazing dance skills. While some asked for some dance tips, others simply posted funny memes.

In other news, a proud Nigerian dad, Oluyemi Fasipe, released a sweet daddy-son-time video he had with his son in a mall.

In the short clip, his son could be seen grabbing whatever beverage he could lay his hands on as he dropped them in a shopping trolley.

What happened to Jessica Hahn and who she is now

Oluyemi jokingly said in a tweet that the boy will start following him to work with the way he confidently shops with the money he never made.

Is it right for parents to fight in front of their children? | Legit TV