– Sergio Aguero has removed his No.10 from his Instagram handle to validate Lionel Messi’s move to Man City

The Argentine striker removed the No.10 from his Instagram handle and many believe Messi is just a click away from joining the Citizens. 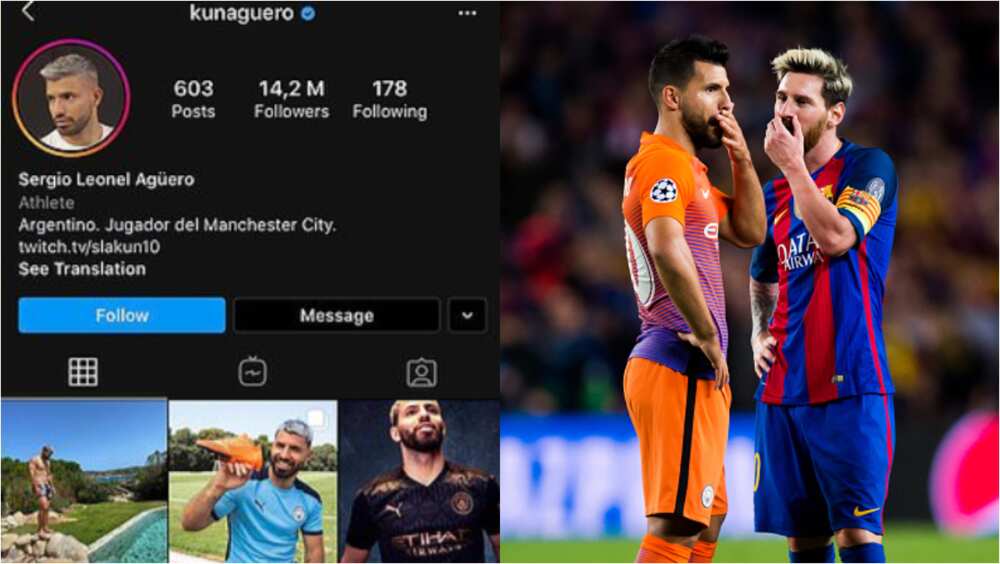 Messi has told Barcelona that he wants to leave the club in the summer and reports claim his father Jorge has arrived in Manchester to hold talks over a possible move.

City manager Pep Guardiola has also tried to lure his former player to the Etihad in the past but it now seems his dreams are coming through.

Aguero’s actions on Instagram has now sparked off reactions from City fans on Twitter which suggests the deal for Messi is likely to happen.

A third wrote: “Kun Aguero changing his Instagram username from kunaguero10 to kunaguero. Hmmm! what could that mean?.”

A forth commented on Aguero’s actions: “Aguero removes “10” from his Instagram username! It’s happening.”

A fifth added: “Aguero has changed his username from KUNAGUERO10 to KUNAGUERO on Instagram. It’s done y’all. Lionel Andres Messi is leaving to Manchester city under pep.”

Meanwhile, Legit.ng had earlier reported that Pep Guardiola has begun talks with his former player and Barcelona superstar Lionel Messi, according to Goal.

The 33-year-old is poised to leave the Camp Nou after handing a transfer request and asking the club to let him go for free due to the terms in his contract.

But La Blaugrana have insisted that he has a £630million release clause which would expire in the summer of 2021.