– Minister of state for labour and employment, Festus Keyamo, has lambasted Fani-Kayode over comments

– Keyamo, however, described Fani-Kayode as an arrogant person who has no regard for the media

The minister of state for labour and employment and human rights lawyer, Festus Keyamo, has come hard on the former minister of aviation, Femi Fani-Kayode, for publicly insulting a journalist in Calabar, the capital of Cross Rivers state.

Legit.ng gathered that the ex-minister poured invective on the journalist for asking a question at a press briefing.

Daily Trust reports that Fani-Kayode, who was visibly angry, told the reporter he was “foolish” for asking him who “bankrolled” his tour of projects in Cross River and other states in the south-south.

“I could see from your face before you got here, how stupid you are. Don’t ever talk to me like that,” Fani-Kayode kept yelling at the reporter who was still standing and apologising — “I am sorry, sir.” 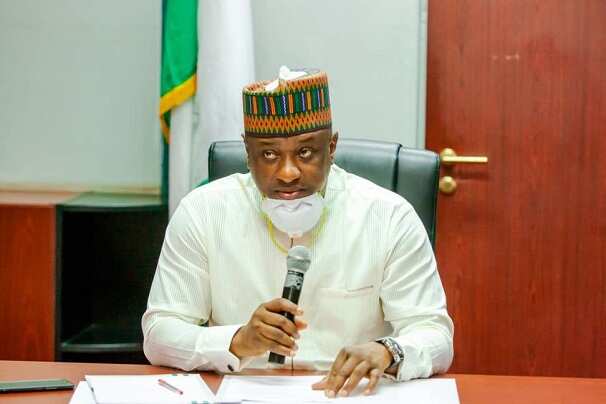 “Don’t judge me by your own standards. I have been in politics since 1990. I am not one of those politicians that you think will just come…. I was taken, I have been locked up how many times by this government. I have been prosecuted, unlike most of these politicians you follow for brown envelopes!

“Don’t ever judge me by that standard. I spend, I don’t take and I am not a poor man, I have never been and will never be,” he had said.

Reacting to Fani-Kayode’s outburst, Keyamo described the ex-minister as arrogant, self-centred, who lack empathy and consideration for other people.

He tweeted: “Narcissistic personality disorder is a mental health disease that involves a pattern of self-centred, arrogant thinking and behaviour and a lack of empathy and consideration for other people. The affected persons are often cocky, manipulative, selfish, patronizing and demanding.”

In his reaction to Keyamo’s comment, a Twitter user @SMILE09548266, said everyone has his own personality, adding that people keep feeling like he was oppressive towards the journalist.

“Everyone has his own personality, and there are times when you can’t hold it anymore. People keep feeling like he was oppressive towards the journalist. The truth still stands that he was irritated by the diverted question,” he said.

Another Twitter user, Samuel Okechukwu @samuelIfea, said Fani-Kayode goofed by insulting the reporter, adding that pride took over the ex-minister.

“Ffk goofed. Arrogance, pride took over him.. Fmr minister and barristers don’t go broke .. I don’t blame him, Obj made him minister now he could talk so arrogantly to a fellow man. That guy falls my hand by letting him insult him that length. He sings praises to feed his belly,” he said.

Meanwhile, Legit.ng had previously reported that three titleholders of the Shinkafi Emirate Council of Zamfara state tendered their letter of resignation.

It was reported that the resignation was over the chieftaincy title conferred on Fani-Kayode.

In a statement signed by the three officials, there are conditions in which such titles should be conferred and the former minister has not met any of them.