– According to the ace comedian, he’ll pick bad government over natural disasters

Nigerian comedian and actor, Bright Okpocha professionally known as Basketmouth, has shared his thoughts concerning the wildfire in California, United States of America.

More than wildfires, many sparked by lightning, have burned more than 1.25 million acres in the state since August 15. The fires have also claimed the lives of 7 people, destroying more than 1,400 buildings destroyed.

Reacting to this, Baskmouth recently took to his Instagram story to state that he will rather pick bad government over natural disaster. 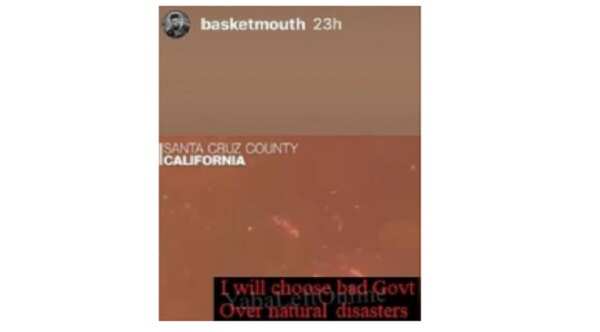 Screenshot of his post has since gone viral and many Nigerians have shared their thought, majority of whom disagreed with the comedian.

Below are some comments online:

peryardankarashop: “Na wa o. So we should be happy our government is bad?”

nifemibrown: “Lol. Let’s not begin to think bad government is a blessing in disguise. That’s a regressive and lazy way of thinking about our biggest problem.”

official_chris11: “Because he is making money with his dry jokes.”

sir_eltee: “It’s very insensitive to try and justify bad government in Nigeria simply because we don’t experience natural disasters like other countries. It’s even worst over here because ours can be avoided but theirs cannot. We need to do better.”

queen__vee_____: “Natural disasters ain’t frequent…. poverty will kill more people faster in comparison to natural disaster. Imagine if we had both.”

Check out the single by Blaqbonez – Jesus is Black

nick286286: “This kind of foolish statements make Nigerians not to want a CHANGE. He is daft!”

In other news, while it is the norm for women to take on their husband’s surname when they get married, a certain design manager has revealed on Twitter that it is going to be the other way round for him.

Identified as Ryan Morrison, he took to the microblogging platform to reveal that he would be getting married soon and intends to take his wife’s last name instead of her taking his.