– Recently, the billionaire’s son was spotted waking his partner from sleep with a kiss

– The former Head of House also relocated her to his bed

One of the most admirable relationships in the house is Erica and Kiddwaya’s. The BBNaija Lockdown couple has warmed their ways into the hearts of many Nigerians.

Meanwhile, irrespective of what other housemates think about them, they do not stop showing love and affection towards each other.

Recently, a video of Kiddwaya waking Erica from sleep was spotted on the photo-sharing app, Instagram. In the video, the billionaire’s son was seen walking into Erica’s room. The beautiful young woman was fast asleep as she used her yellow duvet to cover herself up from the cold. As soon as Kiddwaya got to her bed, He gave her a kiss on her forehead.

Knowing that no one could do that to her except her partner, Erica stirred from sleep and woke up.

As they left for his own room, Kiddwaya tapped Erica’s bosoms playfully. He then led her to his bed and left her to sleep.

In other news, Legit.ng earlier reported that Kiddwaya stared longingly at Erica as she walks past.

The HoH was having a conversation with another housemate called Trickytee. While they were talking, Erica walked past the two and Kiddwaya could not help but stare at her till she took a seat just in front of them. 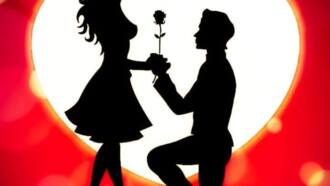 Listen to the fantastic piece by BlackFace – Collabo

His conversation slowly stopped and when Trickytee noticed, he tapped him on his beards.

Another video of the duo showed Kiddwaya fondling Erica’s bosoms while telling her that they are not small but cute. He asked her if she would like to get surgery to enhance them and she responded in the negative.

Meanwhile, Erica had once told Kiddwaya that she does not want drama and then asked them to be just friends.

According to Erica, she does not want boy drama because she cannot handle it. She also spoke on when they made out in the house.

Erica admitted that though she enjoyed it, it was unplanned. She also added that she does not think she is ready to handle all the things that come with their relationship.