– A woman has posted on Twitter a portrait she painted of late basketball star, Kobe Bryant

A woman has taken to Twitter to share a portrait which she painted of late basketball superstar, Kobe Bryant. Yellaxoxo took to her page to post a picture of herself standing besides the portrait, which she explained she started in September 2019.

“Started last September and couldn’t find it in me to finish after January. Nearly an entire year later, here we are, just in time for Kobe Day. I still don’t feel like you’re done, maybe I never will. Might just keep adding special details and touches to you forever,” she wrote.

The portrait, which displays her amazing artistry, received thousands of compliments from Twitter users who admired how life-like Kobe was portrayed.

Kobe died in January this year after a horror helicopter crash claimed his life along with the life of his 13-year-old daughter, Gianna Bryant, and seven others. The portrait, as explained by Yellaxoxo, came just in time for Kobe Day, which was celebrated on August 24.

Die-hard fans of the basketball legend as well as fans of Yella’s work all took to the comment section to either pay tribute to Kobe or compliment the artist on her talent.

Here are some of those comments.

“It’s amazing how this looks exactly like a picture taken with an expensive camera. Awesome job.”

“This is unbelievable, your are crazy talented.”

“Honey this is amazing. It literally looks like a pic. Thank you for sharing this with us. I played ball in school and Kobe was my age and we were all legit mesmerised by this “kid”. He has left an amazing legacy #BlackMambaForever.” 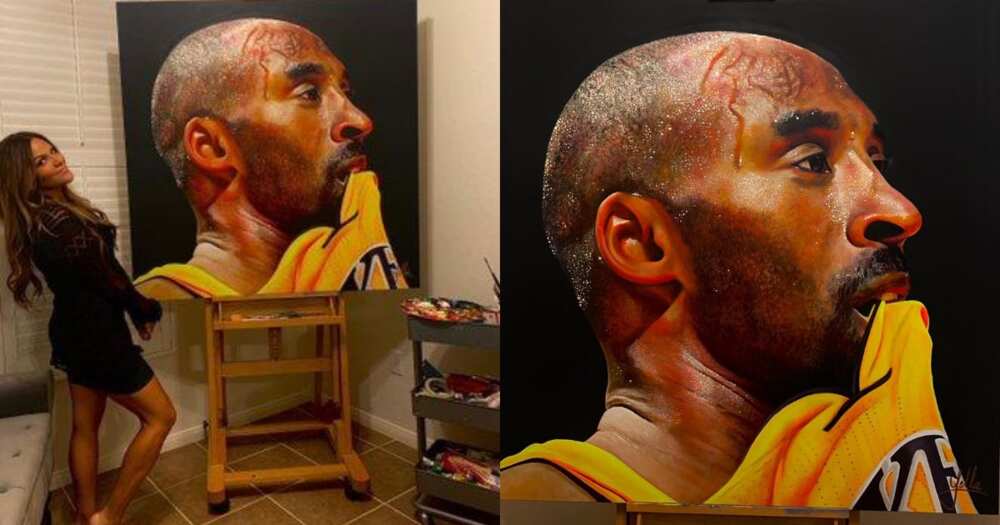 Meanwhile, Legit.ng previously reported that the famous towel basketball icon Kobe Bryant wore during his last appearance match in the NBA fetched a staggering £27,000 at an online auction.

Bryant draped the towel over his shoulders as he made his farewell speech at Staples Centre in Los Angeles, before a fan grabbed it.