Birthdays are special occasions in one’s life as congratulations come in from all quarters. To make the day the best, many give themselves different treats.

Perhaps that was the intention of a woman with the Twitter handle @jaymac_kenzie when she pulled off a stunt to get people talking as they tried hard to guess her age.

In a post on the platform, as it is customary for many on their birthdays, @jaymac_kenzie held ballooned numbers.

What makes hers different was that she held up the same numbers in different orders in a way that leaves her real age to the imagination of all.

In the first frame, she held the numbers 9 and 1 which passed the message that she is 91 years old. Looking at her picture, she really does not look that old.

This left people asking if she meant she is 61, 19, or 16. Her birthday tweet did not only get thousands of retweets, but she had also quoted comments in large numbers too. 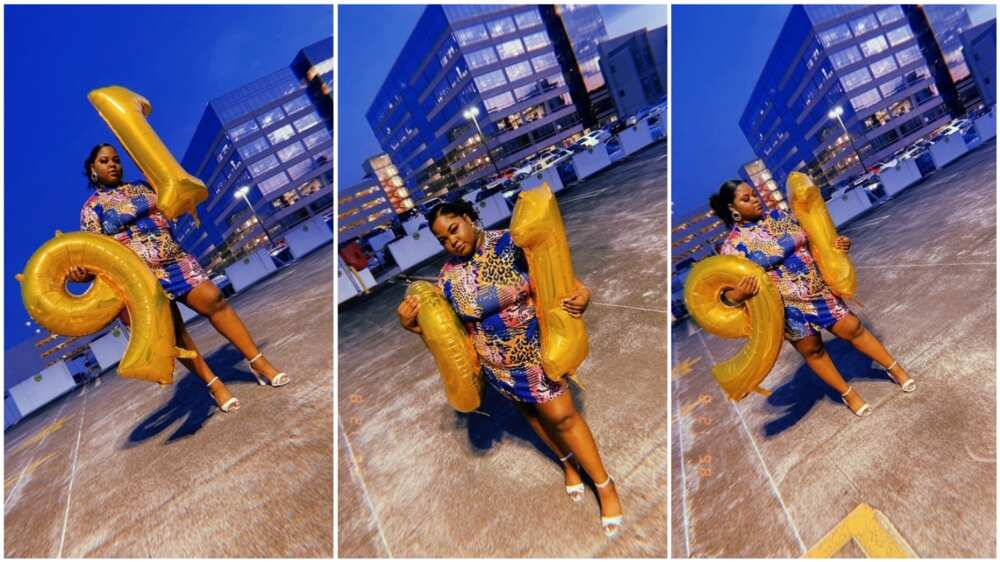 Below was how people reacted:

Meanwhile, Legit.ng earlier reported that a Nigerian lady identified as Ehizogie Ogbebor clocked the age of 35 and also moved into her palatial 7-bedroom mansion.

An excited Ogbebor who works as an interior designer, took to her official page on the photo-sharing app, Instagram, to give her friends and followers a grand tour of the luxury home.

What happens when the Queen dies? ‘Operation London Bridge’ step by step

The celebrant in one of her caption noted that the house gift is not just for herself but also for her children. Ogbebor while inspiring fellow women noted that they cannot be stopped.

“My 35th birthday gift to self and kids…Women we are unstoppable,” she wrote. Sharing a different photo post that captured the outer view of the new house, the celebrant gave all the glory to the almighty God who made it possible.

As she flooded her page with pictures, some Nigerian celebrities, as well as followers, were seen in the comment section wishing her a happy birthday and congratulating Ogbebor.

Most Nigerians dream of spending their next birthday abroad | Legit TV