Girls Aloud’s Sarah Harding has revealed she’s been diagnosed with breast cancer and it has spread to ‘other parts of her body.’

The singer, 38, revealed her diagnosis to fans on Instagram on Tuesday, after two years of being absent from social media, and said she was ‘fighting as hard as she could.’

Sarah’s post was soon flooded with support, including her bandmate Cheryl, who posted a heartbreak emoji under the post. 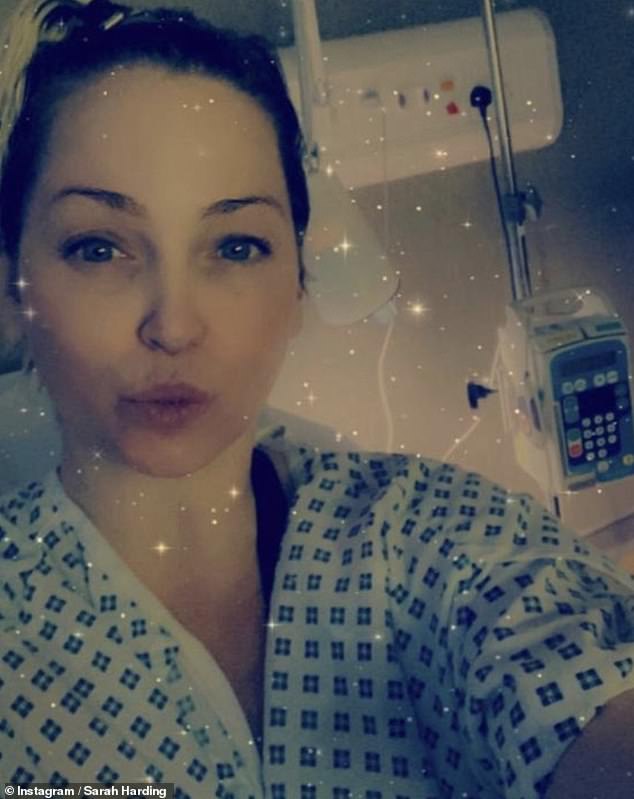 Sad: Girls Aloud’s Sarah Harding has revealed she’s been diagnosed with breast cancer and it has spread to ‘other parts of her body’

She wrote: ‘Hi everyone, I hope you are all keeping safe and well during these uncertain times. I’ve not posted on here for so long, thank you to everyone who has reached out to check in on me, it really does mean a lot.

‘I feel now is the right time to share what’s been going on. There’s no easy way to say this and actually it doesn’t even feel real writing this, but here goes.

‘Earlier this year I was diagnosed with breast cancer and a couple of weeks ago I received the devastating news that the cancer has advanced to other parts of my body.’ 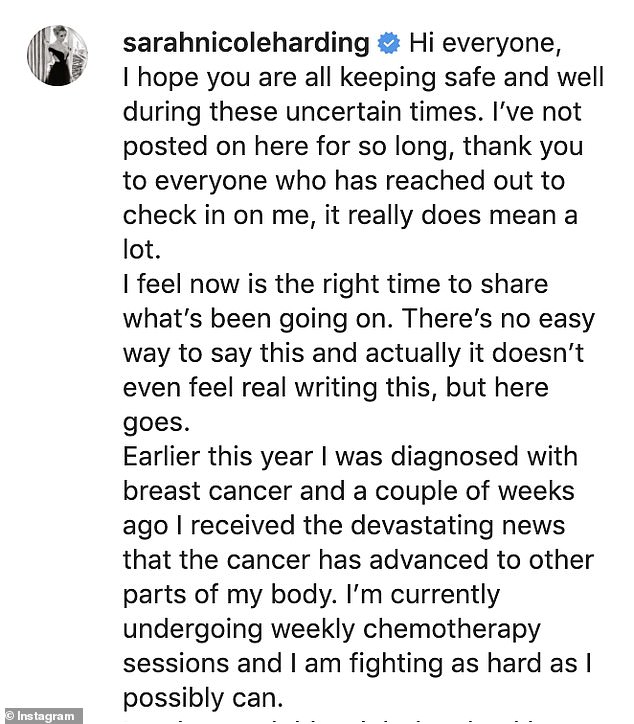 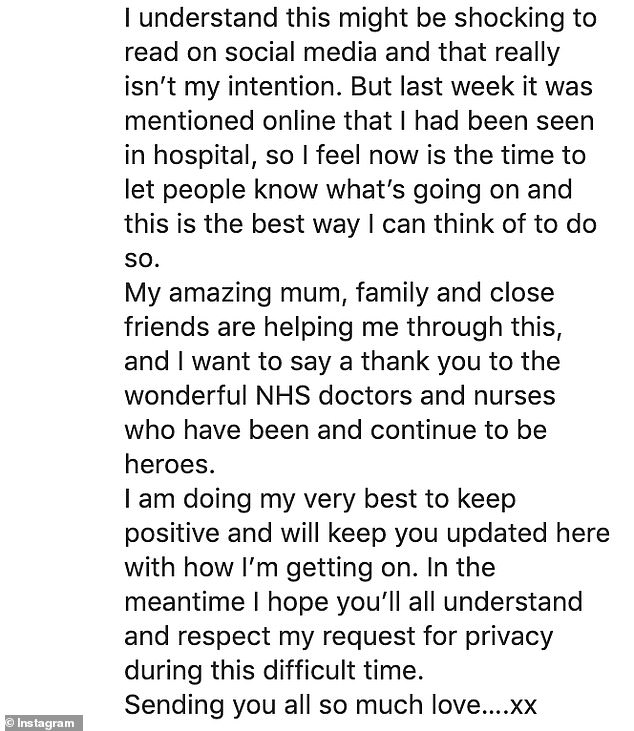 Sarah continued: ‘I’m currently undergoing weekly chemotherapy sessions and I am fighting as hard as I possibly can. I understand this might be shocking to read on social media and that really isn’t my intention.

‘But last week it was mentioned online that I had been seen in hospital, so I feel now is the time to let people know what’s going on and this is the best way I can think of to do so.

‘My amazing mum, family and close friends are helping me through this, and I want to say a thank you to the wonderful NHS doctors and nurses who have been and continue to be heroes.

‘I am doing my very best to keep positive and will keep you updated here with how I’m getting on. In the meantime I hope you’ll all understand and respect my request for privacy during this difficult time. Sending you all so much love….xx.’

Sarah has maintained a low profile in recent years and changed her Twitter bio to read ‘taking a timeout’ last year.

In May she returned to the social media for the first time since July 2019, sparking a delighted reaction from fans.

She shared a series of tweets after her ex Chad Johnson claimed last year that ‘nobody has really heard from her,’ amid claims she decided to ‘quit fame’ and go into hiding.

Sarah’s first post showed a gif of a T-Rex reaching out his arms saying: ‘I miss you this much’.

Following her initial dinosaur inspired post, the blonde beauty was met with comments from delighted fans who missed her during her ‘timeout.’

And she was not done there, the Promise singer then celebrated by Star Wars Day by adding ‘#MayThe4thBeWithYou,’ before telling fans she was a ‘new found fan girl’ of the franchise.

Finally, Sarah retweeted a post from a Girls Aloud fan that said: ’15 years ago today #GirlsAloud opened up their amazing debut Tour ‘What Will The Neighbours Say?’. What’s your favourite track from the album?’

In April, her ex-boyfriend Chad said that he doesn’t know where she is and nobody has ‘really heard from her’ after it was reported last year she had ‘quit fame’ to go into hiding.

Sarah and Chad embarked on a brief romance after meeting in the Celebrity Big Brother house in 2017, but split after struggling with the long-distance aspect of their relationship.

Talking to The Sun, Chad said: ‘I know she wasn’t very happy with the other girls. I followed some of the others on Twitter and she blew up at one point.’

The Bachelorette star went on to claim that Sarah ‘regretted’ her time in the famous girlband, who formed in 2002 and ended in 2013, amid reports she had a ‘feud’ with her ex-bandmates.

Chad added: ‘It seemed she felt she’d partied so much she’d missed out on a lot of being in the moment.’

The US reality TV star also spoke about their split, revealing they eloped to her house in the ‘middle of nowhere in England’ for a week after their appearance on CBB.

Chad said: ‘It was not very good. My ex posted a video of me cooking with her on YouTube and Sarah lost it. After that it was pretty much downhill. I think it kind of f***ed her up after our relationship — I just bailed.’

MailOnline contacted representatives of Sarah Harding for comment at the time.

It was reported late last year that Sarah had ‘quit fame’ and gone into hiding following an unsuccessful music comeback.

A source claimed the star no longer has a manager or publicist, and her Twitter and Instagram accounts had been scarcely used.

They also told The Mirror: ‘She has nothing going on work-wise right now and hasn’t had anything in quite a while.’

What is breast cancer?

Breast cancer develops from a cancerous cell which develops in the lining of a duct or lobule in one of the breasts.

When the breast cancer has spread into surrounding breast tissue it is called an ‘invasive’ breast cancer. Some people are diagnosed with ‘carcinoma in situ’, where no cancer cells have grown beyond the duct or lobule.

Most cases develop in women over the age of 50 but younger women are sometimes affected. Breast cancer can develop in men though this is rare.

Staging means how big the cancer is and whether it has spread. Stage 1 is the earliest stage and stage 4 means the cancer has spread to another part of the body.

The cancerous cells are graded from low, which means a slow growth, to high, which is fast growing. High grade cancers are more likely to come back after they have first been treated.

A cancerous tumour starts from one abnormal cell. The exact reason why a cell becomes cancerous is unclear. It is thought that something damages or alters certain genes in the cell. This makes the cell abnormal and multiply ‘out of control’.

Although breast cancer can develop for no apparent reason, there are some risk factors that can increase the chance of developing breast cancer, such as genetics.

What are the symptoms of breast cancer?

The usual first symptom is a painless lump in the breast, although most breast lumps are not cancerous and are fluid filled cysts, which are benign.

The first place that breast cancer usually spreads to is the lymph nodes in the armpit. If this occurs you will develop a swelling or lump in an armpit.

How is breast cancer diagnosed?

If you are confirmed to have breast cancer, further tests may be needed to assess if it has spread. For example, blood tests, an ultrasound scan of the liver or a chest x-ray.

How is breast cancer treated?

Treatment options which may be considered include surgery, chemotherapy, radiotherapy and hormone treatment. Often a combination of two or more of these treatments are used.

How successful is treatment?

The outlook is best in those who are diagnosed when the cancer is still small, and has not spread. Surgical removal of a tumour in an early stage may then give a good chance of cure.

The routine mammography offered to women between the ages of 50 and 70 mean more breast cancers are being diagnosed and treated at an early stage.