A chilling video of a man narrowly escaping death after a speeding car misses him by inches has gone viral.

The incident, recorded from a CCTV camera, occurred in Karela’s Kollam district in India and was first shared on Twitter by @Nisarpari on Saturday, August 22, according to The News Minute. 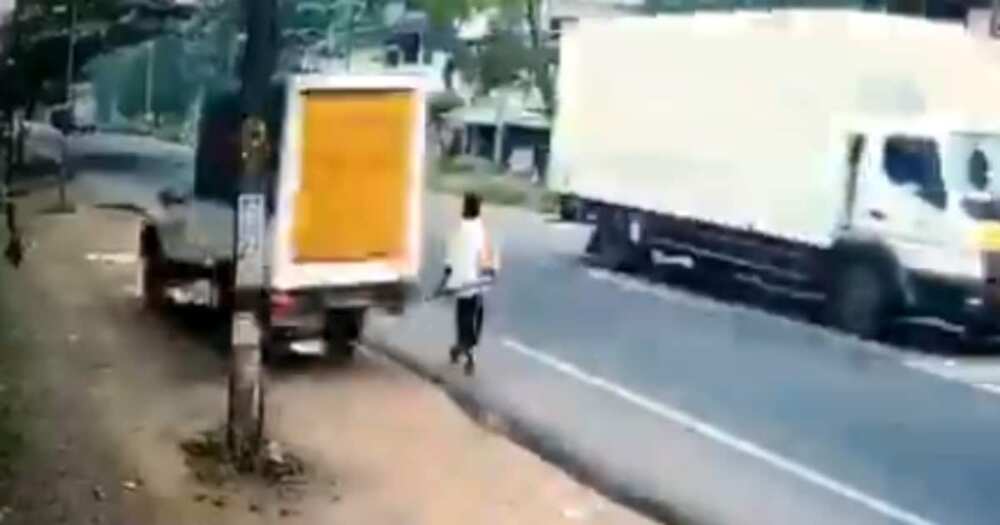 The Indian man seen on the snap was nearly hit by the white and yellow pickup. Photo: @nisarpari
Source: Twitter

The short clip showed a man walking on the side of the road when a pickup van swerved past him on the sidewalk at a high speed and missed him by a whisker.

The shocked man could be seen in a panic state as he watched the car go past him before turning back and running a few metres.

The video which, according to The News Minute, was recorded on Friday, August 21, has also been shared by local netizens and even celebs.

Many, like Churchill Ndambuki and Pierra Makena, attributed the escape to God’s protection.

Here are some other reactions from social media users:

In other news, a Russian driver stared at death in the face but still made it out alive through a miracle.

The man behind the wheels had a child seated at the passenger’s seat of his car before his van collided with a saloon vehicle on a highway.

It was rainy and visibility on the road was compromised.

What was meant to end in a tragedy turned into a divine moment of salvation after the kid was thrown out of the window but still managed to survive.

When the two cars collided, the child found himself on the ground but was luckily unhurt and stood immediately he felt the impact.

Confused, the little one started running for safety and a driver in another car sprung into action immediately.

The man who was passing by left his car and quickly grabbed the little boy, thus saving his life.