– Ubi Franklin recently shared a piece of advice to fans of reality show, BBNaija who engaging in social media wars

– In a post shared to his Instastory, he urged them not to take the show seriously

– According to him, some of their favourites would still come out of the house to call them lazy

Aas the BBNaija Lockdown edition journeys to its end, the fight for the grand prize has become even more intense. To this, Ubi Franklin has come out to advise fans not to take the show too seriously.

In a post shared to his Instastory, he pointed out that the show will definitely come to an end and that the same housemates they are fighting for will be replaced by a new set of housemates in yet another edition.

Ubi Franklin who advised against getting bitter and fighting over one housemate or the other, added that these same housemates they are fighting for will still be the ones to call them lazy when they come out of the house. 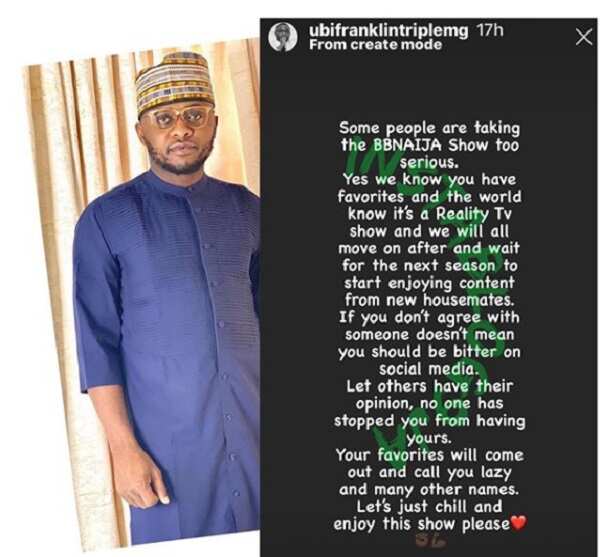 Many people who saw the post believe the businessman was shading Mercy Eke, winner of the 2019 BBNaija edition, Pepper Dem.

Recall Legit.ng earlier reported on how she received heat following some utterances she made in a recent video circulating the internet.

Since the launch of the 2020 edition of the show known as the Lockdown, many people have chosen sides including celebrities. However, it appears Mercy isn’t ready to pick a side yet despite the pressure from fans.

In the video, the reality star expressed annoyance at being barraged with comments from fans asking her to pitch her tent with at least one of the housemates.

She explained that unlike them (BBNaija fans), she is too busy to sit at home and follow the show.

Meanwhile, DJ Obi in a new Twitter post, has stated that his experience at the recently held Saturday Night party in the BBNaija house will be the last night he’ll DJ without a ‘technical rider’.

Recall the housemates had a night of fun on the night of August 22. However, it was not all fun as the sound system kept messing up the flow. This earned DJ Obi some criticisms from fans of the show.

Well, it appears the DJ is not going to take the backlash lying down as a day after the party, he took to his Twitter account to address the issue and make fans see why it wasn’t any fault of his that the party flopped.

Fascinating details about the Ninja and Twitch feud