– Cristiano Ronaldo and Andrea Pirlo have been seen together in training

Portuguese football legend Cristiano Ronaldo has been spotted together for the first time with Andrea Pirlo as Juventus began training ahead of the coming season.

The 2020/21 season will be starting on September 19, and Juventus chiefs and players know that they have not time to waste again.

Juventus who are the reigning champions of Italy recently sacked Maurizio Sarri after his failure to bring the Champions League title to Turin this month.

Old Lady chiefs however decided to hire former star Andrea Pirlo who has been given the mandate to bring titles to the club next term.

Andrea Pirlo resumed training on Monday, August 24, where he met all his players one on one and charged them to do well for the club.

Ronaldo who recently returned from holiday with his girlfriend and family was in joyous momentum when he met Andrea Pirlo.

The Portugal international and Andrea Pirlo are not new to each other as they both faced many times on the pitch before the lather retired.

Cristiano Ronaldo faced Andrea Pirlo in the Champions League when the Portuguese was playing for Real Madrid, while the Italian was with AC Milan.

Last term, Cristiano Ronaldo netted 31 goals in 33 games for Juventus who ended the season with the League crown. 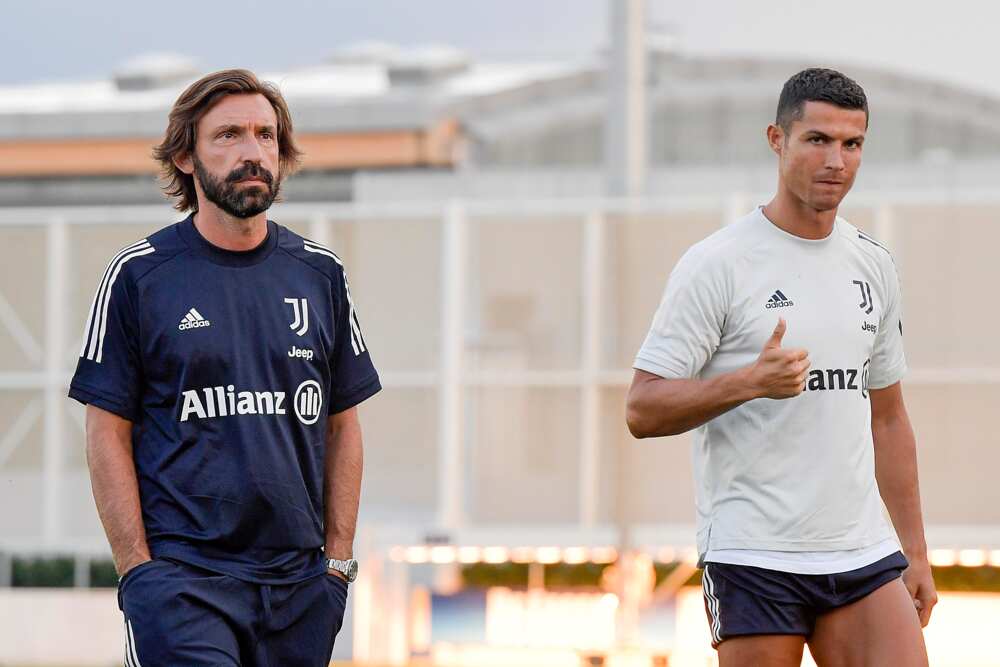 Earlier, Legit.ng had reported how Cristiano Ronaldo is looking to reunite with former teammate at Real Madrid, Karim Benzema, with reports that the Portuguese striker has told the Juventus board to sign the Frenchman.

Both strikers lit up La Liga before Ronaldo announced his departure in 2018 to join Italian champions Juve.

Although the Old Lady won the Scudetto at the just-concluded season, the club is believed to be busy in the transfer window especially with the arrival of new boss Andrea Pirlo who just replaced Maurizio Sarri.

With Paulo Dybala’s future at the club also in doubt, despite the Argentinian winning the Serie A most valuable player of the season award, Juventus will definitely be in search of another striker.

Reports also have it that the club is also considering making Ronaldo available for £54 million as financial crisis continues to distraught their plans.