– A Nigerian man has gifted his wife, also a nursing mother, a beautiful car

A Nigerian man with the Twitter handle @AdesojiMinkail has rewarded his wife in a very beautiful manner with a car.

Before he gave the car, he had brought it into their compound the night before without informing her. The next day, he called her out to see it.

When the woman, a nursing mother, set her eyes on the new whip, she was short of words as all she kept saying was “baby baby” before she ran towards the car.

On Sunday, August 23, the man’s first tweet was captioned with “Let’s see how long it takes for her to notice”.

In a subsequent tweet, he shared the video of the presentation of the car key and how his wife responded while carrying their little baby.

Many who reacted praised the man’s gesture in bringing joy to his woman as they prayed for him. 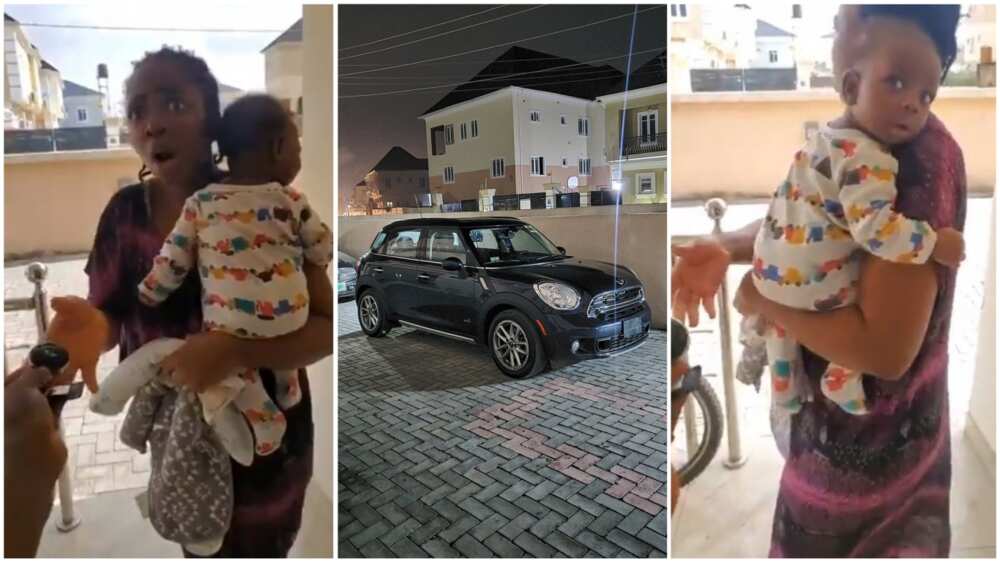 See the man’s tweets below:

Below are the ways people reacted:

Meanwhile, Legit.ng earlier reported that a pregnant woman with the Twitter handle @Jeniferflee painted how wonderful living in love could be when she shared on Sunday, August 23, what her husband did for her.

Jenifer said just when she was feeling unwell, her husband went out and got her the best ‘medicine’ ever; a brand new Benz.

In the picture she shared on the micro-messaging platform, she could be seen in a lovely pose with her husband as they stood in front of the new whip.

Her post got mixed reactions on Twitter as people expressed joy at the gift and those who could not tuck in their envy showed it too.

Some of those who threw condemnation at the post questioned what her husband really does for a living as others asked if getting a car was the real prescription for her sickness.

Jenifer replied to those asking for his source of wealth, saying that her husband invested in her nail business.

@masochistickat: “My husband better be smart enough to get me a honda cause with they way i drive “

Can a man show his love to a woman without having money? | Legit TV