– The report said that about N116.88 billion has been withdrawn from the commission

The National Pension Commission (Pencom) has said that 331,003 retirement savings account holders who were out of jobs withdrew N116.88 billion from their contributions.

TheCable reports that this was contained in the third quarter 2019 report recently released by the commission.

Legit.ng gathered that section seven, subsection two of the 2014 pension reform act gives room for a worker who voluntarily retires, resigns or sacked from paid employment to access 25 percent of his RSA if he is unable to get another job after four months.

The report added that of this figure, 6,034 were from the private sector, 701 from the state section of the public sector and 127 were former federal employees. 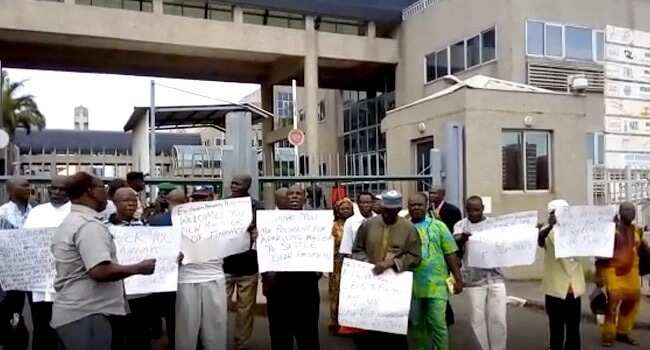 Some pensioners protesting the delay of their arrears.
Source: Depositphotos

“Approval was granted for payment of N3.67 billion to 6,862 RSA holders who were under the age of 50 years and were disengaged from work and unable to secure another job within 4 months of disengagement.

“The cumulative total number of RSA holders who were paid benefits for a temporary loss of job was 331,003 and were paid a total of N116.88 billion being 25 percent of the balances of their RSAs as prescribed by the Pension Reform Act 2014.

A statement issued on Monday, August 24, by the Pencom head of corporate communications, Peter Aghahowa, said the federal government has paid N14.92 billion to settle the accrued rights for retirees under the contributory pension scheme (CPS).

The amount would cover four months’ arrears, adding that the accrued pension rights represents an employee’s benefits for the past years of service up to June 2004, when the Pension Reform Act that birthed the CPS, came into effect.

Meanwhile, Legit.ng had previously reported that Senator Chris Ngige, the minister of labour and employment, tackled a former governor of Anambra state, Peter Obi, over the latter’s claim of inheriting N35 billion arrears of pension and gratuity.

It was reported that Ngige, who is also a former Anambra governor, said Obi’s claim is false, ThisDay reports.

The labour minister accused his successor of falsifying the history of the state all in an attempt to discredit him.

Pensioner: Buhari has not paid me since he came into power | – on Legit TV