The Muslim Lawyers Association of Nigeria (MULAN) has asked the Nigerian Bar Association (NBA) to withdraw the invitation of ex-president, Olusegun Obasanjo and Governor Nyesom Wike as speakers at its conference.

MULAN in a statement on Monday, August 24, argued that the withdrawal of the invitation on Governor Nasir El-Rufai based on his reported human rights record was selective since Obasanjo and Wike were facing similar allegations, Premium Times reported. 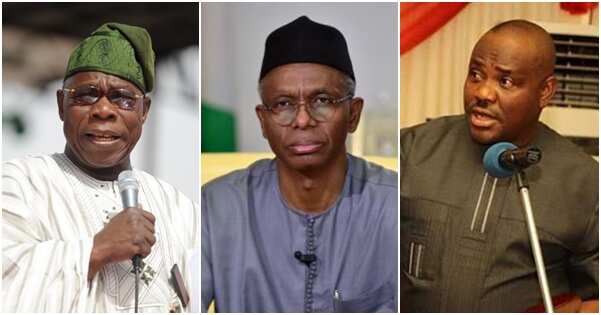 The group described the NBA’s dis-invitation of the Kaduna governor as selective justice, claiming that there were worse perceived violators of human rights also speaking at the same conference.

It accused Obasanjo and Wike of a barrage of human rights violations and disrespect for the rule of law, including disobedience to Supreme Court orders.

The group asked the NBA to either cancel the session in which El-Rufai was to speak or withdraw the invitation of any speaker who has a record of human rights violations.

MULAN threatened a boycott the conference if its demands are not met.

In a similar report, the Jigawa state chapter of the Nigerian Bar Association (NBA) has threatened not to participate in the 2020 Virtual Annual General Conference.

According to Sahara Reporters, the Jigawa chapter of the lawyers’ association made the statement following the withdrawal of invitation earlier sent to Governor Nasir El-Rufai of Kaduna state.

Legit.ng gathers that the statement was released on Friday, August 21, by the chairman of NBA in Dutse, Garba Abubakar.

Meanwhile, a former emir of Kano, Muhammad Sanusi has faulted the NBA for withdrawing an invitation previously extended to Governor Nasir El-rufai of Kaduna state to attend its annual general conference.

Sanusi on Sunday, August 23, said the decision of the NBA was sad for the freedom of speech in Nigeria.

He spoke on the issue after a meeting he had with El-Rufai at the government house in Kaduna state, The Cable reported.