– The Nigerian Police Force has been equipped for community policing

– The force was given three provisional vehicles for this laudable task

– The vehicles were given by Innoson Vehicle Manufacturing Company Limited

In the bid to support community policing, Innoson Vehicle Manufacturing Company Limited has donated three of its patrol vans to the Nigerian Police Force (NPF).

According to the force’s spokesman, Frank Mba, in a statement made available to Legit.ng, Inspector General Of Police (IGP) Mohammed Adamu received the vehicles from the local automobile firm. 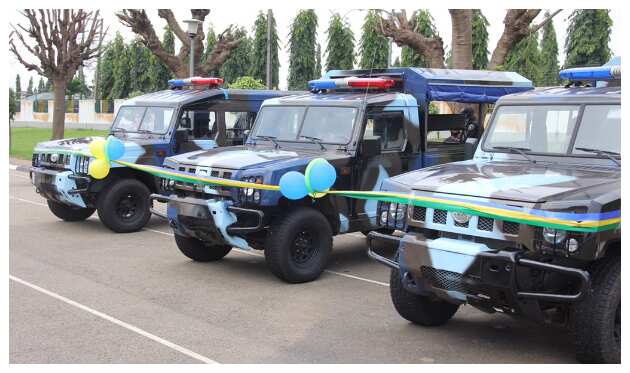 Represented by DIG Abdulmajid Ali, IGP Adamu pointed out that with “public support of this nature, the Nigeria Police Force will no doubt be able to meet its operational and infrastructural needs in combating crimes and criminality in the country.”

Ali encouraged other well-meaning individuals and corporate organisations to emulate the gesture.

Meanwhile, Legit.ng reported that the governor of Katsina, Bello Masari, had revealed those who aide banditry and all violent crimes that had ravaged the state in recent times.

During his discussion with the Emir of Kano, Alhaji Aminu Ado Bayero, on Wednesday, August 19, Masari said that these criminals get information from persons in the state.

The governor said that this was why security agencies have found it very difficult to defeat the bandits who carry out their havoc in the state.

He stated: “Most of the bandits who launched attacks on villages in the state received information from people within the communities and this made it difficult for security agencies to operate effectively.”

The state government had said that normalcy was returning to the state with farmers and others going about their usual duties.

The government attributed the feat to the efforts of the Nigerian army and other security forces operating in Katsina.

The special adviser to the Katsina governor on security matters, Ibrahim Katsina, in a statement released on Friday, August 7, said the activities of bandits have been degraded to the barest minimum by the army.