– A Nigerian man, Jibril Ismail, has shown his new business to the world as he posted pictures of the shop he newly opened

– The shop sells household needs like rice, noodles, beverages and other things that could be found in a provision store

A young Nigerian man with the Twitter name Jibril Ismail has shown how very industrious Nigerians could be in the face of societal challenges.

Ismail proudly went to the social media platform after he opened a provision shop and announced it, giving people the location of the new business in Jos.

Opening a shop is not what many young male Nigerians come to the internet to flaunt. In the pictures he shared on Twitter, he could be seen posing in front of the fully-stocked store.

The shop has things like groundnut oil, beverages, bottled water, noodles, bags of rice, and other foodstuffs on display.

He tweeted: “So I opened a shop. Location: opposite Yan’Taya mosque close to Terminus market, Jos.”

There were also other unnamed people who appeared in one of the pictures as a way of celebrating with him.

As at the time of writing this report, his tweet has generated over 12,000 likes with thousands of retweets and hundreds of congratulatory comments. 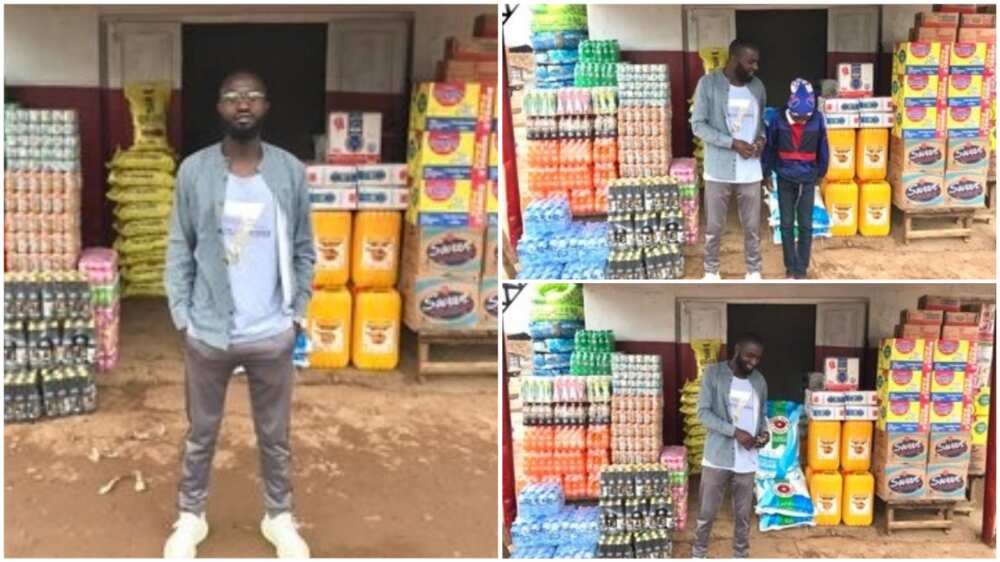 Below are some of the reaction it got:

Meanwhile, Legit.ng earlier reported that a 100-level Nigerian student identified as Jimoh John Yakubu took great honour in his work as he shared it on Twitter on Sunday, August 9.

Yakubu said that pap making is his hustle and it is what pays his bill as well as his school fees at National Open University of Nigeria (NOUN).

The 21-year-old entrepreneur and an Ado Ekiti resident added that he makes the pap in different varieties.

In the photos attached to his tweet, he could be seen standing close to prepared big buckets of the pap. Behind him is a grinder that mills the corn in the preparation process. His post gathered thousands of engagements.

It also got many positive reactions as someone even hinted at the possibility of a partnership with him.

In other related news, a young Nigerian lady, Favour Oluma, is into the craft of converting old car tyres into grand tables that can fit into any modern home.

A student of the Federal University of Technology, Minna, she could be seen in the production process of the table in one of the pictures she shared on Twitter.