– A dedicated college student, Sutar, has shown the world the true meaning of being dedicated to education

A college student identified as Swapnail Gopinath Sutar has shown seriousness to education despite having no internet connectivity in her village for online classes.

In a picture that was shared on LinkedIn by Kaisar Hamid, the young girl, whose ambition is to become a veterinary doctor, could be seen studying under a shed.

Hamid said the girl’s brother built the shed for her atop a hill where her phone manages to catch a signal for internet. 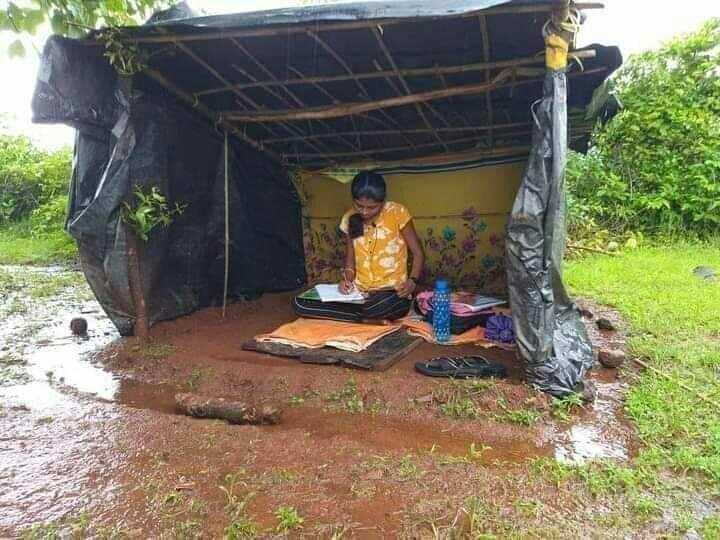 Sutar studies under a shed built by her brother atop a hill. Photo credit: Kaisar Hamid/LinkedIn
Source: UGC

He said the young girl studies from 7am in the morning to 7pm in the night under the shed.

Legit.ng notes that Sutar is from Kanakvali in Sindhudurg, India.

Reena Strehle wrote: “Incredible and an amazing Story to be shared with the world Kaisar Hamid

“She is a legend and deserves global recognition thanks to her benevolent and visionary brothers. Lucky animals.”

Susan Gibson-Kueh wrote: “I wish I could connect with Sutar, and send her a message! I have all these texts on veterinary medicine and surgery sitting on my book shelf, and would like to give them away! If she would like to have them.”

In other news, a Nigerian man, Kene Igbokwe, has joined other nationals excelling academically as he has been given a scholarship for his MSc in surgical sciences at the University of Edinburgh.

How does she do it? This woman flies airplane with just her legs, video shows her at work

Igbokwe, who made the disclosure on his LinkedIn page, said he has accepted the unconditional offer to a fully-funded MSc.

He expressed gratitude to God and his mentors for achieving such a feat.

The young man wrote on LinkedIn: “I just accepted an unconditional offer to a fully-funded MSc in Surgical sciences at the University of Edinburgh.

“It’s always been surgery and research for me. So we move.

“Next is to obtain Membership of The Royal College of Surgeons of Edinburgh, RCS Edinburgh.”