– According to @KatlegoMaseng1, Annita Dlamini started the company, which is called Ali Chilli, in 2017

Twitter user @Katlegomaseng1 took to the app to share the positive story of a young woman, Anitta Dlamini, who started a hot sauce company and named it after her mom, Alice. According to Katlego, Anitta is a 30-year-old who comes from Verulam, Durban.

In his post, he also shares that she began her hot sauce company in 2017. The hot sauce, which is called Ali Chilli, is sold at Spar and Watloo, among other retailers. The young businesswoman also employs nine people at her company.

The tweet garnered thousands of reactions from Tweeps who loved to see Anitta doing so well for themselves.

While some tweeps took the opportunity to advertise their businesses, most of them wished Anitta well on her endeavour and others even promised to buy her hot sauce.

“Let me zoom it in for my next shopping, big up sisters.”

While @MrsNkuli_12 had this to say:

“Chilli image saved, now its gonna be on my list until the doctor says I must stop eating chillies.” 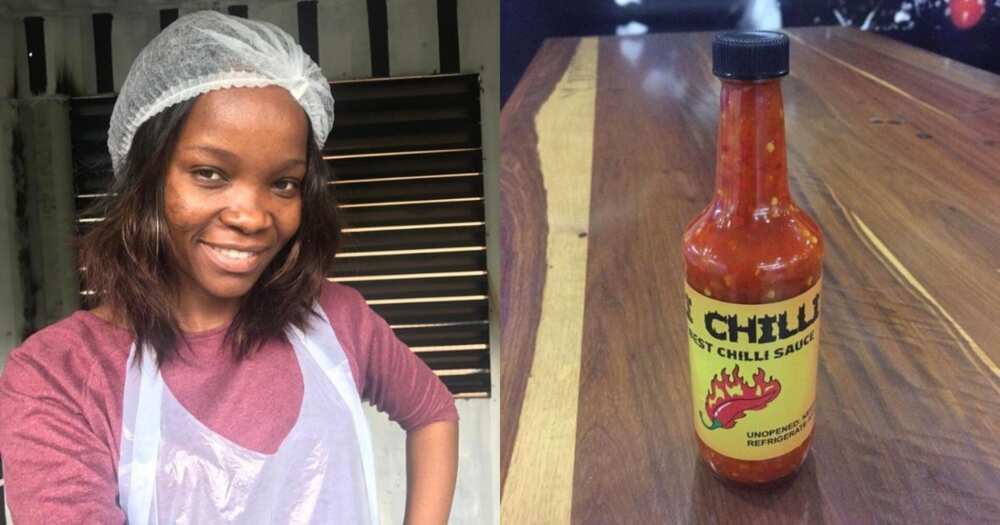 A collage showing the lady and her product. Photo source: Twitter/@KatlegoMaseng1
Source: UGC

Meanwhile, Legit.ng earlier reported that a young Nigerian man with the Twitter name Jibril Ismail has shown how very industrious Nigerians could be in the face of societal challenges.

Ismail proudly went to the social media platform after he opened a provision shop and announced it, giving people the location of the new business in Jos.

Opening a shop is not what many young male Nigerians come to the internet to flaunt. In the pictures he shared on Twitter, he could be seen posing in front of the fully-stocked store.

The shop has things like groundnut oil, beverages, bottled water, noodles, bags of rice, and other foodstuffs on display.

He tweeted: “So I opened a shop. Location: opposite Yan’Taya mosque close to Terminus market, Jos.”

There were also other unnamed people who appeared in one of the pictures as a way of celebrating with him.