– According to her, Jesus only spoke to demons and asked them to leave

In Nigeria, religion is not taken with a pinch of salt and a lot of people dedicate the better part of their lives to issues of God and spirituality.

Oftentimes, when some religious people pray, they seek to battle it out with their ‘demons’ vocally by shouting, casting and binding.

Well, this method of seeking answered prayers has not gone past the notice of popular rapper, Eva Alordiah.

The music star recently took to social media via her Instastory to address religious people who cast and shout and bind their demons.

The rapper cited the example of Jesus. According to her, Jesus only spoke to the demons and asked them to leave. Eva continued by advising people to speak to their demons because they do not have to die. Instead, they should be asked to leave.

She wrote: “The way religious folk cast and shout and bind, they forget that Jesus simply spoke to the ‘demons’ and asked them to leave. Speak to your demons. They don’t have to die die die die die. Just tell them to go.” 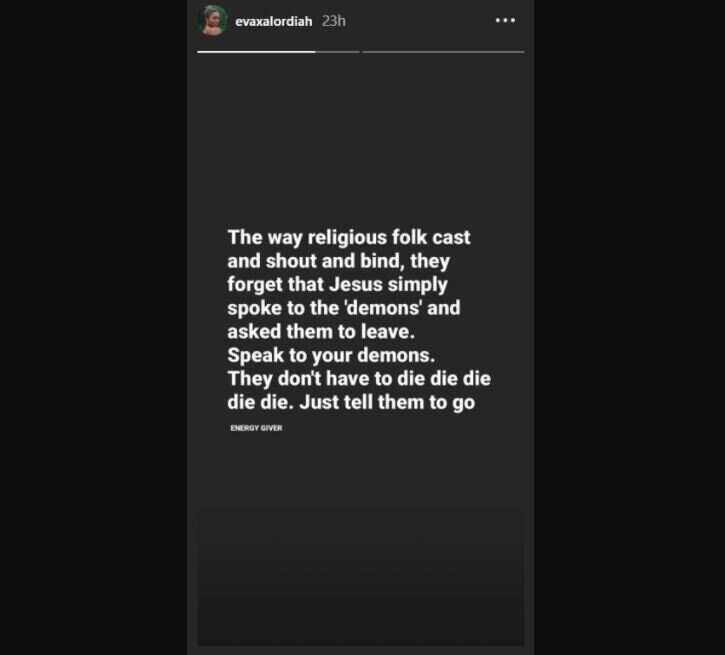 Speak to your demons, they don’t have to die, Rapper Eva tells religious people
Source: Instagram

In other religion related news, Legit.ng earlier reported that Nigerian music star, Waje, recounted how she was banned from singing in the choir after she got pregnant as a teenager.

The So Inspired crooner said that she got into a relationship in SS3 and that it gradually went from puppy love to being sexual.

She also spoke on how she eventually told her mother about her pregnancy. According to her, she opened up to her mum about her condition after she was five months in. She said that she even wrote her WAEC while pregnant and nobody knew.

The singer then spoke further on how she was stopped from singing in the choir as a result of her condition.