A video of a group of baby pigs trying to save a fish has gone viral on social media and has got people talking about how compassionate animals could be.

There is no doubt that animals are compassionate and they go out of their way to help one another, the viral video has further proven it.

In the video, the baby pigs found a fish lying lifeless on the floor and they used their snouts to push it into a nearby river. 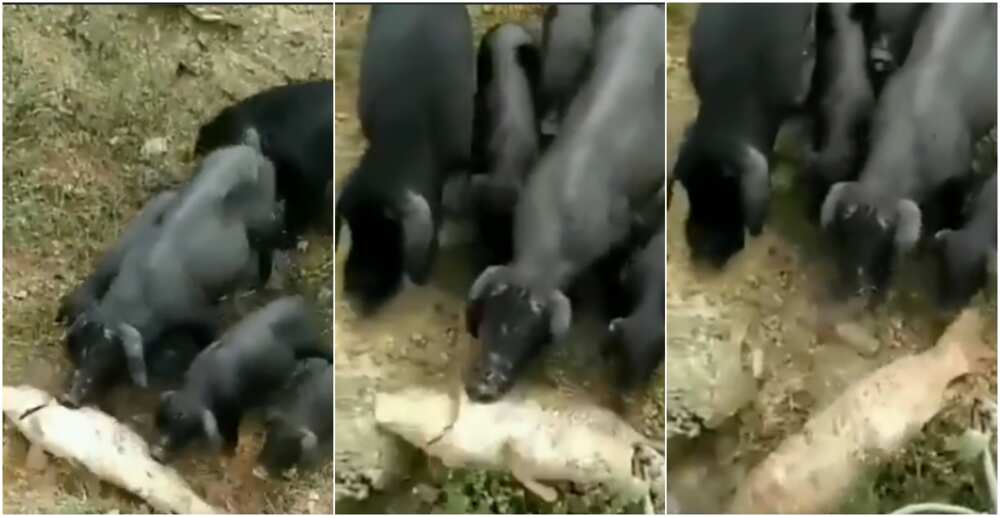 The baby pigs tried to rescue the fish by pushing back into a river. Photo credit: @susantananda3/Twitter
Source: UGC

The baby pigs were aware of the fact that fish were created to survive on water and not on land, and when they found it on the latter, they wasted no time to push it back to where it belonged.

Unfortunately, the fish did not survive. It must have been on land for a while before the baby pigs tried to rescue it.

Tweeps flooded the comment section of the post to express their opinion about the baby pigs’ kindness.

Twitter user with the handle @Pradeep76564779 wrote: “Whether it was dead or live, doesn’t matter. Intention was noble. Even people run away from the scene where injured humans battling for life.”

Another user with the handle @savehind wrote: “Animality is sometimes better than Humanity.”

@giviswa wrote: “Am I only seeing or others also- animals are becoming more humane than humans!”

@justlalit wrote: “The fish looks dead. The swines probably don’t realise that but nevertheless they pushed to water to save it’s life.”

In other news, elephant shrew, also known as sengi, has been rediscovered in Africa after 50 years of hearing nothing about the high-profile species.

The animal, which has a long tail and a trunk-like nose, was found living in well-preserved habitat in Djibouti.