The Brazilian failed to help his French League side overcome Bayern Munich in the final of the European championship in Lisbon last weekend.

Kingsley Coman scored the only goal that propelled the German champions to their sixth UCL glory on Sunday, August 23.

However, after the final whistle, the Brazilian was left heartbroken and tearful and was reluctant to receive the second-place medal as reported by SunSport.

And Ferdinand believes it was ‘disrespectful’ for the former Barcelona star to be persuaded before going ahead to receive his losers’ medal. 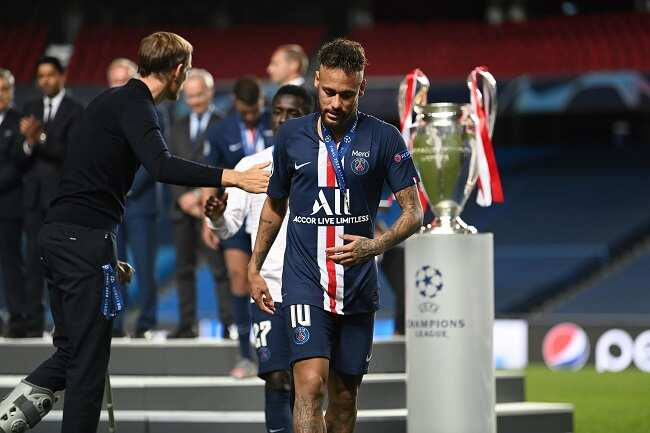 Neymar came close to scoring for the Parisians in the first half but Manuel Neuer stopped the forward from finding the back of the net.

Meanwhile, the attacker was not budging until PSG’s sporting director Leonardo Araujo consoled him but his action on return to the pitch disappointed Gary Lineker and Ferdinand inside the BT Sport studio.

Lineker said: “Looks like they’re trying to persuade Neymar to go up and collect his runners-up medal.”

Ferdinand then responded: “He has to go, you can’t sulk. “You’ve got to show some respect for the opposition when they go up there and get the trophy.”

It was Bayern’s David Alaba who first consoled the 28-year-old while PSG president Nasser Al-Khelaifi while lining up to pick up his award.

Legit.ng earlier reported that Neymar has taken to social media to pass his heartfelt congratulations to Bayern Munich following the German side’s triumph in the Champions League.

Bayern, who have enjoyed a scintillating campaign stunned Neymar’s PSG 1-0 in Lisbon on Sunday night, August 23, to win the European title.

Kingsley Coman’s 59th header proved the difference in the highly-contested match as the Bavarians strolled to victory. Neymar, having inspired PSG to a historic berth to the finals was hoping to lead the French side to glory.