– Among the shoes are that of late NBA legend Kobe Bryant

The 33-year-old is one of the late basketballer’s friends, colleagues, fans, and followers, who remembered him on the day he’s supposed to clock 42 – Sunday, August 23.

The One Dance crooner took to his Instagram story to show off his massive collection of expensive shoes including several pairs of Kobe Bryant signature shoes. 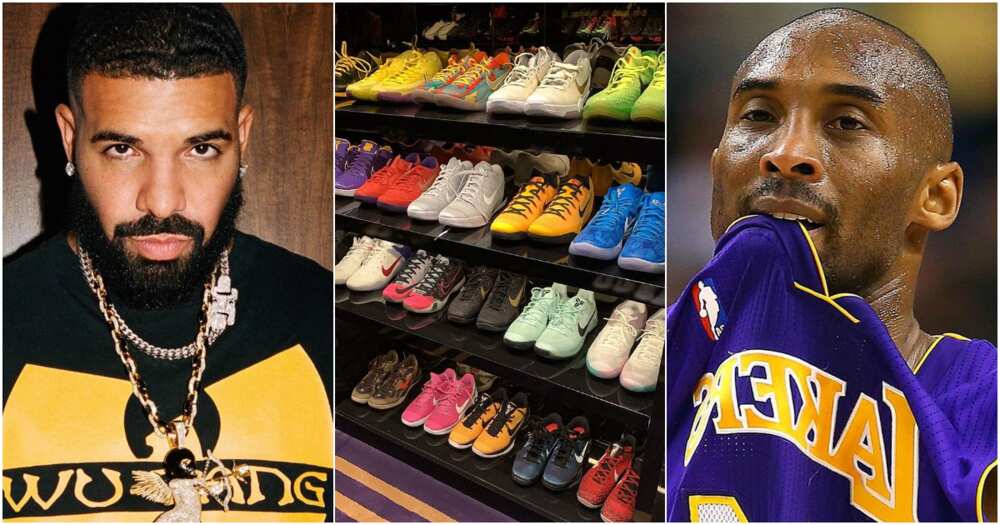 After the untimely death of the legendary basketball player, the sale of Kobe Bryant’s shows at Nike was put on hold. Meanwhile, nearly all of his sneakers available in Nike’s inventory was bought up by fans.

But the rapper seems to have dozens of his shoes and he flaunted them to celebrate the posthumous birthday of the late basketball player.

He also has a pair of the Nike Kobe 9 EM Low Chinese New Year shoes.

Watch the video of his shoe collections below:

In other news, Legit.ng earlier reported that Drake showed off his N2.5bn mansion online.

The Chicago Freestyle crooner showed off his lit crib in his music video for his track Toosie Slide. The music video showed Drake jamming all around his home.

His mansion, which is situated in his home town of Toronto, Canada, looked like something that people only see in movies or build in Sims, with cheats.

Who is Tiffany Stewart and what is so special about her? Her biography in detail

Drake built his $6.7 million (N2.5 billion) home from the ground up, back in 2016. It has a jaw-dropping all-white marble kitchen, a basketball court, an indoor pool and so much more.

Skales: I started singing and rapping before I heard about Drake | Legit TV