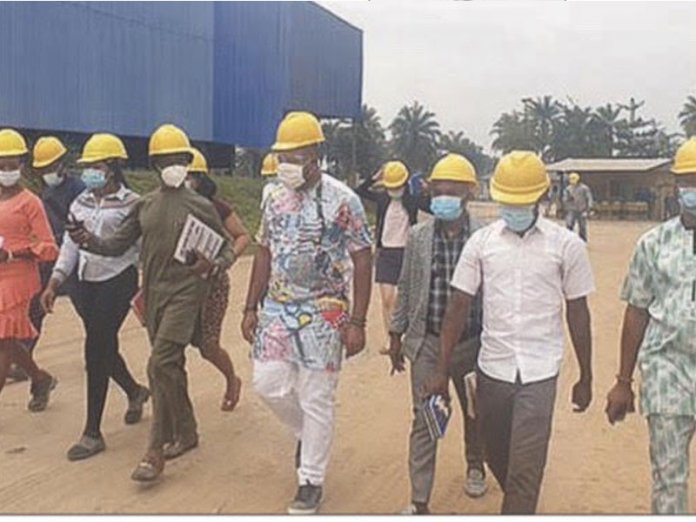 As the panel of inquiry set up by the Abia State government to investigate allegations of slavery and maltreatment of Nigerian employees levelled against Inner Galaxy Steel Company, a Chinese firm, commences sitting tomorrow, all eyes are on the panel to do a good job, Davidson Iriekpen writes

After much hue and cry by the public over allegations of slavery and maltreatment of Nigerian employees by Inner Galaxy Steel Company in Obehie, Ukwa-West Local Government Area, the Abia State government has set up a Panel of Inquiry to investigate activities at the company and make appropriate recommendations to the government.

A statement by the Secretary of the committee, Mr. Sam Hart, said the committee was set up in a bid to get to the root of complaints of unfair practices, levelled against the company.

It said the committee will hold a public hearing to take presentations and submissions from members of the public and interested individuals and organisations with verifiable information on goings on at the company that are contrary to acceptable practices. He added that the public hearing will hold at the Aguiyi Ironsi Conference Centre, Finbarrs Road, Umuahia on August 25, 2020.

Hart enjoined those wishing to make presentations at the Hearing to either do so orally or to submit memoranda to the committee.

Inner Galaxy Steel Company Limited is a steel rolling mill which commenced operations in 2017. The company was registered with the Corporate Affairs Commission (CAC) 2012. For the years it has been in operation, apart from employing thousands of people in Abia, Rivers and other states in the South-south and South-east regions, it has also provided basic amenities to its host communities and enjoying their cooperation.

However, penultimate week, the Internet/social media suddenly went agog following series of tweets by an unidentified person with a twitter handle, @Truthfully83. In a series of tweets, the twitter who described himself as a private investigator, accused the company of physical assault on the workers, sexual harassment and bad working conditions, among others. The unnamed person behind the said account claimed to have secured a job in the company to experience the maltreatment of the workers, and stated that the Nigerian employees were being sacked at will and threatened with soldiers and police.

“Male Nigerian workers are physically assaulted, why their female counterparts are sexually assaulted without any consequence. Chinese Master will use derogatory words on Nigerian employees, and you dare not talk back at them because the consequence is grievous. After the physical assaults you will get, you will still be sacked. Chinese Master will boast of killing you and getting away with it.

“Nigerians are treated worst than second class citizens. The Chinese treat their Nigerian employees as lesser humans in their soil. For over three months and counting, Inner Galaxy Group has been holding workers on hostage because of COVID-19. They locked the gates, denying workers access to go home. If you dare complain, the @PoliceNG DPO of Obehie police station will be called to arrest you.

“Workers are camped in a prison-like accommodation provided by the company before now. See where Nigerian workers of Inner Galaxy Group sleep, after 13 hours of tedious job daily. It is truly heartbreaking to see what fellow Nigerians are reduced to because of government insensitivity, and the high rate of unemployment. Chinese now feel they are doing us favour, by treating Nigerians as slaves in our own country, in the area of employment.”

He also tweeted about a former employee of the company whose leg was amputated as a result of an injury he suffered in the factory but has not been compensated till date.

But the steel company has since refuted the allegations of running a “modern day slave camp” in its facility. In a statement by its lawyer, Nnamdi Nwokocha-Ahaaiwe, the company described the allegations as “a deliberate fabrication, mischaracterisation and misinformation”.

On alleged imprisonment of workers, Nwokocha-Ahaaiwe noted that there had been no such instance. He said: “With the onset of the COVID-19 pandemic worldwide, individuals and companies were confronted with a situation of unprecedented crises. Our clients had to determine what to do in respect of about 40 per cent of their workforce who live and come to work from Obigbo and environs in Rivers State, which is about 10 minutes’ drive from the company’s premises.

“This was because the Rivers State government had announced that it was going to completely lock its borders with neighbouring states, of which Abia State is one. This meant that those employees of our clients who live and come to work from Obigbo and environs will be unable to come to work for a period which it was difficult to determine as no one knew when the pandemic would be over.

“Most states, including Abia, announced lockdowns and curfews such that even intra-state movement became cumbersome. It became clear that for a long period, our clients will be unable to operate at full capacity, rendering many workers redundant. This is because the main input of production of our clients is scrap iron and the suppliers send trucks/trailers of the materials from all corners of the federation, ranging from Sokoto, Maiduguri, Lagos, etc.

“The environment and conditions prevalent in big factories and plants such as those operated by our clients are such that if very strict safety protocols are not implemented, it takes only for one employee to bring the COVID-19 virus to the plant from home, and it will quickly spread among workers in the factory/plant until it becomes uncontrollable.

“In one company in Sagamu, Ogun State, about 107 employees contracted the COVID-19 virus within a 48-hour period and the factory was shut down by the authorities. To ensure that there was no spread of coronavirus, Inner Galaxy immediately instituted very strict COVID-19 protocols, providing one mask every day for each worker and making provisions for over 55 hand-washing/sanitising stations all over the premises.

“The problem was that there was no way of guaranteeing that when the workers return to their homes, they would keep to the same safety measures implemented within the factory complex. The management called a meeting of all the workers and made an offer: those who agree to stay within the company premises until the restrictions in movement are relaxed will be housed in temporarily, hastily erected accommodation.”

Nwokocha-Ahaaiwe said workers who could not stay, either because of their families or for other reasons, were furloughed and would be reabsorbed when things return to normal. He disclosed that the remaining were fed twice daily, paid full salaries and bonuses, while those who left to join loved ones got monthly allowances of N15,000 pending when they would choose to resume.

The lawyer added that Inner Galaxy was a responsible corporate citizen committed to improved staff welfare and friendly relations with the host community. He said that the allegation that living conditions of the workers was subhuman because they were temporarily and hastily accommodated in modified shipping containers is mischievous and ridiculous.

He said millions of people all over the world, including in the most advanced countries live in modified shipping containers.

According to him, a trip to Apo resettlement/mechanic village district of Abuja will show thousands of modified shipping containers housing thousands of families. He pointed out that between 2013 to 2016, when the steel rolling mill was being constructed, all the Chinese expatriates working on the site which was a thick forest at the time, including the GMD of the company, lived in modified shipping containers until permanent accommodation was built, wondering how anyone could possibly expect that in the urgent COVID-19 situation confronting everyone all over the world, standard accommodation could be constructed for hundreds of workers overnight.

Nwokocha-Ahaaiwe said this is a clear case of hypocrisy by some Nigerians who expect much different and far higher standards from foreign owned companies than from Nigerian owned businesses.

On the allegations that some employees of the company who were involved in industrial accident were abandoned to their fate, the lawyer said while over N6.7million was spent on Iorliam Amos Terseer, N1.9million was spent on Elohor all on hospital bills.

“Inner Galaxy Steel Company Limited is a steel rolling mill with huge operations. Industrial accidents, while regrettable, are bound to happen and hundreds of Industrial accidents leading to fatalities (deaths) are often officially recorded in 100 per cent Nigerian owned industries every year. No fatalities have been recorded in IGS so far and the management of the company will continue to improve on their safety protocols to minimise accidents and injuries to the barest minimum possible.”

The statement read in part, “Following the review of the report of the fact-finding team sent to Inner Galaxy Steel Company today, Thursday, August 13, 2020, the Abia State Governor, Dr. Okezie Ikpeazu, has directed the setting up of a full investigative committee to look into the operations of the company to ensure compliance with relevant local and international laws.

“The committee, which has two weeks to submit its report to the governor, will be inaugurated at 11a.m. on Friday, August 14, 2020, by the Deputy Governor, Ude Oko Chukwu.”

In response to the setting up of the panel of inquiry by the Abia State government and the public hearing where anybody with complaints could now come out to ventilate it, Inner Galaxy Steel Company said it was a welcome development.

He said it was a welcome relief from the ceaseless and relentless blackmail by faceless and unidentified persons with sinister intentions who have been spreading half-truths, falsehoods, and outright lies against the company on social media.

Nwokocha-Ahaaiwe said this would be an opportunity for any person really aggrieved to step forward to state his case and be interrogated. He pointed out that the so-called “investigative journalist” had never spoken to management of the company or any of the alleged “victims” but merely published horrifying pictures while withholding critical information from the public that would have put the pictures in context thus inflaming the passions of the Nigerian public and causing outrage.

Nwokocha-Ahaaiwe concluded by stating that these few examples demonstrated how half-truths, which do not paint the full picture of events have been employed to mischaracterise incidents, urging that all those who @truthfully83 claimed have grievances regarding labour and human rights violations of Nigerian employees by Inner Galaxy Steel company should come to the public hearing to state their case and be duly cross-examined on their stories or forever hold their peace. The lawyer urged the public not to rush to judgment, or take sides when issues like this occur in future but rather put on their thinking caps and at least wait to hear the other side of the story.