– The incident was said to have happened on Sunday, August 23, at Grace and Truth Arena Church located in Asaba, Delta state

A video has emerged on social media in which some church members could be seen engaging in a physical fight with their landlord.

Reports claimed that the fight began when the landlord stormed the church and gave them quit notice.

Legit.ng notes that the incident happened on Sunday, August 23, at Grace and Truth Arena Church located in Asaba, Delta state. 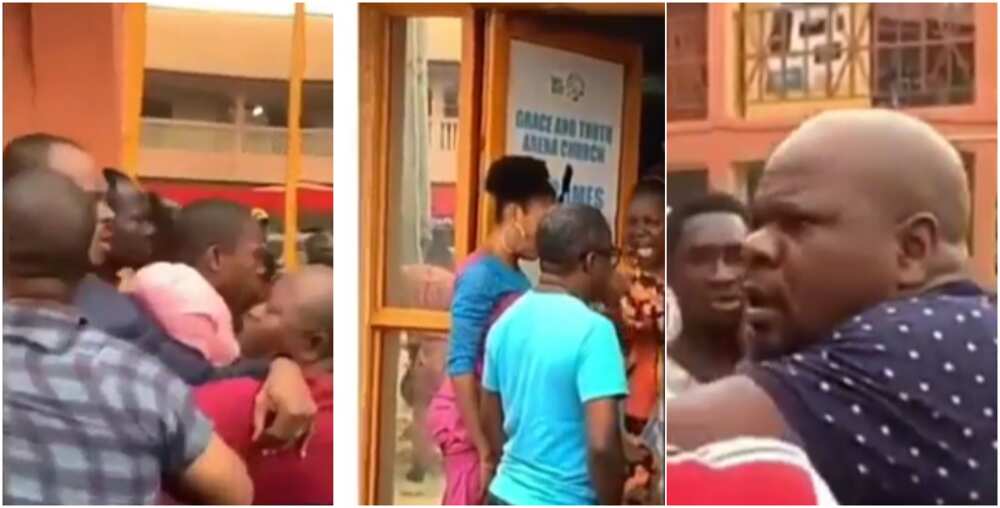 Trouble reportedly started when the landlord stormed the church to give them a quit notice. Photo credit: @mediagist/Instagram
Source: Instagram

It should be noted that church activities around the country have begun despite Nigeria’s fight against coronavirus.

Safety measure are, however, in place in order to prevent the spread of the deadly disease. But in the video of the fight making the rounds on social media, there is disregard for social distancing.

In other news, Pastor Chris Oyakhilome of Christ Embassy has condemned pastors that refused to open their churches after the Lagos state government gave the approval for religious centers to reopen.

The clergyman did not mention names but some of the pastors that have refused to reopen their auditoriums for worship include Pastor Tunde Bakare, Prophet TB Joshua and Pastor Sam Adeyemi.

Oyakhilome said in a sermon: ”If you refuse to open church for fear of being infected, you were never a believer.

Meanwhile, Legit.ng previously reported that the general overseer of the Synagogue Church of All Nation (SCOAN), Prophet TB Joshua, said a couple that contracted COVID-19 was healed by a man of God simply identified as Prophet Chris.

Learn all the top facts about the Duncan Mighty arrest

The man of God took to his Twitter page to make the disclosure, saying Mrs Bukola and her husband connected virtually for deliverance from the United States as they laid in their hospital beds.

He said Prophet Chris prayed for the couple in the name of Jesus and they testified that they had been healed.