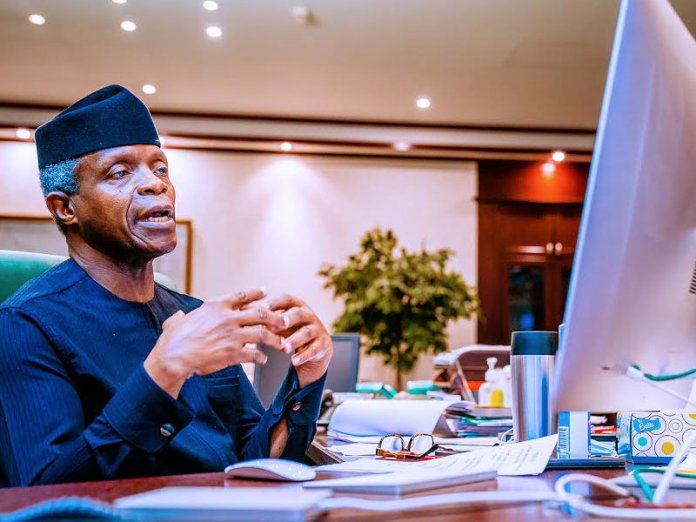 Vice President, Prof. Yemi Osinbajo, SAN has said that it will take synergy among the executive, the legislature and the judiciary arms of government to give the country a befitting justice system.

Osinbajo, who said the nation’s administration of justice urgently required reform, said such collaboration was already in the works.

He dropped this hint yesterday at the virtual edition of the Wole Olanipekun & Co (WOC) Justice Summit.

The vice president said it was important for the leadership of the legal profession, the executive, the judiciary and the legislature, to sit together and critically examine the justice system.

Osinbajo said the collaboration “to get the reform going should also include states. Working together with the sub-nationals and the federal government and their judiciaries, we can make a fundamental change.

“This is obviously a matter that we must take seriously and address, not just as professionals but we must involve all the arms of government.”

He said that the reform of the justice system could not be done by one arm of government alone.

He said: “There is a need for us to appreciate that it is a many-sided thing, complicated and we have to simply look for ways to work together.

“I am seeing that critical mass of individuals in the legal profession, in the executive and also in the judiciary who are willing to reform. We are working quite hard to see how we can all come together to make a real change.”

The vice president noted that the big question “will be the relevance of our paradigms of justice to the major socio-economic circumstances that confront us.

“The law is a social construct and makes sense only within a social context. To treat the law as something apart from society, or as a body of technical abstractions is to strip it of meaning and to alienate the legal order from the very people it is meant to serve,” he added.

He, therefore, said that a definition of justice that focused on the social and economic rights of the people was not only more meaningful, but also more just.

He listed the rights to include the right to food, shelter, employment, education and a reasonable national standard of living, care for the elderly, pensions, unemployment benefits and welfare for the physically challenged.

He argued that progress in the observance of socio-economic rights must also be prosecuted in terms of the struggle to reduce the basic problems of ill-health, malnutrition, illiteracy, and famine which daily afflict the people.

He, also, said: “Where social and economic rights are unsecured, people are unable to fully maximize their civil and political rights. For instance, access to qualitative education enhances and enriches the freedoms of expression, thought and conscience.

“Conversely, pervasive illiteracy can nullify the entire idea of the freedom of the expression. In the progressive vision, political rights and socio-economic rights are mutually reinforcing.”

He added that socio-economic rights even where wholly justiciable meant nothing unless there was a fiscal commitment to enforcement.

The summit also addressed judicial appointments, delays in the courts, the issue of technicalities, among other critical elements of the justice sector reform agenda.

Osinbajo said the process of appointing judges should be reformed.

He said: “Judicial appointments should follow a merit based system and this is absolutely necessary, we need to insist on mandatory tests and interviews for all applicants.

“We need to look more carefully at how our judges are selected. There has to be an objective process of selecting judges. We cannot insist that the only way to become a judge is to be a (judicial) career person or move from the high court to the Court of Appeal, to the Supreme Court.

“We must be able to bring in practicing lawyers, academics to be justices of the Court of Appeal and Supreme Court. If it requires rewriting the rules, then let us rewrite the rules.”

Speaking on criminal trial, Osinbajo said there was a need to ensure that criminal trials were short and judgments delivered within a reasonable time.

“Issues like rape, there are all sorts of sociological issues and barriers that need to be encountered. The way the system responds to rape cases is also a problem. So, we need a change of mindset as well as the legal system responding adequately and promptly to situations where rape is reported,” he added.

He also said that the model of adjudication in criminal cases which dispensed retributive justice was not adequate to meet the demands of justice especially in complex scenarios and situations peculiar to Nigeria.

“Given the tensions and frictions generated by contending passions and grievances, and the social reality of inequality and inequity, there is the recognition that some of the most serious situations which threaten to even, sometimes, break the fabric of society, require much more than just retributive sanctions by our judicial system, they require restorative justice to bring about healing and the reconstitution of the communities.

“This is one of the approaches that we are looking at as part of our efforts to resolve protracted ethnic and religious conflicts. In many of the cases, it is not enough to arrest, detain, prosecute and jail terrorists. There is a need somehow to find a process by which restorative justice can be brought to bear, by which the communities’ feelings of violations can be assuaged,” the Vice President stated.

The keynote speaker, Prof. Fidelis Oditah listed issues requiring urgent reform in the administration of justice system to include the reform of dispute resolution mechanisms and an overhaul of the current system that focused more on technicalities rather than the substance of cases brought before the courts, amongst others.

Oditah referring to instances where appellate courts overturned decisions merely based on technicalities without addressing the public interest implications, noted that such judicial behavior was not desirable, should be avoided and possibly prevented as much as possible through the reforms.