Sokoto state governor, Hon. Aminu Tambuwal, has described former President Olusegun Obasanjo as a statesman, who is still relevant for consultations on issues of governance and challenges of the country.

The governor, who paid an unscheduled visit at the Olusegun Obasanjo Presidential Library (OOPL) Pent House residence of the former President, said Nigerians will continue to learn from him.

Separate statements issued by the Special Assistant Media to the former President, Kehinde Akinyemi, and Special Adviser to the governor, Mohammed Bello, on Saturday, saud the governor met with Obasanjo behind closed-doors.

After about an hour meeting behind closed-doors with Obasanjo, the governor disclosed that they had a successful parley and he was happy that the elder statesman was in high spirit despite the Convid-19 pandemic atmosphere.

According to Tambuwal, “You know Baba is our leader, statesman. And it is always good for us to come around to see how he is doing, pay homage snd consult him on very many issues of governance, that is why we have come this afternoon. And, we brought him the greetings and felicitations of the good people of Sokoto state.

“We shall continue to learn from him, drink from his wealth of experience and fountain of his knowledge and wisdom on issues of governance and challenges of today.”

He prayed for the good health of the ex-President and Nigerians in general. “May he and all of us survive this period of COVID-19 pandemic,” the governor said

On goverance in Sokoto state, the governor spoke on efforts of his administration to restore parmanent stability after recent outbreak of banditry.

“So far, we have established peace in the Eastern part of the state where we have problem of banditry. Peace is returning and people are back to their farms and homes.

“Of course, we are doing our best as a government to ensure that we engender security and provide developmental opportunities and all that,” Tambuwal disclosed.

The governor, who arrived at about 2.30pm and left at 3.30pm, was accompanied by by five of his Special Advisers. 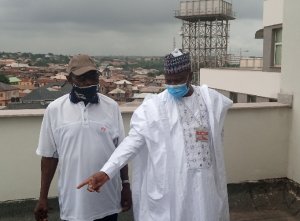 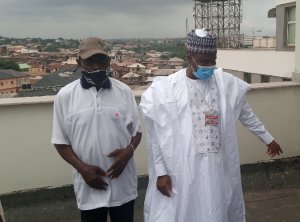