Sunday Shodipe, a suspected serial killer in Ibadan, has finally opened up on how he escaped from the police custody hours after he was rearrested by the Oyo state police command.

Legit.ng earlier reported that Shodipe was appended by the police on Sunday, August 23, weeks after his controversial escape from the watch of the police.

The 19-year-old serial killer was nabbed following the marching order given by Governor Seyi Makinde of Oyo state and the inspector general of police Mohammed Adamu mandating the force to recapture the fugitive killer.

Speaking on how he escaped from custody, Shodipe said his escape was perfected when he was taken out by a police officer to have his bath. 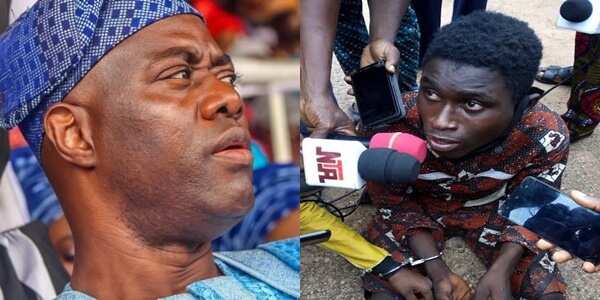 Shodipe, who had confessed to being responsible for the ritual killing in Akinyele axis of Ibadan, said he ran away when the police officer monitoring him was engrossed in a discussion “with another person.”

“The new female DPO asked officer Funsho to allow me take my bath. He cautioned me not to try to escape when I am taking my bath.

“I escaped when I saw him discussing with another person. I climbed the borehole pole and jumped the fence. The people living in the area saw me when I escaped but they did not raise any alarm,” he said.

Before his first arrest and escape, Shodipe was responsible for for the deaths of at least eight people in Ibadan.

Earlier, Legit.ng reported that Shodipe confessed on how he was able to catch on his targets.

The 19-year-old suspect disclosed that a certain herbalist who he worked for, Adedokun Yinusa Ajani (50 years), was the one sending him on such assignments.

According to Sodipe, anytime he was going for an operation, the herbalist would tell him to kneel down in front of him and he (Ajani) would make some incantations and then put something on his tongue three times.