It was a battle from start to finish, however PSG’s Thiago Alcantara had the first sight on goal as he blew his shot way over the bar in the 5th minute as the French side made their intentions clear.

Kingsley Coman had a glorious opportunity in the 10th minute, he had the chance to slot home from close range but got the ball stuck under his feet and the chance goes begging.

And three minutes later, Neymar had the chance to combine with Mbappe and the number seven got a sniff of goal but hit his shot into the legs of Boateng as Bayern survive the scare.

PSG would have taken the lead in the 17th minute, but Bayern keeper Manuel Neuer made a terrific save from Neymar after Mbappé released his strike partner. It was a solid shot and the Germany stopper got a foot to the goal-bound effort.

And against the run of play, it was Lewandowski who got closest to goal as his effort hit the woodwork in the 20th minute. The Poland striker turned and shoots in the area with a deft touch and a stinging strike. 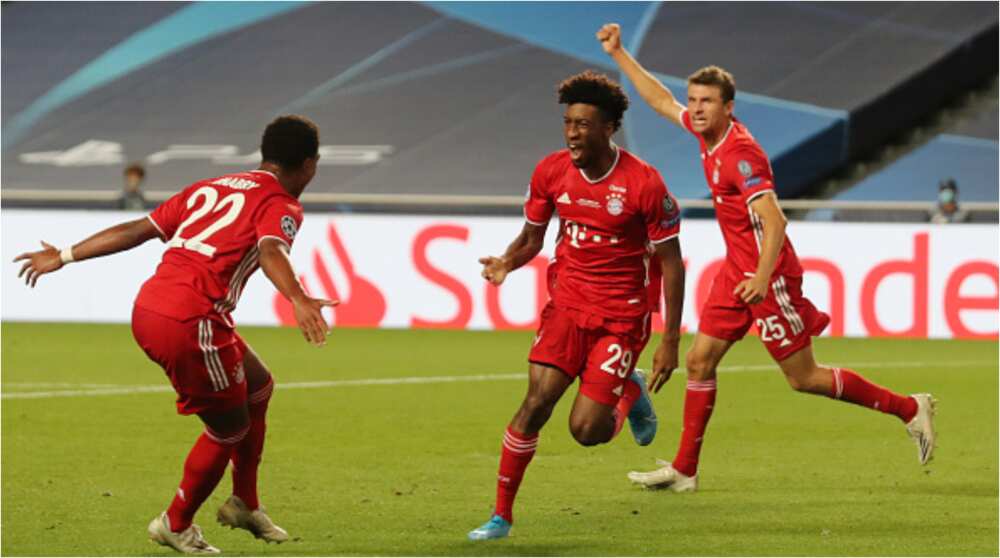 It was an end-to-end game with Di Maria fluffing a glorious chance after Ander Herrera switched the flow of play but he leathers his shot high from close range.

Both teams battled hard to get a goal in the first half but they matched each other in all departments and at half-time, it was 0-0.

The second half started brightly for the French side as they continued to press for the goal, however it was Bayern who opened the scoring through a Coman header in the 59th minute.

Kimmich lifted a beauty of a ball up to the far post and Coman was there to guide a header past Keylor Navas to put the Germans ahead.

PSG increased their prowess in search for an equalizer, with Neymar and Mbappe making frantic efforts to equalize.

There were several attempts by both sides late in the second half, but Coman’s goal seem to be enough to seal the title for the Germans. It ended; PSG 0-1 Bayern Munich.